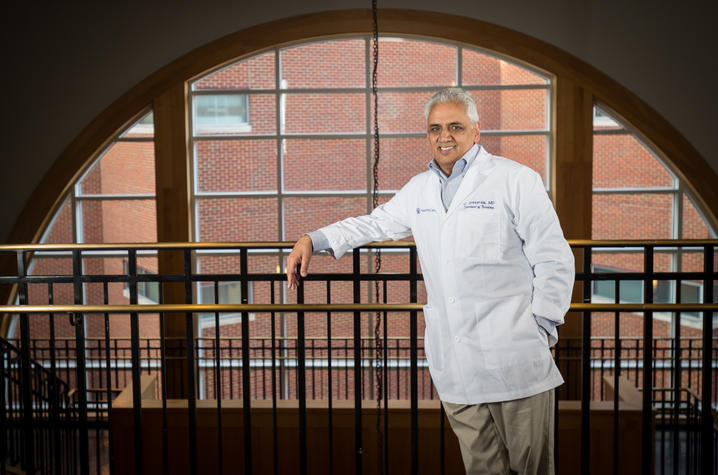 LEXINGTON, Ky. (April 2, 2021) — In an editorial recently published in CNS Spectrums, Dr. Jay Avasarala continues to raise a concern he voiced in a previous writing published about two years ago. The question at the center of his editorials – “When will we achieve racial parity?”

“It is disappointing that no clinical trial sponsored by a pharmaceutical industry or otherwise, investigating any of the disease-modifying drugs, has tackled this glaring inequity head-on,” he wrote. Throughout his recent editorial, he calls for a “radical shift” in the allotment of funds devoted to promoting drug research in minority populations.

Avasarala says improving the health of racial minorities is a public health priority that has long been sidelined. He believes there is little hope that a change will occur on that front unless policy changes are made at the funding level or the rules of publication in major journals undergo a comprehensive overhaul to mandate the inclusion of minority participation.

A big reason for his continued push for change is because the disease characteristics and phenotype among Blacks and Hispanics are typically aggressive. In his 2019 piece, he said, “The MS phenotype in the African American patient is an ideal model to study drug efficacy since the disease follows a rapidly disabling course.” He went on to explain, "African American MS patients admitted to U.S. nursing homes are six years younger but more disabled compared to Caucasian patients with MS. Since phenotypes between Caucasians and African-Americans can be clinically distinct, it is remarkable that not a single study has compared how drugs perform in such diverse groups."

For this recent analysis, Avasarala looked at baseline data from four MS clinical studies. All drugs looked at in his study gained FDA approvals between 2017 and 2020. He found that Black patients enlisted in the trials ranged from only 0.5% to 5.3%. Avasarala says that minority participation in clinical studies of NMOSD is better and more relatable to the general population than in trials for MS. However, he says the inclusion of Blacks in NMOSD studies still remains poor. According to Avasarala, minority recruitment for clinical trials for MS drugs has been on a steady decline for years – going from 7.7 percent in 2002 to about two percent in 2013.

The MS specialist closes his editorial by once again reiterating his belief that “linking funding or publication policies that make minority inclusion a priority is a first step in bridging the gap between clinical trial demographics and changing population statistics.”

Even though a couple of years have passed since he first looked into the disparities, Avasarala says he still sums up his feelings on the issue the same way he did in 2019 – hoping that he will start to see a change soon.

"The scientific community has published reams of data, but all that matters to a patient is, 'OK, doc, how can you treat me?' “What drugs would you recommend?” And we fall short for African Americans because we simply don't have the data. I feel powerless to help them. There needs to be a change. And change ought to begin in the form of a policy shift."