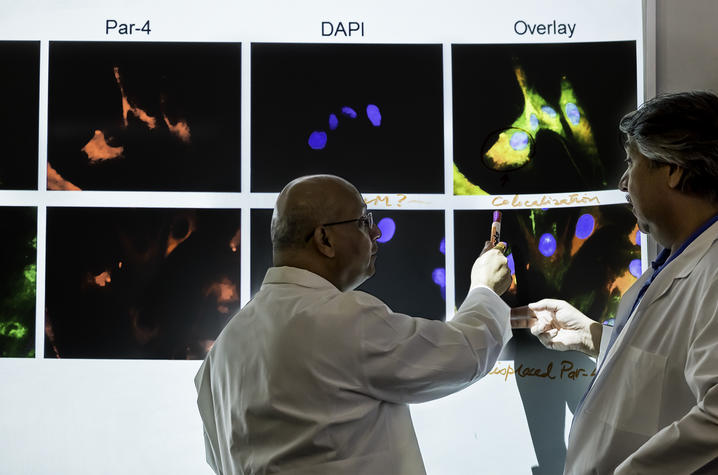 Tumor relapse is a common problem following cancer treatment, because primary tumor cells often contain therapy-resistance cancer cells that continue to proliferate after the therapy-sensitive cells have been eliminated.

The findings indicate that this naturally generated PAF could potentially be harnessed to target neighboring or distant cancer cells to overcome metastasis and therapy resistance in tumors.

"This new information could positively impact how physicians plan their treatments, so as to use the sensitive cells in the tumor to release this peptide to help eliminate the resistant cells," said Vivek Rangnekar, principal investigator and Alfred Cohen Chair in Oncology Research with the UK College of Medicine's Department of Radiation Medicine. “We are developing PAF against therapy-resistant tumor metastasis for which no other treatment options are available."

Markey researchers Nikhil Hebbar and Ravshan Burikhanov from Rangnekar’s team were the first two authors on the study, which also involved a partnership with Dr. Kojo Elenitoba-Johnson at the University of Pennsylvania.

Rangnekar's team first announced the generation of the cancer-resistant Par-4 mouse back in 2007. Since then, his team's work has spawned numerous research projects focusing on preventing and treating many types of cancer, including Markey oncologist Dr. Peng Wang's clinical trial using the anti-malarial drug hydroxychloroquine to induce Par-4 secretion.