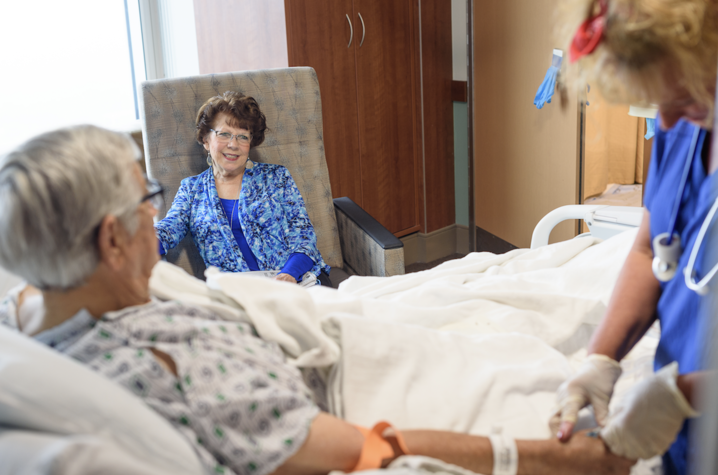 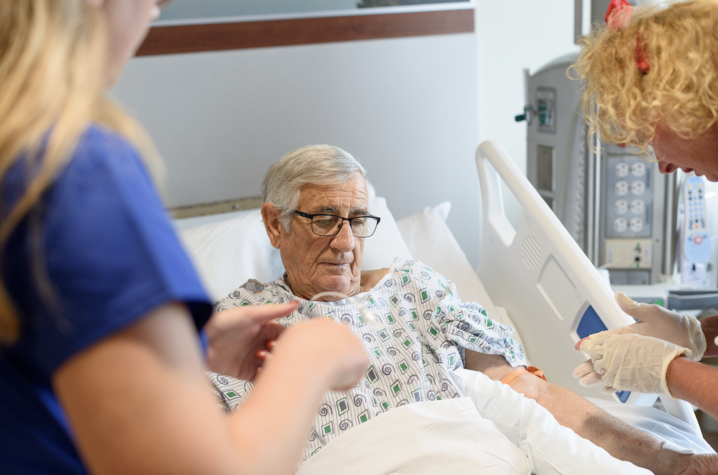 LEXINGTON, Ky. (Oct. 4, 2018) –When Lawrenceburg resident Bobby Roark began having some discomfort in his back several years ago, he went to the doctor expecting a run-of-the-mill kidney stone diagnosis.

Instead, the CAT scan showed liver abnormalities, requiring a biopsy. Roark was then diagnosed with a malignant lung neuroendocrine tumor, which had spread to his liver.

His local pulmonologist referred him to UK HealthCare, where surgeons decided a resection of the tumors might be too dangerous. He then met with University of Kentucky Markey Cancer Center medical oncologist Dr. Lowell Anthony, who specializes in these neuroendocrine tumors.

Roark received a combined oral chemotherapy of capecitabine and temozolomide​ (known as CAPTEM) to shrink his tumors. However, Roark – who has a history of heart problems – had a heart attack shortly after, which led to a transient ischemic attack (TIA), also known as a mini-stroke. He was taken off CAPTEM and given temozolomide alone, followed by everolimus, which was safer for his heart.

For roughly a year, his cancer remained stable. But in 2016, his tumors began growing again, mostly proliferating in the liver. Despite a hepatic artery embolization to kill the blood supply to the tumors, the cancer continued to grow, and a gallium (Netspot) scan in 2017 showed that his liver was close to rupturing.

Roark was out of options – until early this year, when the Food and Drug Administration (FDA) approved a new peptide receptor radionuclide therapy (PRRT) called Lutathera specifically for neuroendocrine tumors occurring in the pancreas or gastrointestinal tract. Patients who receive this therapy have failed standard of care and/or have cancer that continues to progress.

Anthony, who was among the first oncologists to run clinical trials with the therapy dating back to 1995, was eager to bring the newly FDA-approved therapy to Markey. In June 2018, Roark became the first Markey patient to receive a dose of the therapy.

“I didn’t have anything to lose,” Roark said. “Overall, I’ve done extremely well with it.”

Lutathera is a radioactive drug that works by binding to a part of a cell called a somatostatin receptor, which may be present on certain tumors. After binding to the receptor, the drug enters the cell allowing radiation to cause damage to the tumor cells. In other words, the “hot” radioactive drug is encased in a “cold” drug, which allows it to move throughout the bloodstream safely. Once it reaches the tumors, the cold drug wears off, allowing the radiation to kill the cancer.

Potential patients are first screened using the Netspot scan to determine whether the therapy will be effective for their type of tumor. Then, therapy is administered in up to four total doses, given once every two months. Prior to receiving the drug, patients receive a 4-hour amino acid infusion to protect the kidneys, followed by the 30-minute Lutathera infusion. Because of the active radiation, special precautions are taken while administering the therapy, and patients are given specific instructions around limiting close contact with others for several days after.

“Studies show that Lutathera is an extremely effective treatment against these types of pancreatic or GI tumors,” said Anthony. “When it comes to aggressive neuroendocrine tumors, the realistic goal is generally not cure, but rather control of the disease and a good quality of life for the patient. As someone who’s been involved in research on this therapy for more than two decades, I’m thrilled that it’s now FDA-approved and that we are able to offer it here at Markey for our patients.”

The UK Markey Cancer Center is the first and only cancer center in Kentucky to offer Lutathera for certain neuroendocrine tumors. Anthony expects to see roughly 30 to 40 patients a year who may be eligible for the therapy.

Meanwhile, Roark continues to do well – he’s already back to working every day and has so far completed three rounds of Lutathera. He was grateful to have access to such a new, unique therapy so close to home.

“Until you have the need to, I don’t think the majority of people in Kentucky appreciate what Markey does here,” Roark said. “I can’t say enough good things about Dr. Anthony – he’s been right with me through this whole process.”