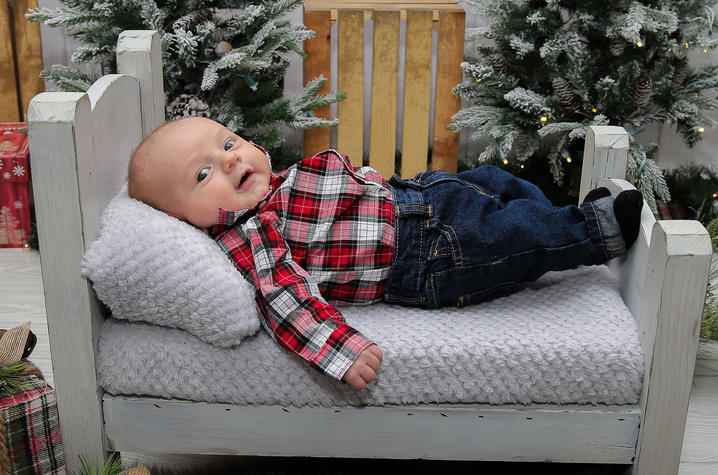 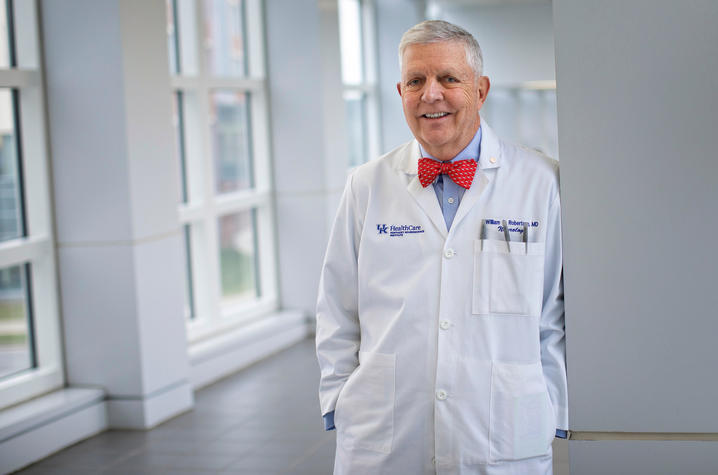 LEXINGTON, Ky. (March 19, 2020) — The Smith family was adjusting to their new life as a family of five when they got a phone call about their newest member. After only a week and a half of having their son safely in their arms, Chris and Heather Smith were told to get to UK HealthCare’s Emergency Department, as soon as possible.

"We dropped everything and left 20 minutes later," said Heather Smith. The drive to Lexington was a long one - filled with fear and uncertainty - taking them more than two hours away from their home in Greenup County.

"At first, we were hopeful that it was just a mishap and that the result was incorrect," explained Smith.

Granger Lee Smith was born on Oct. 30, 2019, weighing 7 lbs. 9.8 oz and stretching 20 ½ inches long. Besides a brief stay in the neonatal intensive care unit (NICU) due to pneumothorax, he was healthy. "Caden, 10, and Laken, 8, were so excited to be big brother and sister to this little one," said Smith.

Just days after the flood of emotions of welcoming their third child into the world, they received that phone call urging them to get to UK HealthCare. The call came from their pediatrician - telling them their seemingly perfect baby boy had abnormal results on his newborn screening for Spinal Muscular Atrophy (SMA). This disease is the number one genetic cause of infant death despite it being considered rare.

"No one imagines they would be put in this situation," said Smith.

Once arriving in Lexington, little Granger and his parents were met in the emergency department by Dr. Neil Toupin from neurology and Paige Sturm from genetics. The two explained an assessment and further testing were needed. Those things taking place the next day and then about a week later - it was confirmed - despite not showing any symptoms, Granger had SMA Type 2.

"To have someone tell you your child has a rare genetic disorder is heart wrenching," said Smith.

SMA causes weakness of muscles due to cells dying in the spinal cord and brain stem. Those cells die because they do not have a necessary protein. "SMA is a disease that is progressive," explained Granger's doctor, Dr. William Robertson, a neurologist and professor in the University of Kentucky College of Medicine.

Before the diagnosis, the Smiths had never heard of SMA. "Chris and I were not aware that we were carriers of the gene until this. We have no family history of SMA." Doctors caught Granger's SMA because of a recent change in state regulations that requires all newborns to be screened for the disease. Dr. Robertson says detecting the problem as soon as possible is crucial, "Because the cells are dying daily … literally."

Before the now mandatory screening, a child would only be diagnosed with SMA after showing symptoms. "The pediatrician and the parents would become concerned because the child wasn't rolling over, not sitting up, or unable to walk," said Robertson.

There are currently two treatment options once there is a diagnosis. Robertson says with either option, acting quickly is key, "The earlier we treat, the greater the chance of having a normal life."

The first treatment option utilizes a medication that manipulates one of the genes that is involved in the disease and allows that gene to make more protein. The medication is injected into the spinal cord, which then goes to the cells allowing them to make the needed protein. Robertson says the medication does leave the system after time passes, so the injection has to be repeated every four months.

The second option is a relatively new treatment. The Food and Drug Administration approving it in May of 2019. "This one is actually true gene therapy. The other therapy is manipulating the genes; this is actually providing the gene to the patient," said Robertson. Another big difference between the two – "We believe it is a cure." It is a one-time treatment versus a spinal injection every four months. It also has a big price tag.

"They told us that it was the most expensive medical drug on the market at 2.1 million dollars," remembered Heather Smith. The family deciding they didn't care what it cost, they wanted to make sure Granger had the best possible chance at a healthy life. With the help of insurance, choosing to move forward with Zolgensma.

"It is truly a life-saving treatment because these children would all die or be placed on a ventilator, require a feeding tube, never move, never sit, never roll over, so have very little meaning to their life if they weren't treated," said Dr. Robertson.

After deciding on the treatment, the Smiths had to choose where Granger would undergo the gene therapy. "We were very hesitant with having the Zolgensma treatment at UK since they had never done it before and a hospital the same distance from us had done it multiple times," said Smith. However, it was their very first interaction in the emergency department with Dr. Neil Toupin and Paige Sturm as well as their confidence in Dr. Robertson's experience and knowledge that gave them peace in choosing UK HealthCare.

"What I hope for all my patients is that they know, they can feel that I care about them as a family and as individuals…and they can count on me not just as a physician providing a medication," said Robertson.

Waiting for insurance approval was the longest part of the process for the family. Smith remembers vividly the day they got the call her little boy was approved for Zolgensma, "We cried with joy knowing that he was going to have a chance."

On Dec. 11, 2019, at just a few days shy of six weeks old, Granger underwent the gene therapy infusion at UK HealthCare’s Kentucky Children’s Hospital. "Apart from all of our children's births, this was one of the best days of our lives," said Heather Smith.

The infusion lasting one hour. In that time, the needed genetic material traveling through Granger's tiny body, into the nervous system, and depositing in the cells that had yet to die. After being observed for an hour following the infusion, Granger was headed back home to Greenup County.

"Granger is doing amazing. He is four months old now and is rolling over front to back and back to front, which is right on track for development." Smith says the only complication Granger has with his SMA is hand tremors. However, she says that does not seem to hinder him in any way.

While it was an unexpected way to start their life as a family of five, Smith says they are thankful for the path they took, "We feel that Granger was picked for us for a reason. He has humbled us and filled our hearts with so much love."

It is because of this path the Smiths learned that their other two children are carriers of SMA. The newborn screening requirement was not in place when Caden and Laken were born. After Granger's diagnosis, they were told Caden and Laken needed to be tested for the disorder. "We were already devastated that Granger had it and now we had to have our two otherwise healthy children tested as well." Smith says they were relieved to find out neither had SMA, but they are both carriers of the gene. She says that information will be beneficial for them later in life when they want to start their own families and they have their little brother to thank for that preparation.

"Everything happens for a reason and we are just thankful every day for our Granger Lee," said Smith.

Since Granger's gene therapy in December, Dr. Robertson has performed the new life-saving treatment on one other newborn at UK HealthCare. He is hopeful the cost will come down in the near future.