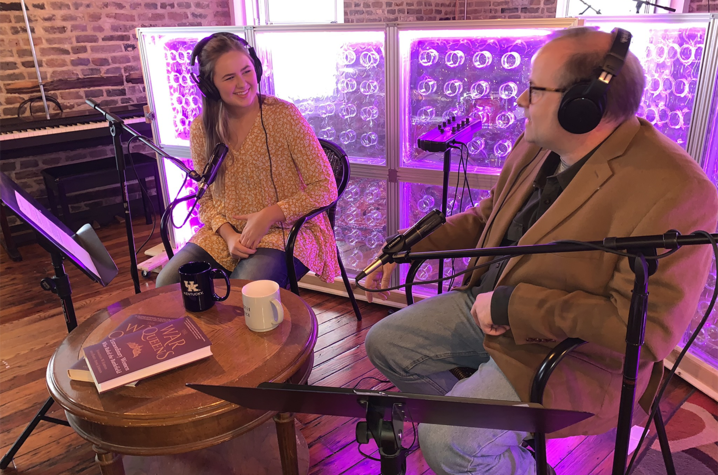 Emily and her father wrote "War Queens" after learning about influential women throughout history.

LEXINGTON, Ky. (May 20, 2020) — Emily Jordan, a junior honors student at the University of Kentucky College of Nursing, and her father, Jonathan W. Jordan, celebrate the forgotten heroes of the past in a new book about woman war leaders.

Their new book, The War Queens, tells the story of the wartime tactics of some of the most powerful female leaders in history.

The father-daughter duo reveal in their new book the extraordinary power and potential of women who walked through war’s kiln and emerged from the other side.

The book has received rave reviews in various publications such as The Wall Street Journal and was named one the 'Five New Nonfiction Books to Read While You’re Stuck at Home' in the Smithsonian Magazine.

Emily was inspired to write this book with her father about women leaders in wartime for her father who has written a number of books about military history, but never one on strong female leaders.

“I used to ask why and he would give me several small anecdotes about women who played small parts in wartime, but never ones that made the big decisions,” Emily said. “One day during an election season, a segment came on the TV about whether or not a woman could really lead and make the crucial judgments during a war and we decided to Google the history of it.”

That’s when Emily and her father discovered and were completely enticed by the colorful and rich history of women war leaders.

Inspired by a love of reading and writing fostered by her father, Emily set out to change up the very genre her father was established in: military history, which is currently dominated by the great accomplishments of men.

Emily and her father began the writing and research process together when Emily was in high school.

“It was definitely not easy, but completely worth it. It was a lot of 'no' and a lot of doubting myself, but my dad and I worked extra hard to push each other because we know how important these stories are,” said Emily.

It is Emily’s hope that men and women take what she has learned from these leaders and use it to overcome any obstacle that comes their way.

“Giving the great women of history a voice has strengthened my own, and I want to share that with men and women of all ages,” Emily said.

In addition to being a student nurse in clinical, Emily is an active member in the Kappa Kappa Gamma sorority, an ambassador for freshmen outreach and an intern studying addiction research.

“After I graduate from the BSN program, I hope to work as a nurse for a few years here in Lexington to give back to the community that gave me so much,” said Emily. “After that, I hope to get my nurse practitioner's degree in mental or public health. I see myself continuing research both in women's history as well as solutions to the opioid epidemic.”

“The other main topic I have looked into recently is research on the opioid epidemic here in Kentucky,” said Emily.  " have had the honor to observe the amazing work being done through university grants through the nursing research internship program and I hope to one day contribute to the cause.”

The War Queens is available on Amazon, Audible and in stores now at Barnes and Noble. A podcast series is currently being filmed for the book as well.