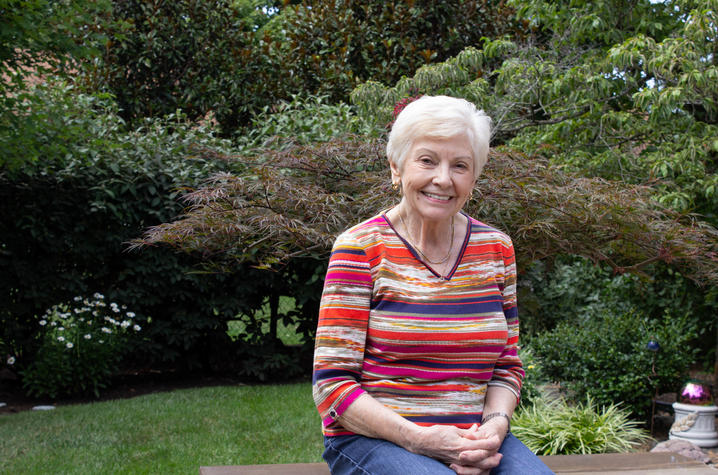 Myrte Nudd is a research volunteer for the University of Kentucky Sanders-Brown Center on Aging. Hilary Brown | UK Photo

LEXINGTON, Ky. (Aug. 5, 2019) —  Myrte Nudd is effervescent and chatty as she talks about her schedule. She teaches seniors at the Lexington Senior Center how to use their new cell phones, tablets and laptops, helps out when her church needs food for post-Mass receptions, travels to her grandson's high school graduation and to far-flung places such as western Canada, Europe, New York and even Russia. And by the way, she needs to go now because she's promised to take her twin 16-year old granddaughters on their annual shopping trip.

"It keeps my wheels turning," she said. "As long as I'm fit and fiddle to do all these things, I'll keep at it."

Also inked into her busy schedule: Myrte is a research volunteer for the University of Kentucky Sanders-Brown Center on Aging (SBCoA).

"I started doing it for personal benefit: I was going to learn about my risk for dementia," Myrte said. "But then I watched a friend struggle with memory problems. She was depressed, she was anxious and she was vulnerable. This motivated me even more to do what I could to help."

Thanks to volunteers like Myrte, SBCoA has played a role in many landmark discoveries, including debunking the theories that aluminum or mercury cause Alzheimer's, identifying so-called "AD mimics" which share the same outward symptoms of Alzheimer's but are in fact an entirely different disease, and proving that there are changes in the brain decades before there are outward symptoms of AD. SBCoA was also the first home of the famous Nun Study.

The center's leadership in efforts to improve quality of life for the aging was rewarded in 1985, when the National Institutes of Health (NIH) launched the Alzheimer's Disease Research Centers (ADC) program, granting significant additional research dollars to ten U.S. aging programs, including Sanders-Brown.  The number of grantees has since grown to 32, and SBCoA is one of only nine that has been continuously funded since the designation was launched.

Director Linda Van Eldik says that Sanders-Brown has been able to maintain its reputation as a world-class research facility in part because of its large pool of research volunteers.

"We have a very large number of motivated research volunteers," said Van Eldik. "Size does matter in this case: the more volunteers we have, the more research we're able to conduct, which advances our pursuit of a cure more quickly."

Myrte is a 14-year veteran volunteer for the Sanders-Brown longevity study, where volunteers over the age of 65 come to SBCoA for annual testing and agree to donate their brain upon their death. There are about 700 current volunteers in the longevity study, approximately 500 of whom have no memory or thinking problems.

"The Longevity Study generates a tremendous amount of data about how the brain ages," Van Eldik said. "Why do some people develop dementia, while others remain cognitively intact? The information we gain from this devoted group of volunteers is critical to furthering our knowledge and the first step towards a cure."

Myrte also agreed to be a part of a clinical trial to test a medication that might prevent dementia.

Dr. Greg Jicha, who spearheaded the trial, looked at a repurposed cholesterol-lowering drug called Gemfibrozil to see whether it might improve key markers of dementia.

"We saw that Gemfibrozil appeared to reduce hippocampal shrinkage in the brain and lower tau and Amyloid-beta levels in the brain," he said, noting that tau and A-beta are responsible for the deadly buildup of tangles and plaques that are hallmarks of Alzheimer's disease.

"As Gemfibrozil is safe, inexpensive, and well-tolerated in older people, it is a promising candidate for prevention of dementia, and the results from this study provide us a roadmap to the next phase of a larger, more comprehensive clinical trial."

"Research is necessarily slow and even slower when we can't find volunteers. Having someone like Myrte step up to the plate is critical to our mission and we are so grateful for their selfless dedication to our cause," Jicha added.

Sanders-Brown is currently enrolling volunteers (both healthy and those with cognitive problems) for almost a dozen research projects. If you're interested in helping, follow this link or call (859) 323-5550 for more information.