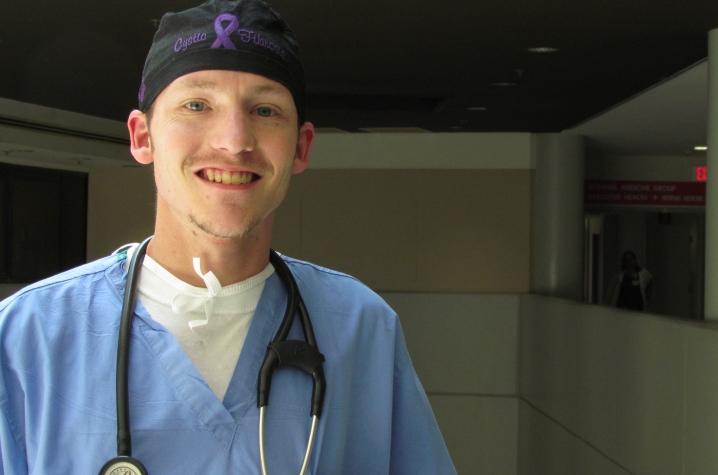 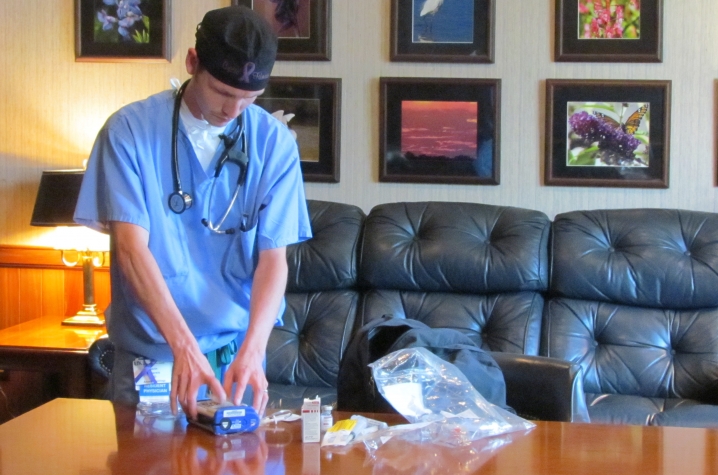 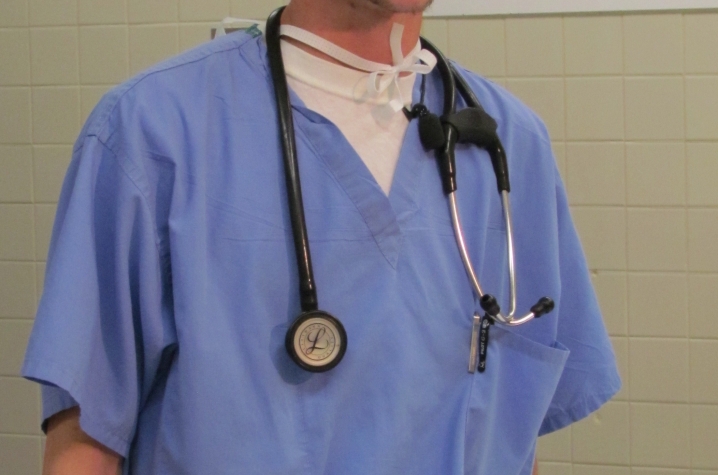 LEXINGTON, Ky. (Aug. 2, 2012) — Twelve years ago, Kevin Bauereis was a 17-year-old kid attending Conner High School in Hebron, Ky. Like many teenagers, he had big plans for his future: he wanted to become a doctor.

However, the odds were not in his favor — Bauereis was diagnosed as a baby with cystic fibrosis, a life-threatening disease that causes thick, sticky mucus to build up in the lungs, digestive tract, and other areas of the body. At the time, the life expectancy of a cystic fibrosis patient was only about 18 years of age. In a 2000 interview with the Cincinnati Enquirer, the young Bauereis said he wasn't sure if he would live long enough to make it through his medical training.

But with the help of many medications and treatments, Bauereis earned an undergrad degree at Northern Kentucky University and a medical degree here at the University of Kentucky. Now 29 years old, Bauereis just completed his second year of an anesthesiology residency at UK.

Despite his disease and the already-difficult demands of a residency, Bauereis never wanted any special treatment, says Dr. Randall Schell, director of the anesthesiology program at UK.

"Cystic fibrosis has never defined Kevin as a person," Schell said. "He asked that I not make any special alterations to his training schedules, call assignments or educational responsibilities. He just said that when the time came that he could no longer carry out his usual duties, he would let me know."

That time came earlier this year, when Bauereis' lung function deteriorated to the point of needing transplantation. In June 2012, he was officially put on UK's transplant list for a double-lung procedure. While a transplant does not cure cystic fibrosis, it can significantly improve both life expectancy and quality of life for patients.

Bauereis officially went on medical leave at the end of July and is waiting at home for his transplant. Post-transplant, he hopes to recover quickly and pick right up where he left off in his residency. He wants to pursue a career in pediatric anesthesiology, he says, because as someone who was often sick as a child, he knows what his young patients are going through. He even makes a point to try to visit new pediatric cystic fibrosis patients when they come into the hospital, just to let them know that someone out there understands.

"When I would be in the hospital growing up, the adults around me would say, 'I know how you feel' or 'I know what you're going through,' when really, most of them didn't. But now, I do understand how these kids feel, because I've been there," Bauereis said. "Plus, I don't know if it's because I'm kind of small or what, but the patients seem to be a lot less intimidated by me than some of the other doctors!"

Schell wasn't the only one touched by Bauereis' personal story. Fellow anesthesiology resident Dr. Lori Kral began working with Bauereis more than two years ago when he began his residency, but only learned about his condition earlier this year. His perseverance and dedication inspired Kral and others in their department to organize a fundraising group in his honor to help with medical costs.

"Kevin has never advertised his condition, and there haven't been any special allowances made for him," Kral said. "The last thing he would ever do would be to ask for help. But once you've met Kevin, it becomes obvious why we would want to help him."

Kral and fellow resident Dr. Melanie Witte are co-chairs of Double Lungs for Life, the fundraising group formed for Bauereis. The group has organized a golf scramble and fundraising party for Bauereis this Saturday, Aug. 4, at the University Club of Kentucky on Leestown Road in Lexington.

The scramble begins at 2 p.m. and cost per person is $75. Those interested in participating in the scramble should contact Emily Silliman at em.silliman@uky.edu.

The fundraising party will take place in the University Club clubhouse after the scramble, from 6 to 10 p.m., and is open to the public. The party will feature a silent auction, and food and drinks donated by City Barbecue will be available for purchase. In addition, the Double Lungs for Life group has created an account to accept donations for Bauereis at any UK Credit Union site. All funds raised will go toward supporting Bauereis and his wife during the transplant process.