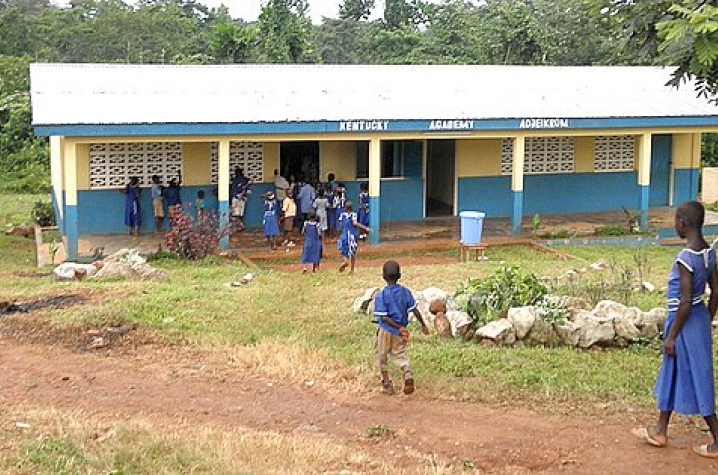 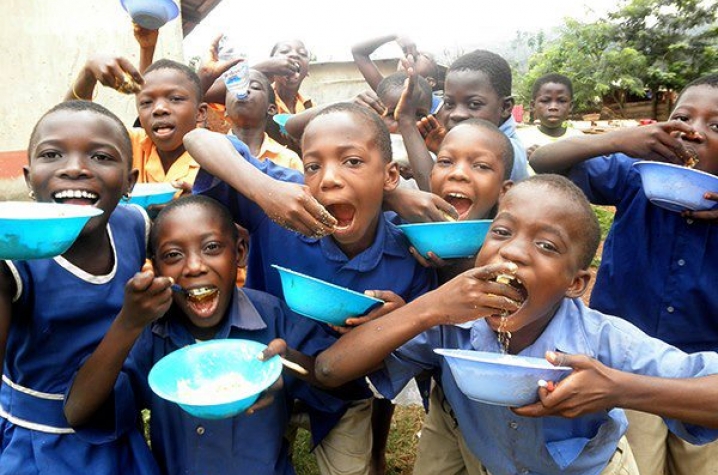 LEXINGTON, Ky. (Dec. 2, 2013) -- When Esther and Kwaku Addo came to Lexington, they left family and friends behind in their native Ghana.  But these people were not forgotten.

Kwaku and Esther left Ghana in the mid-80s -- first to Canada, and then a series of moves further and further south until they reached Lexington in 1991.  "We really didn't like the weather much until we got to Lexington," Dr. Kwaku Addo said.  Kwaku had secured a position as an assistant professor in what is now the University of Kentucky's Department of Dietetics and Human Nutrition.  The following year, Esther began her work in UK Chandler Hospital as an RN in neurosurgery and later in the newly-formed stroke unit, which is now part of the Kentucky Neuroscience Institute.

"We felt like family at UK," Esther says. "But we had no idea at first how much that would really mean."

Esther comes from a small town in the eastern region of Ghana called Adjeikrom.  So when Ghana hosted the international Africa-African American Summit in 1999, Kwaku and a group of his UK colleagues decided to attend the summit, which promotes cooperation and support between African-Americans and Africans in health, agriculture, education and other social issues. They planned a side trip to tour the eastern region, an area known for its cocoa production, and also to Adjeikrom to visit Esther's village.

"I had not been back to Ghana in about 10 years, but I was shocked by what I saw in the village, especially the infrastructure supporting early childhood education," Kwaku says.  "The conditions were awful."

On the trip back to America, fellow traveler Dr. Deborah Blades, then a neurosurgeon at UK’s Chandler Hospital, shared Kwaku's despair.  "Deborah and I felt absolutely compelled to do what we could to change that situation," recalls Kwaku.

Upon their return, fundraising began in earnest, and in 2000 a modest building with two kindergarten classrooms and an office opened in Adjeikrom. The International Book Project sent materials, and Kwaku brought UK students to Ghana every year on a study abroad/service mission to make improvements.

"We painted the walls blue and white and petitioned the local government to name our school 'The Kentucky Academy', since Kentuckians had been so supportive," Kwaku says. "Our uniforms are even UK blue and white."

But UK had only just begun to help Adjeikrom "see blue." Kwaku and Esther's network of family and friends began reaching out to their own friends to tell the Adjeikrom story. Dr. Ann Vail, director of the School of Human Environmental Services at UK, introduced Esther and Kwaku to the Kentucky Extension Homemakers Association, which adopted the Kentucky Academy as a multi-year international fundraising project.  Their efforts brought electricity, new furniture, and a dining pavilion to the academy. The Student Dietetic and Nutrition Association and the Panhellenic community also pitched in to help.

"What's really amazing about this is how many people were involved in a small way," Esther says.  "Fraternities and sororities were asking their members to donate just $1 a person. There wasn't one donor who just wrote a big check and said, 'That's done.' There were literally hundreds of people all over Kentucky doing their little part."

Add to that list of hundreds a few dozen more: guests at the wedding where Janet Mullins, one of Kwaku's colleagues, married her husband Doug.  Janet was so moved by her trip to Ghana that she and Doug asked friends and family to give donations to the Kentucky Academy in lieu of gifts so that they could start a feeding program.  Today, about 100 students ages 2-6 are fed daily at the Tietyen-Mullins Kitchen.

And they weren't done yet.

On a return visit to Adjeikrom, Esther attended church.  At the time, her town worshipped in an abandoned public school classroom. She tells this story on herself with a chuckle.

"It started to rain, and the roof was terribly leaky," she said.  "I was getting wet, so I got up to leave, and my friends started teasing me,  'Oh, you're Americanized now!' they said. 'You can't worship in a leaky church.' Well, I came back to Kentucky and told my friend and UK colleague, Lisa Bellamy, about it.  She came right back to me and said, 'We have to build a new church for them, and I want to help.'"

The same generous qualities that gave birth to the Kentucky Academy are manifested in Esther's work for SCOPE -- The Stroke Community Outreach and Prevention Education program.  Esther was one of a group of nurses -- including Bellamy, now director of education for the UK/Norton Stroke Care Network-- who initiated this program in 2008 to offer community education and awareness about stroke, which kills almost 130,000 U.S. citizens every year and leaves thousands more debilitated.  The SCOPE program provides educational programs and stroke screenings in communities and schools all over Kentucky.

Esther loves all the work she does, but she is particularly fond of the education she provides children.

"The other day, I was at my hair salon, and a little boy came up to me and shouted, 'Hey! I know you. You are the stroke lady,'" Esther said. Then the child recited the acronym he had learned from Esther: "FAST stands for Face, Arms, Speech, Time," he said. "Check the face for drooping, the arms for sagging, the speech for slurring, and call for help right away -- time is of the essence."

Esther is delighted to know that her work for SCOPE is making an impact. "Here are young children who know the signs of stroke, and one day might actually have the opportunity to use them to save someone's life," she said.

Sadly, Kwaku's work is leading the couple to Houston, where he has taken a post as associate dean for academic programs in the College of Agriculture & Human Sciences at Prairie View A&M University.  UK's Department of Dietetics and Human Nutrition will be hosting a reception on Dec. 3 so that friends and colleagues can say "mah krow" (good-bye) to Kwaku and Esther.

"We are once again headed for better weather, but I'm not certain the basketball will be as good," Kwaku said.

Esther is the last of the original group of nurses who founded the SCOPE program.  Bellamy, who is helping Esther raise money for the new church in Adjeikrom, says that they are fortunate that so many nurses still participate in SCOPE, but it's hard to let go of Esther.

"I cry every time I think about Esther leaving," Bellamy says. "She has so much enthusiasm for her causes, and she and Kwaku do every little thing they can to care for others." Bellamy points out that Esther has sold candy bars to fundraise for the church in Adjeikrom, and the Addos have postponed their own dream -- building their retirement home -- in order to support the dreams of others.