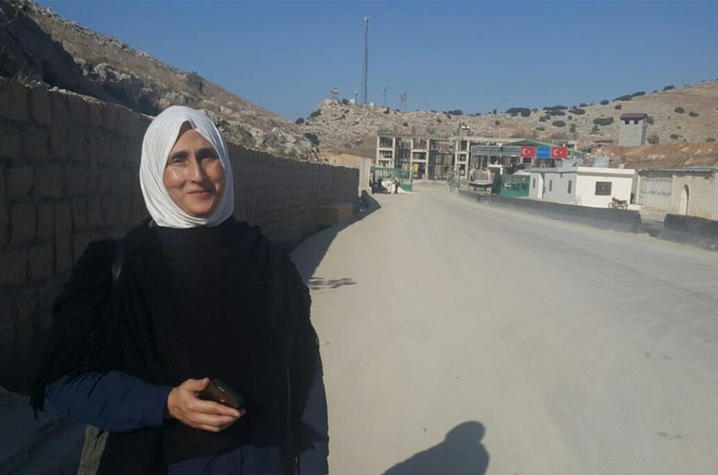 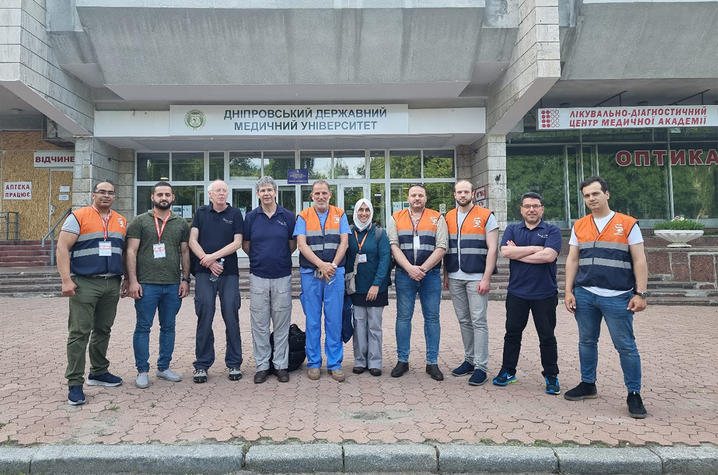 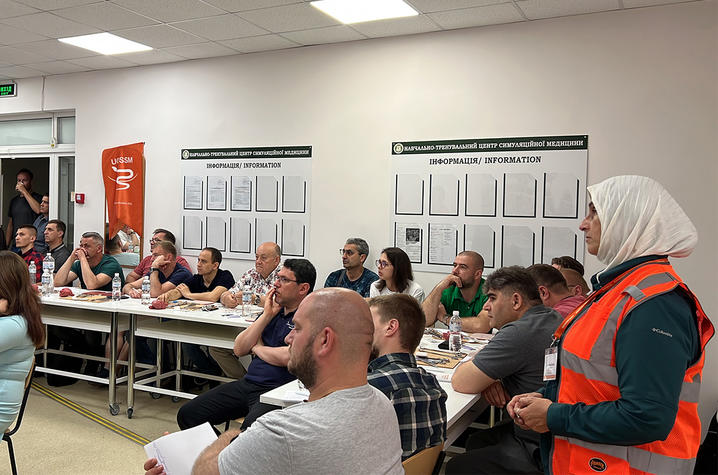 LEXINGTON, Ky. (July 27, 2022) — Khaula Sawah, Pharm.D., always felt a calling in her heart to help others as if they were her own family. To fulfill that mission, Sawah became a pharmacist, earning two degrees from the University of Kentucky College of Pharmacy, and performed clinical work in Cincinnati for much of her career. But in 2011, as the Syrian crisis began — Sawah experienced something that changed her life forever.

Born to Syrian immigrants, she watched war destroy the country that she and her family had once called home. This influenced Sawah to step away from working in a clinical setting to begin a career as a humanitarian, providing emergency medical and humanitarian relief in Syria and Turkey.

“My folks — my mom and dad, they’re from Syria,” Sawah said. “And I lived in Syria for much of my childhood. I know the neighborhoods; I have friends and family there. Seeing it being bombed — knowing people who were detained, or even killed, really impacted me. I immediately felt an obligation to help.”

Sawah has been leading medical relief in Syria for over a decade. During this time, she has carefully cultivated specialized disaster-related medical expertise. Now, with the onset of war in Eastern Europe, she is sharing that expertise with those impacted by war in Ukraine. In early June, with the help of volunteer doctors and surgeons from the David Nott Foundation (DNF), Sawah visited Ukraine for two weeks and helped train 68 Ukrainian surgeons to handle specialized front-line war zone injuries.

“We know exactly how the Ukrainian doctors and civilians are feeling, and what they are experiencing,” Sawah said. “The brutal effects of war. The fear, the helplessness, the uncertainty. This is why we chose to share our expertise we gained over the past 11 years in Syria with the Ukrainian people.”

In 2015, Sawah co-founded Union of Medical Care and Relief Organizations USA (UOSSM USA) which has supported Syria for many years. She serves as the current president and has also led the medical mission in Ukraine.

During this mission, UOSSM USA and the DNF completed Hostile Environment Surgical Training (HEST) to support front-line medical care, conducted specialized surgical procedures and visited hospitals to expand medical expertise to areas that are most in need.

“Dr. Monzer Yazi, co-founder of UOSSM, went to Ukraine in early April to assess the medical needs of the community there,” Sawah said. “When he noticed a deficit, he took charge and helped facilitate an initial four-day training in April to 37 Ukrainian surgeons. The need, however, is so urgent that UOSSM completed two more medical missions, and we joined forces for the most recent surgical medical mission in early June.”

Sawah and her team began registration for UOSSM Ukraine in March of this year to establish a relief organization local to Ukraine. By April, the organization became fully registered and is currently being supported financially and administratively by UOSSM USA.

“It is easier to provide relief on a local level,” Sawah said. “That is why it was important for us to begin establishing UOSSM Ukraine. We needed to help them begin building, because we know they will need long-term relief, even after the conflict ends.”

The HEST trainings conducted during this mission included one three-day course in Dnipro with 38 trainees, and another three-day training in Kharkiv with an additional 30 trainees.

“Both of these cities have been on the front lines and under attack causing many war injuries,” Sawah said. “The surgeons were very appreciative and felt they benefited greatly from our trainings.”

They recognized some additional needs as well, with one of the greatest being shelters for displaced families. But at the time, they also found that there is a need for not only severe war injuries, but simple clinical procedures as well.

“The assessment in April by UOSSM showed that local churches were already providing shelter for families and refugees,” Sawah said. “But we noticed one thing that wasn’t being provided, which were basic medical services. A local church had lent us one or two rooms for medical care.”

This clinical care is meant to support their already existing health care system during the war, particularly in areas that are being affected most.

“We have been providing health services in Ukraine,” Sawah said. “Mostly what you might think of are people coming in with chronic diseases, and those people may need medication, but don’t have access to their money or belongings. So, we are providing those medications, and we are able to do other small assessments with small medical equipment such as EKGs.”

Over the span of one month, from March to April, their clinic saw over 800 patients. But today, the needs are shifting. They officially closed the clinic in June — focusing now on other needs that have emerged as the war has changed.

“Being able to provide clinical care where we did was really important,” Sawah said. “Because their already-established systems have become completely overwhelmed by people who have been displaced and need treatment. We continue to assess the current needs as the war changes, so we closed some of these clinics that we were operating, but we are now looking into potentially opening mobile clinics and a mobile hospital to move with the Ukrainian people as they need, contingent on funding.”

Sawah shared that not only do the people of Ukraine need humanitarian support, trained surgeons and clinical support, but they also must consider the socio-psychological impacts that may extend for years beyond the end of this war.

“People initially may think of the visible impacts of war — like the physical injuries, for example,” Sawah said. “But many people don’t consider the invisible illness that war brings upon the mental health of these citizens. We must address not only the war itself, but the PTSD, depression and anxiety that will remain with the people after the war is over. Like we see in Syria, mental health will be a concern not only today or tomorrow — it may even be 10 years from today that they will require extensive mental health support.”

In addition to the trainings conducted in June, they also hosted a mental health workshop for the surgeons. Sawah explained that they are looking to provide even more mental health resources, like providing counselors and counseling sessions, to truly help make a positive impact on the lives in Ukraine for years to come.

Sawah received her Master of Science degree in pharmaceutical sciences in 1994 and her Doctor of Pharmacy in 1999, both from the UK College of Pharmacy. She attributes much of her success to the careful training and preparation she received here at UK.

“Going into clinical work after I graduated, I could instantly see how much UK provided me in terms of my education,” Sawah said. “I was able to assess situations at the same level as some pharmacists that had been working for a few years. So, UK really provided me a lot and I am very proud to be a UK grad. It truly is one of the best schools.”

Sawah said the training she received from UK to prepare her for effective clinical work, helped her to have a successful career in humanitarian work, a career that continues to serve as a fulfilling part of her life.

“This experience, being in Ukraine, was extremely emotional, and it was very much rewarding,” Sawah said. “Despite this kind of work being extremely tough and tiresome, I had experiences with civilians that pushed me to keep going every day. War is ugly, and I felt an obligation to help the Ukrainians just like I felt an obligation to help my family’s home country of Syria. And we will keep helping.”

For Sawah, it does not stop here. UOSSM will continue providing vital trainings in Ukraine including more advanced, structured trainings. They will provide Training of Trainers courses (ToTs) to advance the skills of Ukrainian surgeons to not only handle war zone injuries themselves, but also teach their colleagues to also do so. UOSSM USA will continue to support UOSSM Ukraine in primary care, surgical training and mental health from the United States, and hopefully through more medical missions in Ukraine.

“We want to help save lives. It was heartwarming to see people just come up to us and thank us for our support, especially after they knew where we came from and what we have been doing for over a decade in Syria,” Sawah said. “We hope to continue to have more impact in Ukraine, supporting civilians with medical and humanitarian relief, and doctors and health care professionals with vital training and support to help save those lives.”

In war-torn areas, even after the bombings have subsided, the extent of human suffering remains unimaginable. UOSSM USA is one of the only NGOs providing specialized surgical HEST training and mental health support in Ukraine, and continues supporting the crisis in Syria, all funded by donations and grants. Learn more at https://uossm.us.