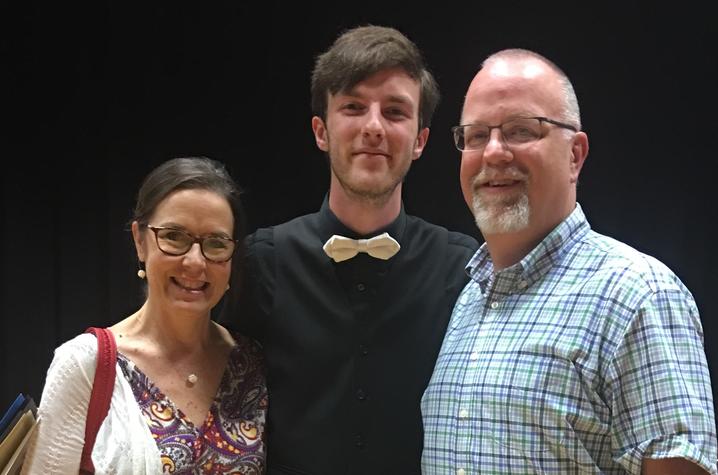 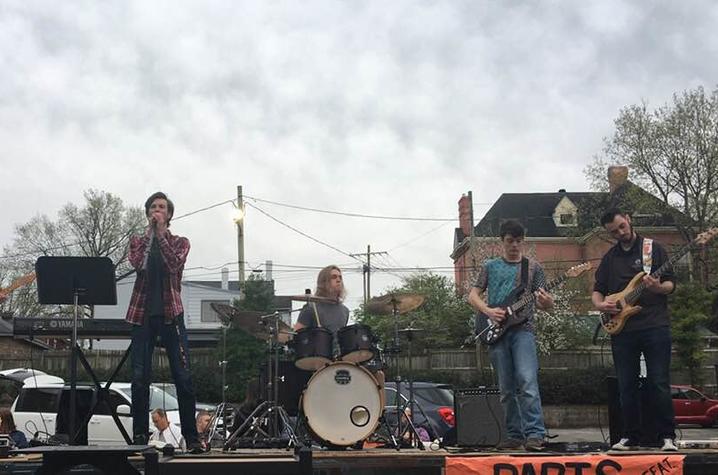 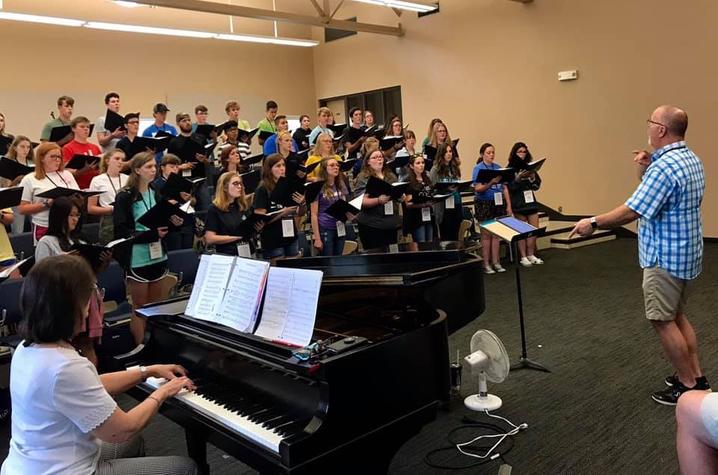 LEXINGTON, Ky. (Dec. 5, 2019) — When "Collage: A Holiday Spectacular" took the stage in 1999 for only its third year, it is highly unlikely that University of Kentucky choral conducting doctoral student Sue Ellen Ballard could foresee her own son, Jake, following in her or her husband's footsteps in the yuletide concert.

But that is exactly what will happen this weekend as the curtain rises on the 22nd anniversary "Collage" concerts Dec. 7-8, at Singletary Center for the Arts.

Sue Ellen was the first member of the Ballard family to experience the concert during the production's first years in the late 1990s. Before coming to UK, she earned her associate degree from Meridian Community College, a bachelor's degree in music education from University of Southern Mississippi and a master's degree with a choral emphasis from Mississippi College.

“Collage” became a part of her history during her graduate studies. “I began working with Dr. (Jefferson) Johnson and Dr. (Lori) Hetzel in 1999 as a doctoral graduate assistant. I had the privilege of accompanying Choristers and conducting Women’s Chorale. We prepared the choirs for ‘Collage.’”

Sue Ellen performed in “Collage” twice and returned at least once in the years since as an audience member.

“In 2011-12, I was a teaching assistant and assistant conductor of the UK Men’s Choir as I pursued additional studies in voice and conducting. I had the honor and pleasure of working with Dr. Johnson as he skillfully crafted a program which seamlessly integrated all of the choral ensembles with other performing groups within the department and from the community.

“I am still amazed at Jeff’s abilities in planning and executing an event of this scale and magnitude while remaining sensitive to the various traditions of the holiday season. He has been and continues to be a master programmer in that he selects repertoire challenging for the students and engaging to the community — not just at this celebration of the season, but in all of his concerts.”

Since appearing in the show years ago, Mickey has attended the concerts three more times — he even brought groups to watch from Central Baptist Church in Paris, Kentucky, where he serves as associate pastor of music and worship.

This year is Jake’s turn. He is a vocal performance freshman at UK. His parents brought him to see “Collage” once when he was younger, and now they will return to campus to see him in it. He will sing with the Men’s Chorus, Choristers and the acoUstiKats as part of this year’s program.

While the trio have their own individual memories of “Collage” for now, they all agree the UK holiday tradition is something special for many reasons.

“I love Christmas music,” Mickey said. “Combine my love for Christmas music with the extraordinary singing and playing one finds in the concert hall at this event, and it becomes not only an aesthetically pleasing experience but also an opportunity for me to kick off the holiday season.”

For Sue Ellen, Johnson’s seamless orchestration of the program is top-notch. “JJ Hollywood — Dr. Johnson’s nickname grad students gave him while we attended UK because he’s always on TV — is a master of programming. His ability to envision an entire evening of amazing literature is one of his most admirable qualities. Every concert we attend is interesting! He keeps your attention using the Singletary Center space creatively and without applause. The various vocal and instrumental ensembles are fascinating to watch and hear! The caliber of the performance is always perfect!”

And for Jake, it’s about the combination of talent on stage. “My favorite part about preparing for this year’s concert is singing with the other choirs. I am in both Men’s Chorus and Choristers, but this is the first time this semester that the two will perform together, along with the Women’s Choir. It’s an exciting prospect to combine so many voices toward one goal.”

For these three, music is the family business.

Not only does Mickey work with music at his church, he annually conducts the Kentucky Baptist Convention All-State Youth Choir and Orchestra (KBC ASYCO).

Before coming to UK, Jake was a leader in the marching band at Bourbon County High School, had lead roles in a number of musicals at school, sang and played as a member of the KBC ASYCO, sang in Kentucky Music Educators Association District and State Honor Choirs, and even sang under Jefferson Johnson as a member of the American Choral Directors Association National Honor Choir in Kansas City last year. Today, when he’s isn’t using his talents to represent UK, he is performing with the local garage band DeadLast.

In addition, an accomplished pianist, Sue Ellen serves as the accompanist at the church and occasionally lends her voice to the choir. The trio even make it a priority to perform together at least once a year for their church family.

And while music is part of the Ballard family daily routine, Jake’s turn in “Collage” this weekend is extra special for his parents.

“To see Jake blossom and flourish at UK after only one semester fills my soul with joy and warms my heart with gladness,” Mickey said. “Naturally, it’s different when your child is part of something that you once were. It’s also fun for me to relive memories as Jake shares moments that he is now experiencing for the first time. In fact, the other night we clapped together the ending of ‘Betelehemu’ (an annual selection for ‘Collage’).”

Sue Ellen agreed. “I’m not sure I can put into words what it means to have Jake not only attending our alma mater but majoring in vocal performance and having the opportunity to work with some of the finest musicians in the country. I cannot wait to see him perform with acoUstiKats — still can’t believe he was chosen to be a part of the ensemble as a freshman (that never occurs) — Choristers and Men’s Chorus. Personally, I am more excited to sit back, and watch Jake participate in ‘Collage’ then performing myself — I was way too nervous!”

“Collage” will be presented 2 p.m. and 7:30 p.m. Saturday, Dec. 7, and 3 p.m. Sunday, Dec. 8, at the Singletary Center Concert Hall. Tickets for "Collage" are $30 for general admission and $15 for students and children plus processing fees. A limited number of tickets are available for the Saturday performances through the Singletary Center ticket office by phone at 869-257-4929, online at www.scfatickets.com, or in person at the venue.

UK Choirs is part of the School of Music in the UK College of Fine Arts. The school, currently celebrating 101 years of excellence, has garnered a national reputation for high-caliber education in opera, choral and instrumental music performance, as well as music education, music therapy, composition, and theory and music history.