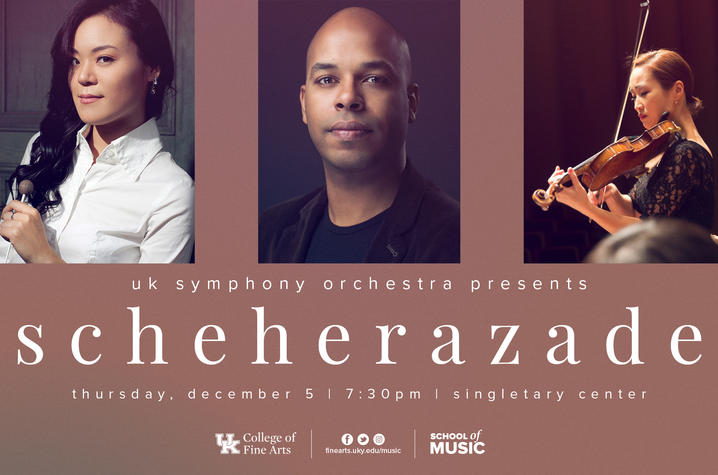 LEXINGTON, Ky. (Dec. 3, 2019) —​ Join University of Kentucky Symphony Orchestra (UKSO) for a performance of "Scheherazade," Nikolai​ Rimsky-Korsakov’s sparkling tone poem, a musical retelling of the ancient stories of "The Arabian Nights." The concert, which will also include a regional premiere of work by Brazilian composer André Mehmari, as well as music by composer Lili Boulanger, will begin 7:30 p.m. Thursday, Dec. 5, at the Singletary Center for the Arts Concert Hall.

The program, which opens with a performance of Mexican composer Silvestre Revueltas’ powerful 1938 work, "Sensemayá," will feature Maestro John Nardolillo conducting Rimsky-Korsakov's work with its celebrated violin solos depicting the princess Scheherazade played by UKSO concertmaster Ella Chang, a doctoral candidate in conducting from Seoul, Korea. Brazilian composer André Mehmari will be present for the Kentucky premiere of "The Royal and Imaginary Dance Suite," conducted by UKSO’s assistant conductor and João Rocha, a doctoral candidate from Brazil. Mehmari's piece was commissioned by the São Paulo State Symphony Orchestra for the second International Conducting Competition in 2006. The orchestra will also play Lili Boulanger’s impressionistic work “Of a Spring Morning,” led by assistant conductor Sey Ahn, a doctoral candidate from Seoul.