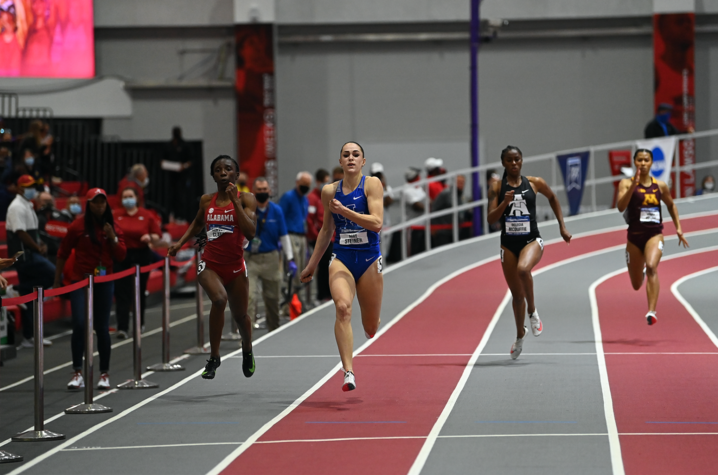 Running in lane five of the banked oval in the Randal Tyson Center, Steiner got a great start from the blocks. She had to battle University of Alabama’s Tamara Clark the entire way, but — as she has done in all seven races this season — held on to strike gold. Her time of 22.38 seconds:

“Abby had to go get it tonight,” Coach Lonnie Greene said. “Abby is very talented but she got a great challenge from Tamara Clark and had to earn it.

“Abby did exactly what Coach Hall (UK sprints coach Tim Hall) instructed her and executed it. There is a connection that she and Coach Hall have. They work hand-in-hand and she believes in his vison. The best is yet to come for her, I’m excited.”

“Coach Hall told me to be aggressive from the start, never letting off the gas, never getting caught,” Steiner said. “We executed the same way we have all season, and had to because I had amazing competition to pull me along.”

“It’s amazing, it hasn’t sunk in yet,” Steiner said of the win. “Way back in the fall, Coach Hall and I started talking about this title and the record when training began. Tonight we talked about ‘Isn’t it amazing that we are here?’ He believed in me from the beginning and that’s how it played out.”

Also shining was the UK men’s 4x400 relay, which turned in a school-record performance, and only the nation’s best time of the year by North Carolina A&T prevented the Wildcats from bringing home gold. The unit of Jacob Smith, Lance Lang, Kennedy Lightner and Dwight St. Hillaire zipped the course in 3:03.61 en route to the second-place finish. Lang had the best leg with a blazing run of 44.94 seconds.

St. Hillaire got Saturday afternoon started with a 45.89 time in the 400m dash, improving his mark by .08 from Friday. He finished eighth in the event to get a point for the Wildcats. Lang followed with a sixth-place showing in the 200m final, timing at 20.88 seconds.

As a team, the Kentucky women finished in 13th place with 17 total points while the men tied for 14th with 12 points. For the Wildcat men, it was the best team finish in a quarter-century, since the Cats were seventh place with 22 points in 1996.

The meet began Thursday and UK hit the scoreboard when Annika Williams posted a personal best 4173 points to finish sixth in the women’s pentathlon. Preliminaries in the individual running events were held Friday, with St. Hillaire, Lang and Steiner advancing.

Four UK men earned six All-America notices, all of them first team. Lang, St. Hillaire, Jacob Smith and Kennedy Lightner were honored for the 4x400-meter relay team that earned the silver medal with a school-record 3:03.61 time. Lang and St. Hillaire also were recognized for the 200- and 400-meter dashes, respectively.

Six Wildcat women combined to garner 11 honors, six of them first-team All-America and five on the second team.

Steiner led the way with three places, twice on the first-team for her gold medal performance in the 200-meter dash and for the 4x400 relay. She also was second team for the 60m dash. The highlight, of course, was the 22.38-second time in the 200m. Steiner is now an eight-time All-American for indoor track, receiving three of those honors last season and two as a freshman.

Dajour Miles received first team for the 4x400 relay and second team for 200m. She had one All-America award a year ago.

Megan Moss also is a two-time All-American this year, first team for the relay and second team for the 400-meter dash. She now has four All-America awards, including two from last year.

Masai Russell picked up first-team All-America for the relay and second team for the 60m hurdles. She has four indoor All-America honors, including one from 2020 and one from 2019.