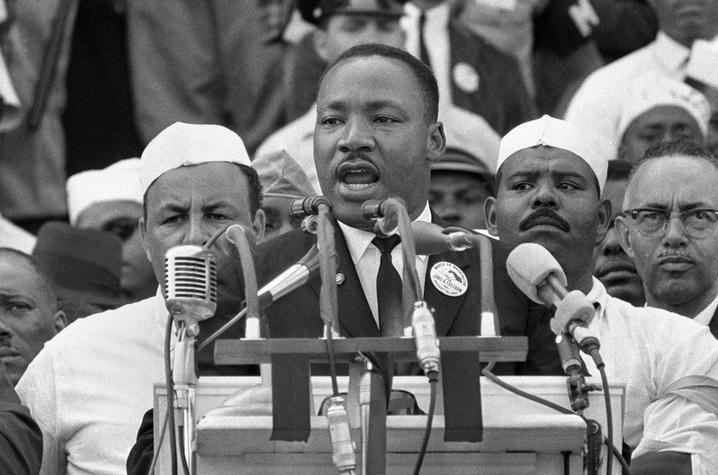 LEXINGTON, Ky. (Jan. 17, 2020) — The world lost civil rights icon Martin Luther King Jr. more than five decades ago; two full generations have no living memory of him. Those who were schoolchildren when King marched the streets of America and delivered his “I Have a Dream” speech in 1963 are retired now. Yet this gentle man, who forced many to look hard at their beliefs and prejudices, made such an impact on the world and America’s future that even the grandchildren of the generation that actually walked with Rev. King recognize his face. Today’s children know what King stood for then and still represents today.

A child of the Deep South, born as the Great Depression swept the world into poverty and deprivation, King grew to become the world’s most energetic spokesperson and recognizable leader of the fledgling Civil Rights Movement. From the Montgomery bus boycott in 1955, to his March on Washington in 1963, until his assassination in 1968, King’s major weapons against racism and poverty, ignorance and violence were his eloquent words of unity and his earnest prayers for peace, encapsulated in his world-renowned “I Have a Dream” speech.

“In celebrating the life of Martin Luther King Jr., we’re celebrating the ideal that is represented by his life. It still reminds us that we can do better,” said Chester Grundy, retired University of Kentucky administrator and co-chair of the MLK Holiday Planning Committee,

“Dr. King’s movement for nonviolent resistance was informed by a moral vision of peace, justice, and inclusion,” Coates said. “The fight for economic justice is the unfinished work of Dr. King and is just as relevant today as it was 52 years ago.

“We still struggle to develop a sustainable economy that works for the masses of the American people, and the best way to remember him is to build broad-based support from robust policies that would end involuntary unemployment; provide universal, single-payer health care; protect the environment; abolish student loan debt; promote racial cooperation; and prevent senseless war.”

Co-sponsored by the University of Kentucky, the Lexington-Fayette County Urban County Government and other community sponsors, the King Holiday Celebration begins with the Freedom March at 10 a.m. Monday. Participants in the march will begin lining up at 9 a.m. inside the corridor of downtown Lexington Convention Center's Heritage Hall on West Main Street.

Freedom March coordinator and University of Kentucky Associate Vice President for Institutional Equity Terry Allen said, “We’ve taken a lot of steps forward, but we’ve still got a lot of steps to take. I’m encouraged by the folks that are involved with the program, that attend the program, and attend the march; we’re all taking these steps together. This celebration is a symbol of unity. It’s a symbol of hope.”

At 11 a.m., marchers and others will gather in Heritage Hall for the commemorative program featuring Rev. Coates. Singer/composer Donnie will end the program in the tradition of his cousin, Marvin Gaye, with his politically oriented, consciousness-raising version of modern soul music.

Coates has served as senior pastor of Maryland’s Mt. Ennon Baptist Church for 16 years, creating and reinforcing his church’s progressive positions on media advocacy, social justice and health care reform. A nationally recognized human rights leader, Coates is the president of Black Church Center for Justice and Equality, a national policy board dedicated to supporting clergy, congregations and communities in building sustainable, justice-minded ministries. He founded the New Abolitionism Campaign, an economic justice initiative to solve some of America’s greatest social and economic challenges around issues of financial solvency and wealth-building.

He is a board member of the Parents Television Council and the National Action Network, and a member of the Society of Biblical Literature, the Morehouse College Board of Preachers and the NAACP. In 2012, The Root named Coates one of their 100 African American Achievers and Influencers. The American Civil Liberties Union honored him in 2013 for his commitment to advancing civil rights and liberties for all. In the same year, Ebony magazine selected him as one of their Power 100.