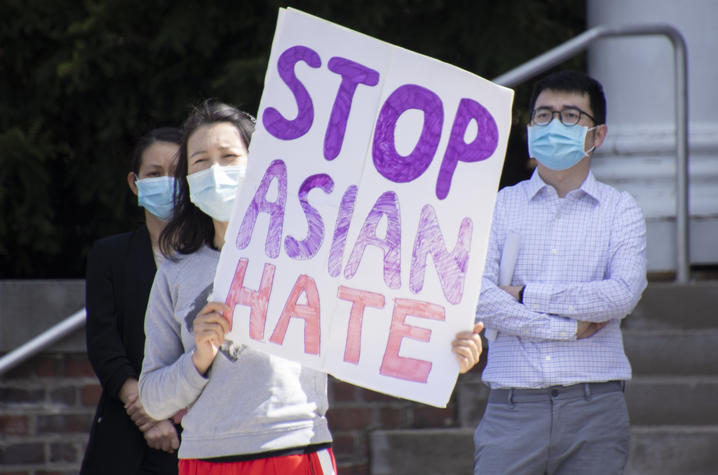 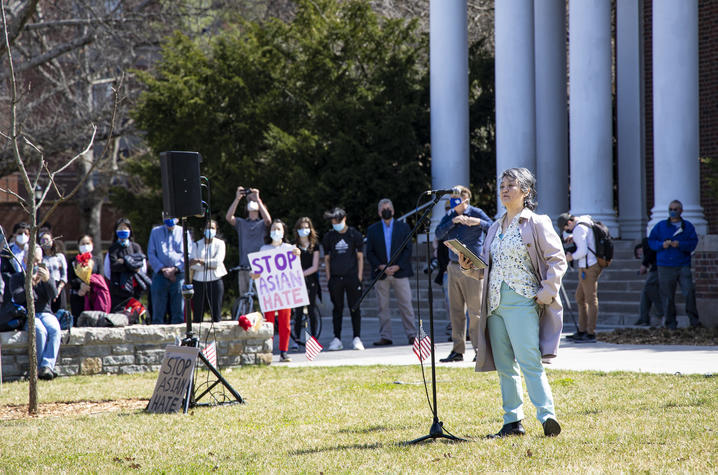 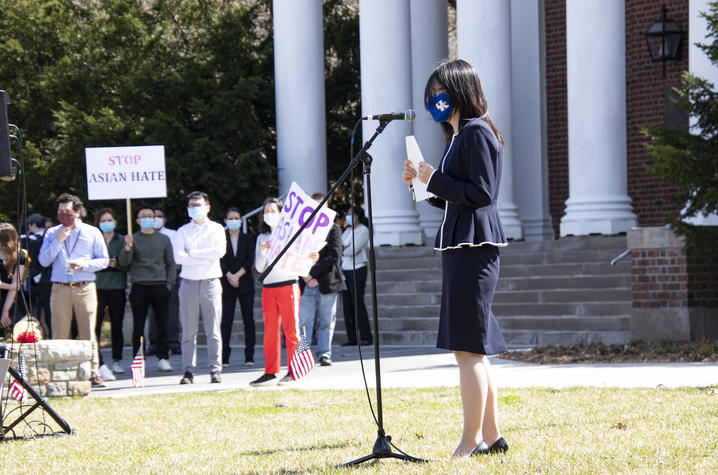 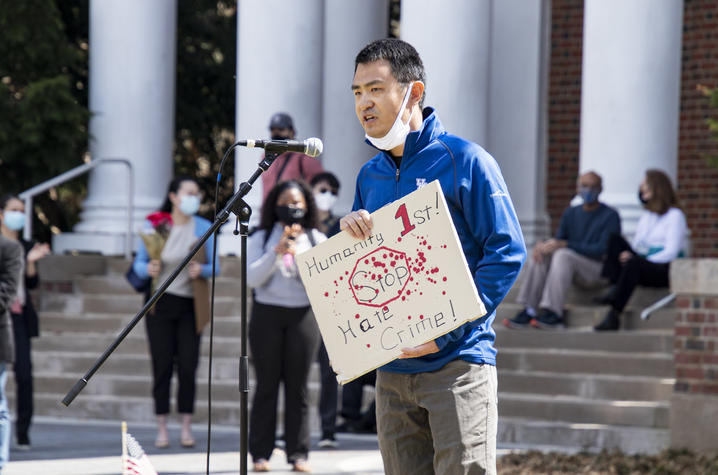 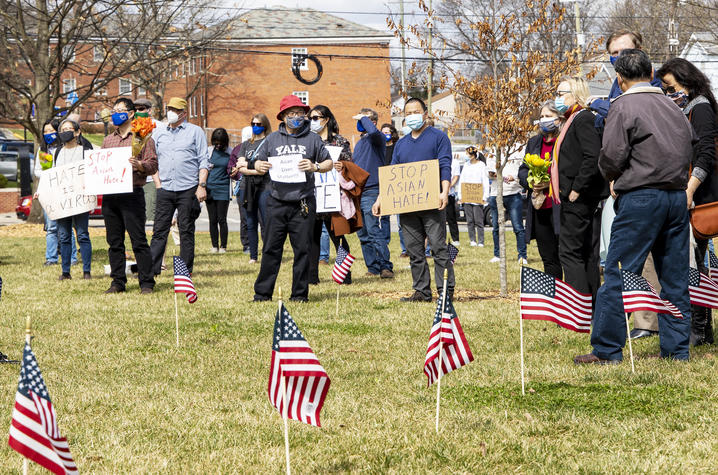 LEXINGTON, Ky. (March 31, 2021) — In a strong show of support for the Asian community, hundreds of people attended a rally on the University of Kentucky campus last week to denounce the mass killing of Asian Americans in Atlanta as well as the overall discrimination against Asians and Asian Americans in the U.S.

The crowd of nearly 400 gathered in front of Memorial Hall March 24, many carrying signs, and all supporting a call for change. Second generation Asian American Donna Kwon, associate professor of ethnomusicology in the UK College of Fine Arts, performed beautiful Korean singing and led a chant of the Atlanta victims’ names.

One of the rally organizers, Associate Professor Ying (Tracy) Lu, in the Department of Retailing and Tourism Management in the College of Agriculture, Food and Environment, was uplifted by the support.

“I saw humanity when I saw this scale of the turnout. The supporters were diverse, including people with different colors, backgrounds, minority groups and kids of UK employees,” Lu said. “We are glad to see the support from UK campus and the unity of Asian and Asian Americans. Asians and Asian Americans shall be treated equal as citizens. I hope that day could come earlier before my kids grow up, so I could tell my kids that your parents together with so many honest people with humanity have spoken for you and fight for you, which is also part of American history.”

Among the speakers at the rally was Haoying Sun, Warren W. Rosenthal Associate Professor in the Department of Marketing and Supply Chain Management in the Gatton College of Business and Economics. She said the Asian American community becomes the scapegoat for American society’s problems, being accused of bringing viruses to the U.S., stealing jobs and spying for the Chinese government.

Professor Keiko Tanaka, in the Department of Community and Leadership Development in the College of Agriculture, Food and Environment and co-chair of the UK Asian and Asian American Affinity Group, told the group she is from Japan but has spent 35 years in the U.S. and considers herself a first generation Asian American immigrant. She said the Atlanta shooting “was like a punch to my gut.”

“It broke a dam of years of my frustrations, disappointments, sorrows and angers that have been building inside of me — of what it means to be an Asian American in this country,” she said. “We, Asians and Asian Americans, are not a homogeneous group who fits in one set of stereotypes as so called ‘model minority’ or ‘math/science wiz.’ Let us stop this ‘model minority’ as an excuse to treat Asian Americans as a convenient minority. On the one hand, we are not categorized as an underrepresented minority group by the number/ratio, and therefore being disregarded from our contributions to enriching American sociocultural fabrics. On the other hand, we are part of the community of the people of color who endure constant prejudices, racism, mistreatments and hate crimes.”

Tanaka further urged the community not to turn anger, frustrations, sorrows and pains into hate.

“Let us not reduce ourselves to the same level as white terrorists. Instead, let us build a coalition wide and deep. Let us build alliances that can amass energy and creativity based on respect and love for one another. Let us create a culture that does not tolerate racism and hate any longer.”

Representing the student perspective, Yan Xia, an MBA student and father of two young children spoke to the rally goers, “I told my kids last night that Dad will be their superhero because I’ll be standing here and speaking out for them. When our kids go to school, they should not be discriminated because of their hair color, their gender, or laughed at for their accent of English, or felt embarrassed for the lunch prepared by their Asian mom. It is not fair. We are not foreigners. We are citizens although we are never treated as equal.”

“The Asian and Asian American members of our community are valued, integral parts of the UK family. They are part of the rich tapestry that makes us who we are,” Blackwell told the crowd. “We also recognize that we must back our words with actions. That’s why our university is engaging in comprehensive efforts to enhance the diversity, equity and inclusion of our campus community. It’s important work, at a crucially important time.”

Other powerful speeches and a strong show of support came from Sue Roberts, associate provost for internationalization; Huajing Maske, director of the Office of China Initiatives; Kyra Hunting, director of diversity and inclusion in the College of Communication and Information; Rudy Buchheit, dean of the College of Engineering; and other department heads from the university.

Lu said the presence and support of these administrators is appreciated.

“We look forward to working with the university administration to make the UK community a safe and proud place for UK Asian and Asian American employees, students, friends and affiliates,” she said.

Other supporters who are speaking out against anti-Asian crimes and discrimination include Mark Swanson, associate professor in the Department of Health, Behavior and Society in the UK College of Public Health and a former Third District Lexington-Fayette Urban County Council member.

“The tragedy in Atlanta is only the manifestation of the deep, underlying problem of racism faced by our Asian colleagues and friends on a regular basis,” he said. “I think it’s really important to realize that Asian Americans aren’t the cause of this hate and discrimination — White Americans are. And Asian Americans can’t solve the problem — but White Americans have to be, and can be, the solution to racism in all its forms.”

Nancy E. Schoenberg, Marion Pearsall Professor of Behavioral Science in the College of Medicine and director of the Center for Health Equity Transformation, said the horrific attack in Atlanta sends yet another bell of alarm in a nation already besieged and undermined by division and hate.

“The Center for Health Equity Transformation is united with all people and is committed to calling out and working to rectify hatred, misogyny, racism and xenophobia,” she said. “We grieve the loss, suffering and anxiety of the Asian community impacted by this violent, xenophobic and racist attack. We call on each of us to speak out against this and every other act of bias and violence, to seek and secure justice, and to work to end all forms of structural and personal racism. Our lives and our nation depend on it.”