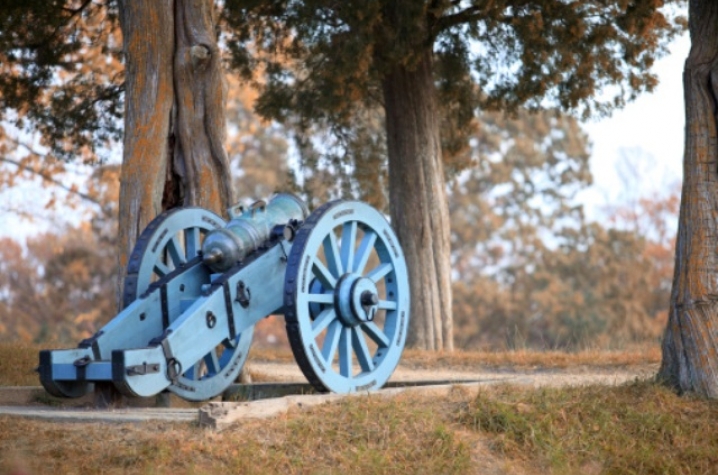 LEXINGTON, Ky. (May 15, 2012) — Archaeologists at the University of Kentucky have broken ground on a new project, uncovering historical evidence from a Revolutionary War siege, right in the heart of the state.

UK archaeologists Nancy O’Malley of the William S. Webb Museum of Anthropology and Philip Mink of the Kentucky Archaeological Survey, are undertaking a geophysical survey and limited excavations at the site of Fort Boonesborough on the Kentucky River in May. The study aims to find archaeological evidence relating to the Siege of 1778, a prolonged engagement that pitted a large party of French Canadians and Indians against settlers living in the stockaded fort.

The project was made possible through a grant from the American Battlefields Protection Program and the cooperation of the Kentucky Department of Parks.

"I’m very grateful to the American Battlefields Protection Program and the Kentucky Department of Parks for making this project possible," O'Malley said. "The project builds on previous research and promises to gather additional information about this very significant site and the events that took place there during the Revolutionary War."

The site of Fort Boonesborough, among the most important Revolutionary War sites in Kentucky, is located in present-day Fort Boonesborough State Park in Madison County. It is listed on the National Register of Historic Places and is a National Landmark site. The site location was confirmed using archaeological and archival evidence by O’Malley in 1987, and the current project marks a return to the site to gather more information about the fort plan and to investigate key features associated with the siege.

Among the features of interest are the Lick Spring, which was an important source of water during the conflict; the Indian camp, where some 400 Indians stayed during the siege; the fort itself, which offered protection to the settlers living there; the treaty area; and a tunnel that was dug by the Indians from the Kentucky River to the fort. The tunnel, which they dug to breach  the fort’s defense from below, collapsed before it was completed.

The archaeologists are using geophysical equipment to non-invasively survey large areas for soil anomalies. These anomalies may mark areas where siege-related or other cultural activity took place. This methodology marks one of the most significant recent methodological improvements in archaeology,  which has greatly enhanced archaeologists' ability to quickly and cost-effectively identify areas of former cultural activity.

"Geophysical surveying has so many useful applications in many fields," O'Malley said. "For archaeology, these techniques allow us make more informed decisions about the placement of archaeological excavation units with a greater chance of discovering scientifically and culturally significant deposits. The methodology has proven its worth over and over again at many different sites."

The results of the survey will be presented in a technical report prepared for the American Battlefields Protection Program. Information and artifacts will be incorporated into the exhibits at the Fort Museum housed at the fort replica on U.S. Highway 627.

The project will also gather information that will be helpful to the Department of Parks in their stewardship and protection of this highly significant site.

The general public is invited to visit the park during the archaeological investigations; volunteer opportunities will be made available for the excavation phase.

O'Malley said she was excited about the opportunity for UK to once again partner with the Department of Parks.

"Many of Kentucky’s State Parks contain significant cultural sites whose study contributes greatly to our knowledge of Kentucky’s cultural heritage," O'Malley said. "Partnerships between the university and agencies such as Parks with financial support from programs like the American Battlefields Protection Program, are ideal conditions for fruitful, informative research that has far reaching effects in terms of public education, knowledge about our past and stewardship of Kentucky’s archaeological record."