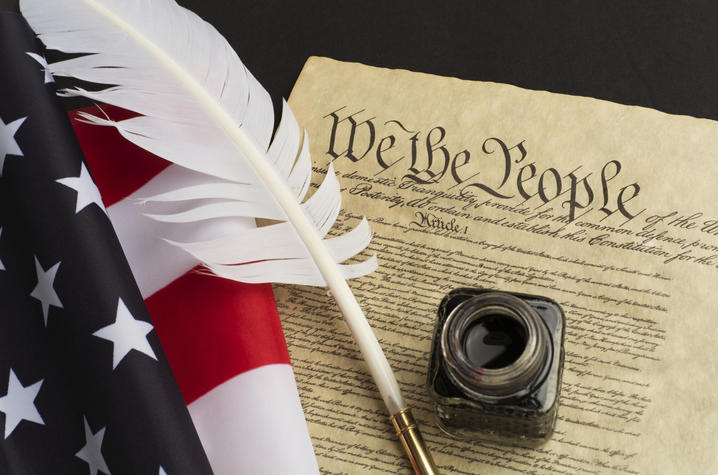 LEXINGTON, Ky. (Sept. 17, 2020) — You may not see parades or firework displays today, but Sept. 17 is an important day in the history of the United States of America.  It’s Constitution Day — a recognition of our nation’s founders signing America’s most influential governmental document on Sept. 17, 1787.  This is considered the 233rd birthday of our U.S. government.

The document, radical for its time, established the three main branches of government — legislative, executive and judicial branches with their checks and balances; divided power between the federal government and the individual states; and created many protections of personal freedoms for U.S. citizens.The Constitution was signed by 39 founding fathers in the Assembly Room of what is now known as Independence Hall in Philadelphia, Pennsylvania. It was the culmination of work during the Constitutional Convention that began May 25 and ended less than four months later with the document signing on Sept. 17.

"We celebrate Constitution Day not only to commemorate the ratification of the Constitution, but to remind us that through it all — through a civil war, racism and discrimination, economic crises, and pandemics — the greatest threat to our nation is ignorance and passivity. Every responsible citizen should take this day to reflect on how far we have come and to reflect upon the challenges ahead," said Clayton Thyne, chair of the University of Kentucky Department of Political Science in the College of Arts and Sciences.

For many years in the 20th century, Sept. 17 had been observed as Citizenship Day and was created to recognize all citizens who were born in the U.S. or who gained citizenship through naturalization. In 2004, by act of law, Congress changed the designation to Constitution and Citizenship Day to recognize the landmark document and its important place in U.S. history.  Also, the law required educational institutions receiving federal funds to commemorate the day.

"While the Constitution remains the foremost pillar holding our nation together, it is not something to be taken for granted," Thyne said. "Strong democracies and empires have perished throughout history, and our standing in the world is no different. We must not only learn about and appreciate the Constitution, but also think critically as we face new crises and policies that will shape our future. As a university, we must not lose sight of this great document that shaped our nation.  However, we must also be ready and eager to fight within its constructs to assure a more perfect union for ourselves and those who will come later."

Katherine McCormick, senior provost faculty fellow and professor in the UK College of Education also notes, "With Election Day only weeks away, we are reminded of the importance of the Constitution and of our responsibilities as citizens. Vote, protest, write your congressional representative, connect with your community; let your voice be heard. We are better when we are engaged. We can celebrate that."

The UK Appalachian Law Caucus is hosting a talk by Kentucky Rep. Chris Harris at noon today in the Rosenberg College of Law Room 297, with all Centers for Disease Control and UK safety guidelines enforced. Since 2015 Harris has represented the 93rd District of the Kentucky House of Representatives, which includes Martin County and part of Pike County. He earned his accounting degree from UK and his law degree from Northern Kentucky University. For more information visit https://calendar.uky.edu/event/rep_chris_harris#.X2JjFmhKg2w.

The National Constitution Center is celebrating Constitution Day with several online events that can be accessed at https://constitutioncenter.org/learn/civic-calendar/constitution-day-civic-holiday.