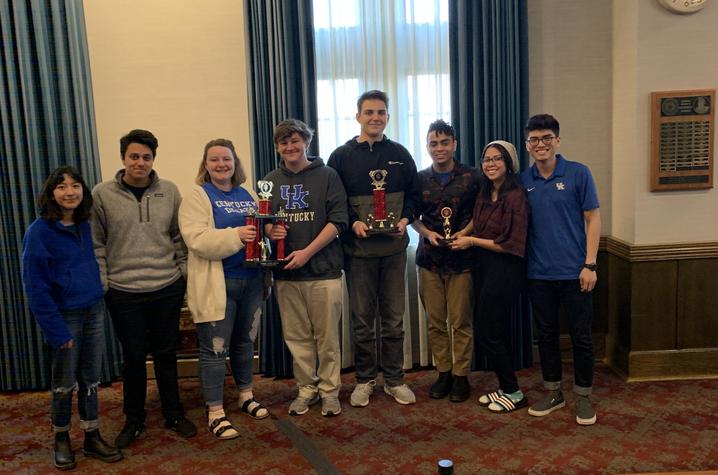 LEXINGTON, Ky. (Feb. 5, 2020) — The University of Kentucky Intercollegiate Debate Team is already off to a strong second semester of their 2019-2020 season by winning the three-day Hoosier Invitational, hosted by the University of Indiana.

Winning the annual tournament is not a rare accomplishment for UK, the defending National Debate Tournament champions. What is rare, however, is how it was accomplished and with whom.

The Hoosier Invitational annually features many of the top debate programs in the country. At the end of the tournament, it was the two Kentucky teams left standing in the final round, in which case the tournament declared co-champions. That is rare. Even more rare considering three of the four UK finalists were freshmen.

“The team was very prepared and did a great job executing in the debates. For a young squad this was a big step as we try and find our identity,” said David Arnett, director of debate

The team of Genevieve Hackman (senior) and Christopher Eckert (freshman) were 7-0 and the top seed with impressive wins over Berkeley, Michigan and Minnesota. The all-freshman team of Alan Ivackovic and Christopher Lucas were 6-1 and the second seed after preliminary rounds with some great wins over Dartmouth and Michigan State.

In the final four round, Hackman and Eckert defeated Dartmouth on a 3-0 decision. Ivackovic and Lucas won a tough 2-1 against a very strong Michigan team.

The UK team is now preparing for tournaments at the Naval Academy and the University of Texas-Austin as they continue to defend their national champion title.