LEXINGTON, Ky. (April 30, 2018) — It was never a question where Bill Gatton would go to college. His fate was sealed before he was born.

“It was expected that I would attend the University of Kentucky,” the businessman and philanthropist said recently. “My father planned for all his children to go to college, and I was the third son and the fourth child.”

Born on a family farm in Bremen, Kentucky, in Muhlenberg County, Gatton’s educational destiny may have been set, but that didn’t mean he didn’t have to work for it.

He made and saved money, selling watermelons along the side of the road, so he could afford UK. At UK, he joined the ROTC, left school to become an officer in the Army, and returned to the university — finishing his education in four years.

“UK provided me with a great education to have a purpose-driven life,” Gatton said. “UK gave me the foundation to be successful.”

This morning, flanked by President Eli Capilouto, UK Board Chair Britt Brockman, and student leaders, Gatton heard the announcement that the Board of Trustees is considering a resolution to name the new Student Center in his honor.

The naming of the Bill Gatton Student Center, if approved Tuesday by the board, is, in part, a response to the foundational $20 million gift Gatton made toward the construction of the 378,000-square-foot facility in 2014.

The gift made the $200 million project possible. But it also is saving students millions of dollars. Typically, a project of this scope would be paid for by levying a separate facility fee that would be borne by students.

Because of Gatton’s gift, however, no such fee was created. Today’s students — and those yet to come — will save an average of $50 per student, per year, in perpetuity, because UK did not have to create a separate facility fee.

Officially opening this morning, the state-of-the-art facility contains new, sparkling retail and residential dining, a two-story Barnes & Noble bookstore, high-tech office and meeting space for student organizations and staff from across the campus, and living and learning spaces that promise to make the facility what Capilouto often calls the “living room of the campus.”

However, Gatton’s gifts to the University — and his decades of support for UK — extend far beyond this latest financial gift.

In 1995, his $14 million contribution laid the foundation for the construction of the Gatton College of Business and Economics. Years later, the building was renovated and expanded further, funded through $65 million in private gifts — the first academic building in the state to be completely supported by philanthropy.

Gatton — who made his fortune in businesses as diverse as real estate, banking, auto sales and investing — is the university’s largest philanthropic supporter, giving nearly $60 million to UK. And his philanthropy extends far beyond UK, to causes such as the YMCA of Central Kentucky to the needs of teachers in East Tennessee, where he currently lives.

“There’s so many worthy organizations that have been the beneficiaries of his goodness,” Capilouto said. “He’s one of the more special people I’ve met in my lifetime.”

But UK is where his heart is, and it’s been the focus of his giving and attention, having served as a trustee for the state’s flagship, land-grant institution as well.

The reason is simple. He steadfastly believes in the university’s mission.

“The University of Kentucky is extremely important to the Commonwealth’s future,” Gatton said. “There is no other institution or entity better equipped to address the state’s needs, and provide transformational education, leadership and service. UK is the bright hope of Kentucky.”

Even more remarkable about Gatton’s gifts to UK is the enduring nature of them, serving as the catalyst for other donations and having an impact on students for decades to come, most of whom he will never meet.

“His impact will be felt by generations of students, who will meet lifelong friends, establish life-altering connections, and find their passions and direction in this place,” said Britt Brockman, chair of UK’s Board of Trustees. “They will be able to look back at this place and this university and, like Mr. Gatton, describe it as their ‘foundation to be successful.’

He believes in the students who make the University of Kentucky what it is and what it has the promise to be.” 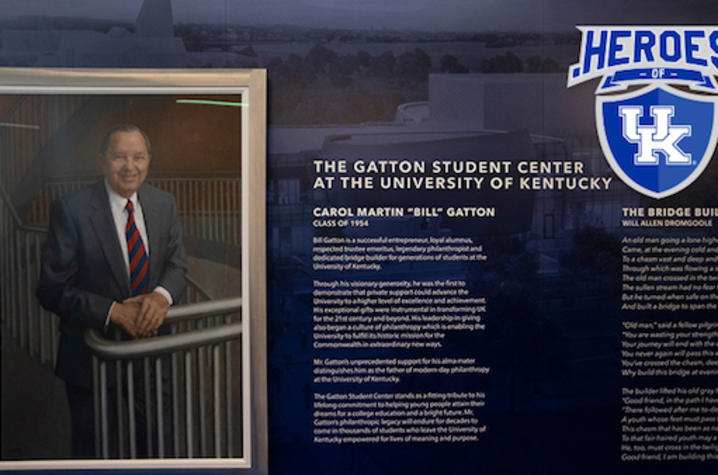 UK Board of Trustees will consider naming new UK Student Center for Bill Gatton at its Tuesday meeting.