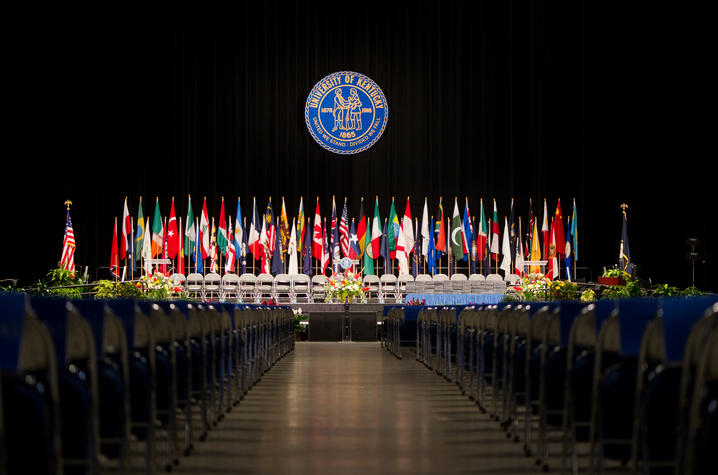 LEXINGTON, Ky. (Feb. 19, 2016) — Leaders in the areas of astrophysics; military and the law; food chemistry; and service to victims of sexual violence have been selected to receive honorary doctorates from the University of Kentucky at its Commencement ceremonies in May.

An honorary degree pays tribute to those whose lives and work exemplify professional, intellectual, or artistic achievement and who have made significant contributions to society, the state and the University of Kentucky.

W. David Arnett, who will receive an Honorary Doctor of Science. One of the world's preeminent astrophysicists, Arnett grew up in Ballard County and began his college academic career as a physics major at UK. He went on to earn his doctorate at Yale University and later held academic positions at Rice University, the University of Texas, the University of Illinois and the University of Chicago. He currently is Regents Professor at Steward Observatory at the University of Arizona where he continues to conduct research to bring further clarity to understanding the universe.

Highly honored for his work in astrophysics — an area in which he has published more than 400 papers and a renowned scientific book — Arnett also has a physical law named for him. Arnett's Law describes how stars regulate energy transport as they explode.

Thomas Patterson "Patt" Maney, who will receive an Honorary Doctor of Laws. Maney has attained the highest levels of recognition in two fields — the military and the law. He earned his undergraduate degree from UK and his law degree from the University of Louisville, and he received his military commission from the UK Army ROTC program. Maney served in the military for 34 years reaching the rank of general, and he served in various hot spots around the world, including Panama, Haiti, Bosnia and Afghanistan. He also served as deputy commander of the Army Civil Affairs and Psychological Operations Command and deputy commander of the Special Warfare Center and School at Fort Bragg. Maney was severely injured in Afghanistan when an improvised explosive device blew up a vehicle in which he was riding. After 20 months of rehabilitation, he retired from the Army in 2007.

Maney's law career has included private practice in Louisville and later in Fort Walton Beach, Florida, where he was elected a judge in Okaloosa County Court in 1989 and continues in that position today. His work and focus on improving the lives of American veterans led to the Florida legislature's passage of the T. "Patt" Maney Veterans Treatment Intervention Act.

Herbert W. Ockerman, who will receive an Honorary Doctor of Science. A world-renowned professor of animal science and researcher in the areas of food chemistry and meat science, Ockerman has served his entire faculty career at The Ohio State University where he continues to work full time. He was the first to produce germ-free muscle tissue in a natural state, which led to canning food without a heat treatment. In addition to his contributions to food science, Ockerman has made an impact on the many students he has taught and mentored over the years including students who went on to become national secretaries of agriculture, deans of colleges of agriculture, university presidents, owners of food companies and directors of food research institutes.

His teaching and research is rivaled only by his philanthropy. Long ago, he established the tradition of collecting books and donating them to school and university libraries around the world. That tradition became the Frances J. Ockerman International Book Endowment, named for his late wife. He also created a separate endowment at UK in memory of Frances.

Eileen Recktenwald, who will receive an Honorary Doctor of Humane Letters. Recktenwald has made helping victims of sexual assault her life's work. Her career with domestic violence victims began in 1985 as director of the Big Sandy Family Abuse Center in Prestonsburg, Kentucky, and eventually led to her current position as executive director of the Kentucky Association of Sexual Assault Programs that oversees 13 Kentucky Rape Crisis Centers throughout the state. She is recognized as a national leader in victim services and has helped Kentucky become nationally prominent in the field of sexual violence prevention. Recktenwald helped UK researchers obtain a federal grant to conduct the first study of its kind that proved the effectiveness of the Green Dot bystander intervention program in high school populations. She continues her work to increase the nunmber of schools using the program.

Recktenwald earned her undergraduate degree in 1973 from the University of Maryland and later became one of the first graduates of the UK College of Social Work's satellite programs in the master of social work education in Eastern Kentucky. She has received numerous national and state awards for her work.

The University of Kentucky Commencement ceremonies will take place May 8.