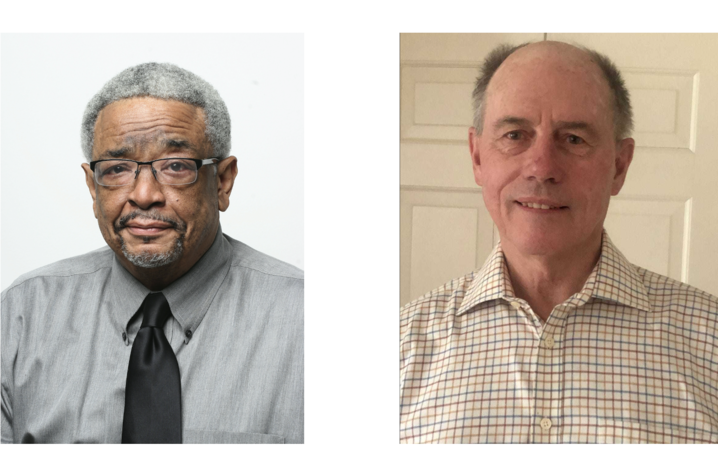 LEXINGTON, Ky. (Nov. 16, 2021) — The 2021 James Madison Award from the University of Kentucky is going to Bennie Ivory and Stan Macdonald, both retired from the Louisville Courier-Journal, where their work provided high-quality journalism in Kentucky for 44 years, especially in numerous efforts to protect and expand First Amendment rights, including the transparency of public agencies in the state.

Bennie Ivory was executive editor of the Courier-Journal from 1997 until 2013, and “excelled at encouraging and supporting aggressive investigative reporting at all levels,” First Amendment lawyer Jon Fleischaker, a previous James Madison Award winner who nominated both men, who worked closely with Ivory as the newspaper’s First Amendment attorney. “That effort was done in many ways, including resisting attempts by many to impinge on First Amendment rights and to uphold the public’s right to full transparency of public agencies. Bennie was totally supportive of efforts to enforce and expand the public’s right to full transparency of public agencies. Perhaps the best example of that is that in a time of real pressure to cut expenditures, he ensured that the effort to open records relating to the many failures of the Cabinet for Health and Family Services in dealing with child abuse was pursued to an extraordinarily successful conclusion.”

Fleischaker also cited Ivory’s decision to publish the details of a lawsuit relating to clergy sexual misconduct against the Catholic Church in Lexington when other news media would not.

Stan Macdonald began reporting for the Courier-Journal in 1969 and was city editor and special projects editor, retiring in 2013. He served as either lead reporter or primary editor for important series on topics such as law enforcement’s inadequate and inappropriate response to domestic abuse, inappropriate use of force by Louisville police, unequal treatment for female high school athletes that violated federal law, lack of enforcement by Kentucky authorities for serious coal-mining violations and voting irregularities in Eastern Kentucky, which was runner-up for a Pulitzer Prize.

Macdonald also helped draft “substantial amendments to the Open Records Law and Open Meetings Law, recommendations which were implemented,” wrote Fleischaker. “During this entire period there were many outstanding journalists at the Courier-Journal, some of whom have been honored with this award. None is more deserving than Stan.”

“Bennie and Stan always evidenced a deep commitment to the public's right to know and made it a driving force of their careers,” said UK Journalism Professor Al Cross, who was the C-J’s political reporter.

The James Madison Award is scheduled to be presented at the Scripps Howard State of the First Amendment Address, to be delivered by news-media attorneys Tom Miller and Elizabeth Woodford, beginning 5 p.m. Wednesday, Nov. 17, via Zoom. Details of the event are posted at https://ci.uky.edu/jam/state-first-amendment-address.

The James Madison Award is presented annually by the Scripps Howard First Amendment Center of the School of Journalism and Media in UK’s College of Communication and Information to honor those who have made outstanding contributions to First Amendment rights. The award was created in 2006, and honors the nation’s fourth president, whose extraordinary efforts led to the ratification of the Bill of Rights. Nominees must have significant ties to Kentucky, and their efforts must have resulted in the preservation or expansion of freedom of the press and/or freedom of speech. The award recognizes a long-term commitment to these ideals.