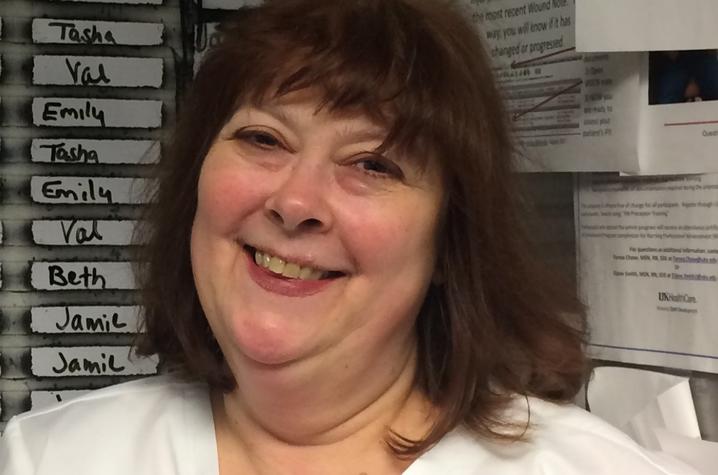 Tani Davis has worked as a nurse at UK HealthCare for more than 42 years.

LEXINGTON, Ky. (April 26, 2022) — Tani Davis of Versailles got her first job at the University of Kentucky in 1978, shortly after graduating with a degree in nursing from Midway College — now Midway University.

At the time, the $5.50 an hour she was offered at UK was the highest rate for registered nurses at any of the hospitals in town, so she took the job. Now, nearly 44 years later, Davis is one of the 175 employees who have more than 40 years of service at the university.

Throughout those four decades, she has had a front-row seat to the growth and expansion of UK and UK HealthCare’s from the Chandler Hospital building, now referred to as Pavilion H, to a health care enterprise that includes the towers of Pavilion A, Kentucky Children’s Hospital, Gill Heart Institute, Markey Cancer Center and much more.

Davis’ first nursing position at UK Chandler Hospital was in the kidney transplant unit but a few years later, she and many of her nursing colleagues in that area moved to the new Hematology and Blood and Marrow Transplant Program that opened in 1982 and became part of the UK Markey Cancer Center when it opened in 1985.

Taking care of oncology patients — specifically, those diagnosed with blood cancers such as leukemia and lymphoma — has been how Davis, who currently works as an apheresis nurse — has spent the majority of her career.

“I’ve found this to be an area that I’ve enjoyed and worked to help make a difference for the patients and their families,” Davis said. “Blood cancers affect people from a broad range of ages from pediatric patients to older adults and up until their diagnosis, many were very healthy individuals and I find they are usually very proactive in their cancer care and eager for the treatments available.”

Her time at UK also has allowed her to grow professionally by taking advantage of furthering her education with Davis completing her BSN (Bachelor of Nursing degree) in 1989.

Good benefits and a good retirement plan plus many options for advancement have been among the reasons Davis says she has been a longtime UK employee.

“I’ve also really loved the patients and families on the unit,” she said. “Working at a teaching hospital has so many advantages and opportunities for nurses just starting out and throughout their career.”

The benefits open enrollment for University of Kentucky employees is April 27-May 13. Click the links below to see what's new this year or to learn more about our health insurance plans.