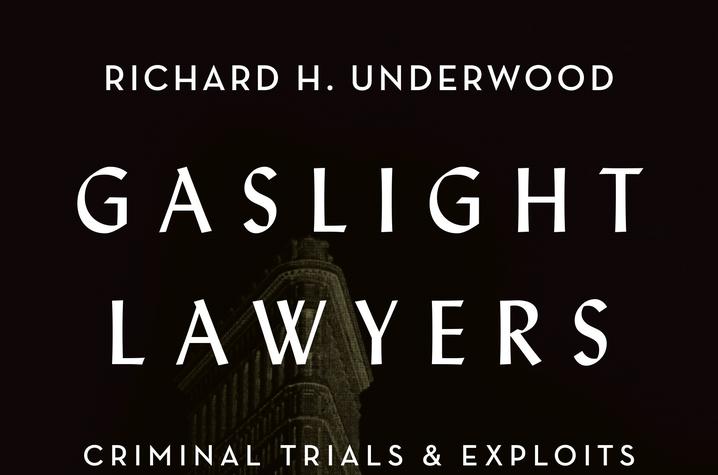 At the event, Underwood will discuss and sign copies of "Gaslight Lawyers." A history of crime and punishment, the 284-page book paints a serious but entertaining picture of colorful characters, courtroom drama and the emerging importance of forensic science and medical-legal jurisprudence in Gilded Age New York City.

From the 1870s to the early 1900s, post-Civil War New York City was becoming a wonder city of commerce and invention, art and architecture, and emerging global prominence. It was also a city of crime, corruption, poverty, slums and tenements teeming with newcomers standing in sharp contrast to the city mansions and the extravagant lifestyle of the rising American aristocracy. The New York City of those days is not just the venue of the intriguing true stories told in this book; it is also a supporting actor in them.

“My new book 'Gaslight Lawyers' tells many entertaining stories of the shenanigans of lawyers and judges in the criminal courts of New York City during the Gilded Age,” Underwood said. “Hopefully it will remind readers that: ‘(No) country can be well governed unless its citizens as a body keep religiously before their minds that they are the guardians of the law, and that the law officers are only the machinery for its execution, nothing more.’”

Drawing from the experience of a legal scholar and from a wealth of thorough research gleaned from trial transcripts, other court records, contemporary newspaper stories and memoirs, Underwood reconstructs and recounts the absorbing legal drama of a number of spectacular criminal cases. Among the murder trials included are the Nack-Thorn-Guldensuppe scattered body parts case; the trial of Frenchy for the murder of Old Shakespeare (the so-called "Jack the Ripper" case); the trials of Italian immigrant Maria Barbella, who escaped the electric chair with a defense of psychic epilepsy; the ordeals of the unfortunate Dr. Samuel Kennedy; and the trial of Florodora Girl Nan Patterson for the murder of gambler and man about New York, Thomas Caesar Young.

"Gaslight Lawyers" will be available for purchase through Shadelandhouse Modern Press LLC at http://smpbooks.com/.