LEXINGTON, Ky. (June 29, 2012) — The Apple iPad has become a "must-have" gadget for many Americans who use the lightweight tablet computer to read books, play games, or surf the Internet.

Five-year-old Hunter Harrison has one that he uses to speak.

Born with a neuromuscular disability, Hunter has experienced significant developmental delays in his motor abilities, including those required for oral speech. Unlike most children, who begin to make speech sounds spontaneously in their first year, Hunter's speech has proceeded slowly and with great effort. He also uses a walker and a wheelchair.

Yet in nearly every other way, Hunter is a typical 5-year-old boy. His eyes sparkle with a child's curiosity and mischievous humor. He knows his numbers, letters, colors and shapes. He is learning to read. Last year, he completed kindergarten at Jessamine Early Learning Village, in Nicholasville. He will begin first grade in the fall at Rosenwald-Dunbar Elementary School.

This is why it's imperative that Hunter have a communication system, to enable him to stay within a regular classroom at an appropriate age and grade level, says Jane Kleinert, associate professor in the Division of Communication Sciences and Disorders in the University of Kentucky College of Health Sciences.

"Children like Hunter, or children with autism who are more mobile, need a communication system they can carry with them or pull out of their pocket when they need it," Kleinert said. "The incredible technology that has come with the iPad has made it possible for these children to be more like typical children."

The iPad has become tremendously popular as an assistive device in schools around the country, where it has proven useful in helping students with a wide variety of disabilities. Part of its appeal is its adaptability and the ease with which applications may be built and customized to meet the needs of each individual user.

"It's become very very popular with children around the country with autism," Kleinert said. "It's been very successful in developing their communication. As a matter of fact, some of the best communication applications are relatively inexpensive and have been developed by parents of children with autism."

Kleinert and a colleague, Jacqui Kearns of UK's Human Development Institute (HDI), assessed the needs for augmentative and alternative communication (AAC) in multiple states across the country and discovered that less than half of the children who would benefit from AAC actually have it in place. The two are now working on a low-incidence initiative to develop communication systems for children with the most significant disabilities, supported with a grant from the Kentucky Department of Education, administered through HDI.

Through that initiative, and with funds from a UK Commonwealth Collaborative grant, they were able to lend Hunter an iPad loaded with Proloquo2Go, an AAC app. Hunter also comes to UK once a week to see a team led by Kleinert in the Communication Sciences and Disorders Clinic, along with Health Sciences graduate students Rachel Hooey and Seth Brashear. Through a routine of games and exercises that incorporate physical and speech therapy techniques, Hunter is learning to pronounce individual words and to put them together to make sentences.

"When Hunter first came he did not use his voice very much, so we used the AAC all the time," Kleinert says. "He needed a way to say, 'No, I don’t want to do that' or 'I want to play this game' or to answer questions like 'What did you do at school today?' or 'Do you need help?' Those kinds of things, he could use his augmentative system for. As he would use that, we would ask him to say what the device was saying at the same time. As he has progressed with his oral speech, we don’t use the AAC quite as much. But at school they use it for all of his academics and all his social interactions."

Hunter's parents say the combination of intensive therapy and augmentative communication have made a phenomenal difference.

"We’ve noticed that his speech is obviously becoming a hundred times better," said his mother, Melissa Harrison. "Before we started, we could barely get just the normal first words that most kids say like 'mom' and 'dad' and things like that. Now you can give him a book, and he can sit down and read it clear enough for you to understand what he’s trying to say. So he’s reading, and he’s reading to people, which before would have never happened."

Kleinert says that many other children with communication disabilities could benefit from a device like the one Hunter uses. But the biggest funders for AAC, such as Medicaid and Medicare, restrict funding to "dedicated instruments" specifically designed for communication. That means that, under current guidelines, a multitasker like the iPad does not qualify. That's unfortunate, as dedicated AAC instruments tend to be larger, often weighing several pounds, and much more expensive, frequently costing several thousands of dollars.

"Dedicated instruments certainly have a place for those who need more sophisticated equipment and who have very severe physical limitations," Kleinert said. "But for many children the iPad is a fantastic innovation. We want the funding agencies to know that these are about one-tenth the cost of a dedicated instrument, while they provide many of the same capacities," Kleinert said. "I think it is just a matter of getting that word out."

The iPad has become very popular In addition to the inherent portability and cost advantages, a tablet-based AAC system can also make social integration easier. Whereas a bulky, dedicated AAC instrument conspicuously marks its user as having a disability, an iPad is seen as perfectly ordinary, or even as a badge of status.

"I worked with a little boy, actually a young man now. He’s 20, but I met him when he was about 13 months of age. And for many years he used one of those big devices," Kleinert says. "He hated it. A couple of years ago, he got an iPad. He just finished his first year at Western Kentucky University. He used his iPad for everything, except for writing papers — he used a computer for that — but he fit right in. He didn’t look different with that big heavy instrument. He looked just like everyone else, with his iPad and his iPhone. I see that Hunter will be able to do that as well." 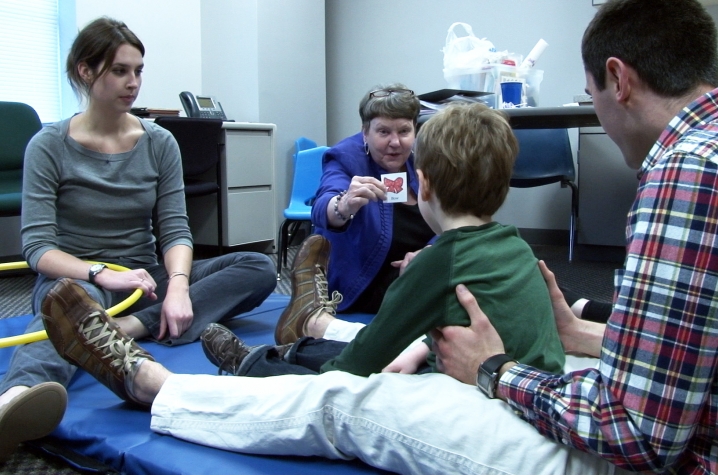