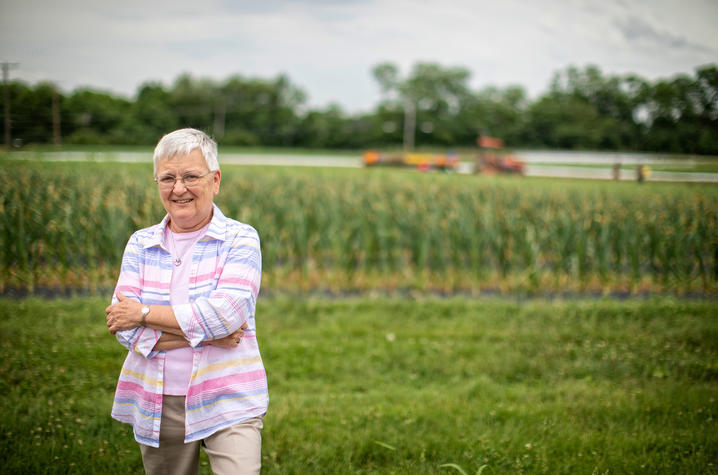 College of Nursing professor Deborah Reed came up with a unique way to address heath and safety on Kentucky's farms. Photo by Mark Cornelison

LEXINGTON, Ky. (June 7, 2018) ­– In Lincoln County, the hottest ticket in town isn't a big concert or hit musical. It's Jack Blair and his wife Thelma, two local farmers, performing on stage at the Lincoln County Extension Office in Stanford, Ky. In the show, Thelma, concerned with Jack's hearing, asks him if he remembered to wear ear plugs before working with his loud farm machinery.

The audience, comprising farmers from the surrounding community, roars with laughter.

This isn't Broadway. It's Farm Dinner Theater, a program started by University of Kentucky College of Nursing professor Deborah Reed, Ph.D. Local farmers come together to watch each other perform skits that are humorous to watch, but serious in nature. While they delight in Jack's feigned deafness, it serves as a reminder to use ear protection when working with machines.

Farming is dangerous work. Most farms in Kentucky are family owned and self-regulated, meaning occupational health and safety standards don't apply. With no one looking out for the well-being of farmers, Reed thought about ways to help farmers recognize hazards of their trade and implement safe practices.

"Health and safety topics have always been low on the priority list for farmers," said Reed. "They'll take care of their cattle or their crops long before they take care of themselves."

Lectures are ineffective, as farmers don't have the time or patience, and pamphlets are easy to ignore.

"Based on our research, we found that farmers learned best from watching each other and stories based on real situations," said Reed. "They like humor. From observing farmers and how they choose their work behavior we know they learn from an apprentice model where role modeling is so important."

Add free dinner as an incentive, and with a grant from the Centers for Disease Control and Prevention National Institute for Occupational Safety and Health, the Farm Dinner Theater was born.

The actors are real farmers. The scripts are real stories, based on situations the farmers face every day, including tractor rollovers and road safety, hearing conservation, fatigue, fall prevention, animal handling, skin cancer, cataract prevention, and the importance of a good communication plan – something Thelma Blair has already implemented.

"Jack was on the farm by himself, and he had a heart attack," said Thelma. "Now we're sure to let each other know where we'll be and for how long in case of an emergency."

Farmers age 50 and older have a mortality rate three times higher than younger farmers. As Reed says, farmers tend to learn at the elbow of another farmer. They might have a good role model for health and safety, or they might not. The goal of the theater is to move those social norms by identifying potentially dangerous habits and suggesting ways to modify those habits.

The Blairs are well-known and respected in their community. Both are involved with their local UK Agricultural Extension Office as well as the Kentucky Farm Bureau. When asked by the their local extension office agent if they wanted to participate, they jumped at the chance to help their fellow farmers. And they picked up a few tips for themselves.

"We're more cautious about falls, especially when getting on and off equipment," said Thelma. "And I fuss at my husband to wear sunscreen and a hat that protects his ears."

"From a cultural aspect, most farm meetings come with a meal. They love to eat together and talk," said Reed. "One of the major attractions of the theater, in addition to watching your neighbors on stage, is that couples or even families are invited to attend. So the event becomes a 'date night' or an entertainment for the family."

At one event, the children performed a skit about safety on the farm from their perspective. While families loved seeing the children perform, they were reminded about important issues such as how children should never be around chemicals used for the livestock.

One thing Reed didn't anticipate was how the farmers would come together and work out issues among themselves. At one event, a farmer mentioned how his father, who was grappling with Alzheimer's, kept trying to get the keys to the family tractor. Their solution was to move the tractor out sight. Once they did that, he stopped trying to drive it.

"You just moved it?" asked another farmer, seated two tables over. His family had been struggling with the same situation. He turned to his wife. "We can do that."

"It gives them permission to talk about things they otherwise would have never talked about, these sensitive topics," said Reed. "Because they do feel like they're all alone. And then they realize that others in the community are dealing with the same thing."

Not all of those sensitive issues are as serious as Alzheimer's. When Reed emphasized the importance of the power nap, which reduces fatigue and the risk of injury, a few of the farmers confessed among themselves that they napped during the day. Emboldened by these confessions, others resolved to incorporate power naps into their daily routine.

"One of the things we didn't expect to come out of this, is how people are saying it relieved their stress," said Reed. "One of the big topics in farming right now is toxic stress and suicide. Farms are affected by financial downturn. Farmers are either being advised to downsize or declare bankruptcy. So it gives farmers the opportunity to come together, discuss their situations, and to support each other. Non-farm people in the community come to these events and have a better understanding of the stressors that farmers face and can support them better."

The results of these events have been remarkable. Fifty percent of the farmers who attended reported to have incorporated changes in their habits and on their farms within two weeks. Sixty percent made changes within two months. The program was so successful, Reed, who has won numerous awards for the program and was named by Oprah Magazine as "One of Five Nurses Who Might Just Save the World", was appointed UK's first agricultural nurse, the first at a land-grant university. Her position is funded by UK's College of Agriculture, Food and Environment, and marks the beginning of a unique partnership between the colleges of Agriculture and Nursing.

"I'm living my dream," said Reed. "I get to have my clinical practice and help farmers."

As an agricultural nurse, Reed will continue education and outreach with farmers. She'll assess needs in communities, then mobilize resources to address them. For example, a survey of 1500 farmers revealed that only one-third had a recent tetanus shot. Even fewer get regular flu shots. Reed can coordinate with local health departments or students at the UK College of Nursing to facilitate immunization clinics at local events such as the dinner theaters or field days.

The research portion of the dinner theaters has concluded. The events are now locally owned; any group can access an online toolkit to stage their own productions. Reed has found that communities adapt the shows to address their particular issues, such as financial issues, caregiving and women's health. The officers in the agricultural extension offices can promote resources based on the issues addressed in the shows, as well as help spread the word to other farmers to attend or participate. Local advocates like Jack and Thelma Blair encourage everyone in their community and beyond to attend.

"With farmers, there are a lot of things you can prevent," said Thelma. "Issues that will affect you later in life. You need to build awareness for prevention."

For Reed, it's personal. She grew up on a farm, and her siblings maintain farms nearby.

"I'm a farm girl who grew up from fifteen miles from UK campus," said Reed. "I have four degrees from UK. I don't just bleed blue, I am blue. We're all about trying to serve the Commonwealth. We don't want our farmers to suffer. This is one way I give back to my own family and friends, and give back to the Commonwealth."