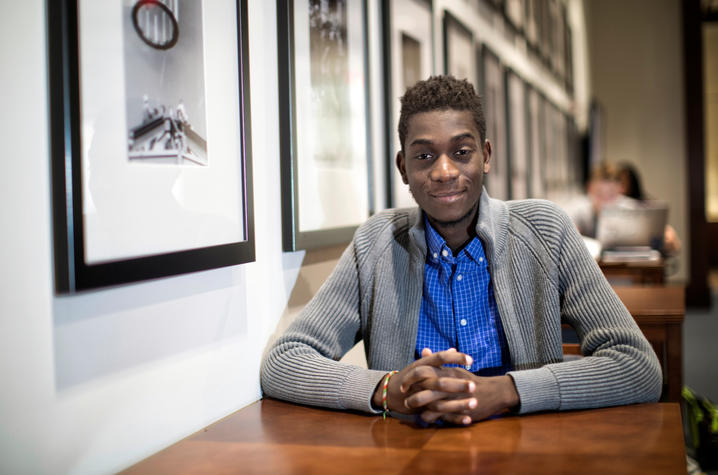 LEXINGTON, Ky. (June 26, 2019) — Nelson Mandela once famously said, “Education is the most powerful weapon, which you can use to change the world.” Esias Bedingar, a University of Kentucky alumnus, lives by those inspirational words. He hopes to use his education to eradicate malaria in his home country of Chad.

Bedingar also wants to make sure fellow international students have the opportunity to achieve their own ambitious goals. In partnership with UK, he has launched the Esias K. Bedingar Fund to provide financial support to undergraduate and graduate students from Africa.

“Scholarships are really crucial, because it’s financial support that really helps you achieve your goals,” he said.

Bedingar, a native French speaker, knew absolutely no English when he came to UK in 2014. In one semester, he completed the English as a Second Language (ESL) program. In May 2018, Bedingar graduated with a bachelor’s degree in public health, from the UK College of Public Health, and a minor in neuroscience.

As a Chellgren Student Fellow and student in the UK Lewis Honors College, Bedingar discovered his passion for research in two fields — medicine and global health. "I wanted to put my two interests together, so I can do future research on cerebral malaria," he said.

Bedingar is currently working toward a master's degree in global health and population at Harvard University. After Harvard, he plans to attend medical school.

For his continued leadership, Bedingar received many awards, including the 2018 Otis A. Singletary Outstanding Senior Award and the Algernon Sydney Sullivan Award.

Bedingar attributes his continued success, in part, to scholarships. With financial support, he was able to take advantage of a myriad undergraduate research opportunities. “Without all of those scholarships, I don’t think I would have been able to conduct all the research I conducted or have been able to go and present my research at conferences," Bedingar continued. "I wouldn't have even been able to travel to different conferences to learn more about neuroscience."

During his time at UK, Bedingar also participated in the Global Health Case Competition, hosted by the International Center’s Global Health Initiatives office. “It really gave me the tools to understand how to analyze case studies, mostly global health case studies," he explained. "That experience at UK of working with different organizations equipped me to be successful at Harvard.”

Now, Bedingar wants to provide opportunities for other deserving students.

Having lived in multiple African nations, Bedingar understands the growing, ambitious sentiments of his fellow Africans. He remains confident in this generation and the ones to follow. Bedingar believes, given the possibility of higher education, Africa will thrive.

“Those small scholarships can really help international students go and present their studies and their research projects."

By establishing a scholarship fund, Bedingar hopes to create a legacy of incoming African students — for an evolving tomorrow. “It’s really important to support those students, so that they can achieve great things later in their life."

For more information on how to donate, click here.