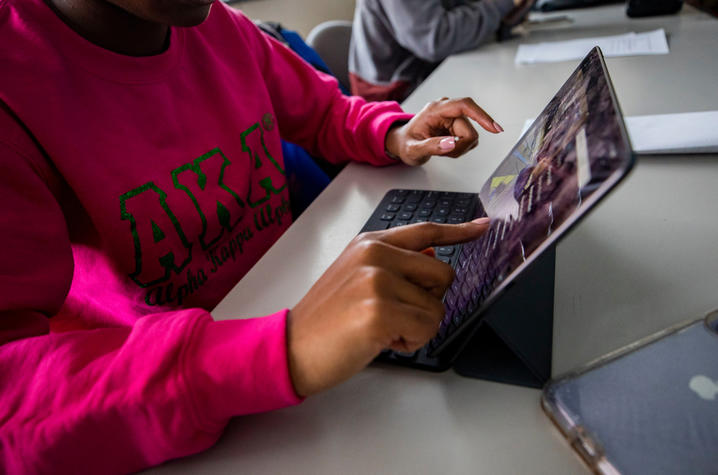 LEXINGTON, Ky. (Feb. 19, 2021) — First-year students at the University of Kentucky in Fall 2021 can expect to receive a free iPad, as the UK Board of Trustees today approved continuation of the school’s Smart Campus Initiative with Apple that began in 2019.

This third phase of the iPad initiative and Apple partnership will continue to level the technological playing field for all students; enhance in-class and online learning; and help build skillsets that contribute to students’ future success.

The iPads provided to students include an app — developed by students for students — that is geared toward a freshman audience and designed to ease the transition to the University of Kentucky by providing student-specific community activities; health, financial wellness and educational resources; checklists; and access to their success team.

In other action today, the Board of Trustees approved awarding an Honorary Doctor of Humane Letters to Deirdre Lyons and Carl F. Pollard. The honorary degree recognizes extraordinary contributions to philanthropy, human development, education or societal well-being.

Deirdre Lyons, a native of Dublin, Ireland, co-founded with her husband Pearse Lyons the global animal health company Alltech, which is based in Nicholasville, Kentucky. Alltech is a $2 billion company with more than 5,000 employees in over 120 countries. As Alltech’s director of corporate image and design, Lyons oversees architecting, designing and outfitting Alltech’s facilities in nearly 100 countries to ensure a consistent brand image.

Lyons’ many civic contributions have brought worldwide attention to Lexington as well as helped people around the world.

She has achieved local, national and international accolades on behalf of Kentucky through her work on: the historic Alltech FEI World Equestrian Games™ 2010; various arts initiatives, including the annual Alltech Vocal Scholarship Competition and Alltech Celebration of Song; humanitarian endeavors as far away as Haiti and as close as local primary schools’ science laboratories; and her service on numerous leadership boards in Kentucky, including the Kentucky Chamber of Commerce, the Kentucky Horse Park Foundation, the Kentucky Equine Humane Center, the University of Kentucky Sanders-Brown Center on Aging and the Lexington Convention Center.

Carl Pollard is a Lancaster, Kentucky, native who graduated from UK in 1960 as a first-generation college student with a bachelor’s in commerce. He began his career as a partner in a Louisville accounting firm. In 1968, he joined Extendicare and was instrumental in its development into Humana Inc., a Louisville-based Fortune 500 health care company. He held various senior positions at Humana including chairman and CEO of the hospital division, which later became Columbia Healthcare Corporation, where he served as chairman of the board until his retirement in 1994. A lifelong horse racing enthusiast, Pollard is a former chairman of Churchill Downs and owns CFP Thoroughbreds.

Pollard’s generous philanthropy has had a large impact on his alma mater. He endowed the Carl F. Pollard Professorship of Health Economics in the UK Gatton College of Business and Economics and the Carl F. Pollard Scholarship Fund, which has awarded well over $1 million in scholarships to benefit first-generation college students. He recently expanded the fund to $10 million to provide educational opportunities for even more students. He also is president of the C.F. Pollard Foundation, which supports Kentucky nonprofit organizations.

Pollard was named to the UK Alumni Association Hall of Distinguished Alumni in 1995 and the UK Gatton College of Business and Economics Alumni Hall of Fame in 1994. He has served as a member of numerous UK boards.