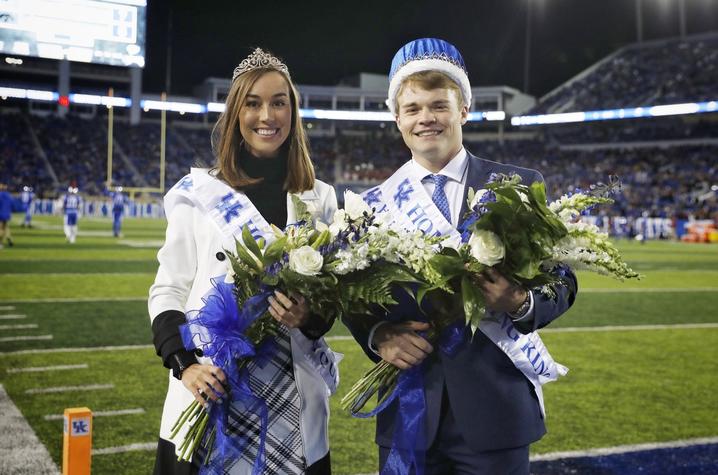 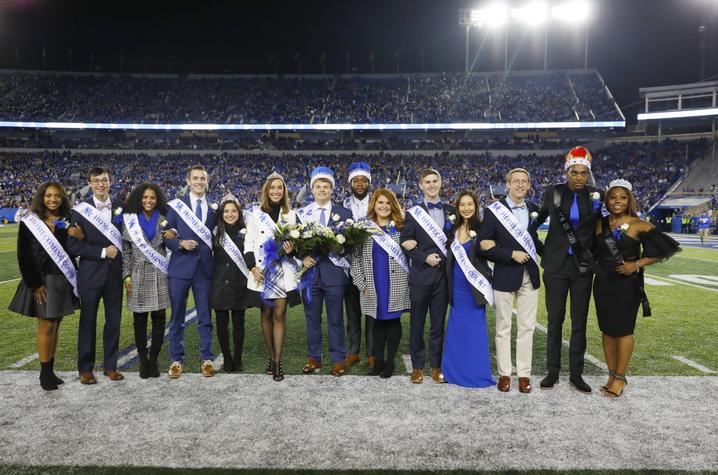 LEXINGTON, Ky. (Oct. 12, 2019) — Maggie Davis, the daughter of Beth and John Davis of Lexington, and Jonathan Thomas the son of Judy and Mark Thomas of Hopkinsville, Kentucky, were crowned the University of Kentucky Homecoming queen and king during the halftime ceremonies at the UK vs. Arkansas Homecoming football game at Kroger Field Saturday night.

The winners were determined by student voting earlier this week.

Davis, a senior majoring in broadcast journalism, political science, and digital media and design, was nominated by the Chi Omega sorority. She is a Singletary Scholar in the Lewis Honors College and is an active member of Chi Omega.

Thomas is a senior majoring in economics and business management and is a member of the Sigma Chi Fraternity, Cats For Christ and the Economics Society. Thomas was nominated by Alpha Delta Pi sorority.

Joe Walden, from Cincinnati, Ohio, is majoring in psychology and neuroscience and minoring in Spanish. He was nominated by Alpha Phi Omega fraternity and the Center for Community Outreach.

Tsage Douglas, a Lexington native, is a senior dual-degree candidate in public health and international economics, French. Douglas is also a student in the Lewis Honors College. She was nominated by the Center for Community Research.

Matthew Luce, of Downers Grove, Illinois, is a junior majoring in marketing and information communications. He was nominated by the Student Activities Board.

Andrew Lin, a Lexington native is a junior majoring in chemical engineering and music performance. He was nominated by the Engineering Living Learning Program.

Maya Woolfolk, of Louisville, Kentucky, is a biology major in the Lewis Honors College. She was nominated by the Alpha Kappa Alpha Sorority Inc.

Sally Martin, of Owensboro, Kentucky, is a senior in the Lewis Honors College who double majors in marketing and media arts and studies. She was nominated by DanceBlue.

Minji Kim, a senior at UK, Kim is from Seoul, South Korea, majoring in nursing and minoring in psychology. Kim was nominated by the Undergraduate Nursing Activities and Advisory Council.

Michael Hasis, from Fayette Township, Pennsylvania, is a senior majoring in communication sciences and disorders with minors in family sciences, linguistics and German. Hasis was nominated by the American Sign Language and Deaf Culture club.