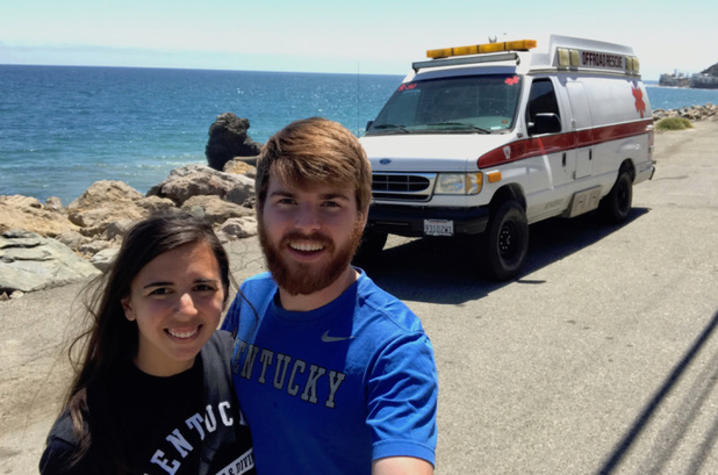 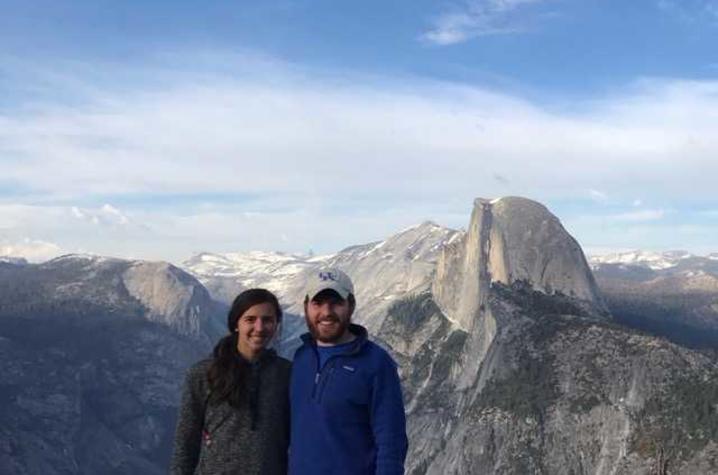 LEXINGTON, Ky. (Aug. 3, 2017) — The first thing Christa and Jon David (JD) Hammer saw after they landed in Los Angeles International Airport and before they embarked on their journey along the West Coast was the inside of an ambulance.

The ambulance was turned into a camper, and the couple drove it around California from Los Angeles to Yosemite, then down the Pacific Coast Highway from San Francisco to San Diego. The couple visited family in Redondo Beach and fulfilled a dream of hiking Half Dome in Yosemite.

“The ambulance is Christa’s brother’s – he travels to car racing events and bought this ambulance and converted the inside,” JD said. The ambulance is older and has a smaller, van-like feel.

In 2011, Christa Hammer enrolled at UK on a diving scholarship and competed for four years. During her first three years, she earned her degree in psychology and completed her nursing prerequisite courses before entering nursing school as a senior diver. As a student-athlete, she had many tutors at the Center for Academic and Tutorial Services (CATS) – one of which was JD.

The first semester, JD tutored Christa in anatomy. The following semester, they met twice a week to study both anatomy and chemistry.

“The first semester that JD was my tutor, I got a 4.0,” Christa said. She ended up inviting JD to the CATSPY Awards with her, an annual event held to celebrate and honor the academic, athletic and community excellence achieved by UK student-athletes.

“The following fall I started med school and asked her on a date to ride bikes on the Legacy Trail. Eighteen miles later, she was a little tired and thankfully didn’t have a diving meet the next day,” JD said. “Long story short, we continued to date and got engaged and married in 2015 – before her second year of nursing school and my third year of med school.”

Needless to say, their dates often consisted of long nights of studying.

“It’s nice because we’re both in different parts of medicine. Not just nursing, but NICU nursing; not just medicine, but ophthalmology,” JD said. “It’s made me more cognizant of how I interact with nurses after hearing her different perspectives. As a med student, you have to be humble enough to know that there are situations where experienced nurses may be more knowledgeable in the hospital than new residents.”

Meanwhile, Christa learned how to become a skilled nurse and work with interprofessional teams.

“I learned a lot about myself at the UK College of Nursing,” Christa said. “I know what it means to have good friendships during nursing school, and I appreciate everything my teachers have done for me.”

JD graduated from the UK College of Medicine in May 2017. After traveling down the California Coast this summer, JD will complete his ophthalmology residency in Gainesville, Florida, at the University of Florida Health Shands Hospital, while Christa will work in the NICU at a nearby private hospital, North Florida Regional Medical Center.

“I speak for both the College of Nursing and the College of Medicine when I say we are very lucky to have had these two outstanding students, and we are eager to watch them grow as professionals. We wish them a life of happiness,” Janie Heath, dean and Warwick Professor of Nursing, said.