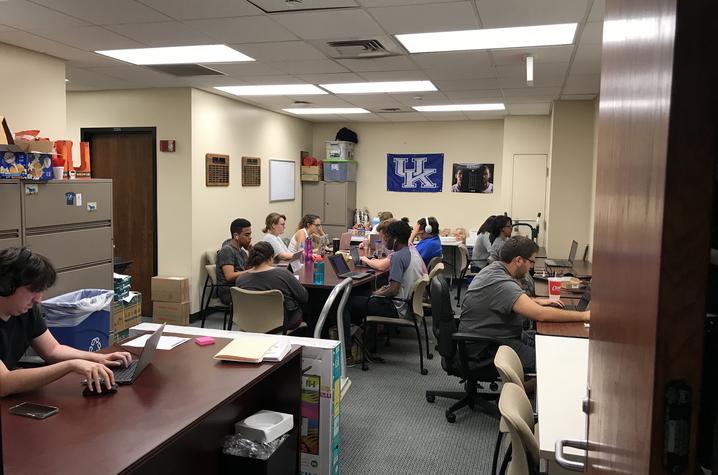 The UK Intercollegiate Debate Team arrived on campus a week before classes and spent 70 hours in the office preparing for the season.

LEXINGTON, Ky. (Sept. 7, 2017) — The University of Kentucky Intercollegiate Debate Team is just over a week away from the opening of their competitive season and expectations are strong. The top two partnerships from last season return this year to lead a strong team. The sophomore duo of Dan Bannister and Anthony Trufanov return from a historic freshman campaign where they were ranked 13th in the nation. Seniors Theo Noparstak and Amar Adam hope to build on their 17th ranking from a year ago.

Director Dave Arnett credits the team’s recent success to recruitment and a strong commitment to research, which begins annually in June. The team officially arrived on campus a week before classes and spent 70 hours in the office preparing for the season.

The team will open its season at Georgia State on Sept. 16-18, where more than 100 teams will compete. At the end of the month Dan Bannister and Anthony Trufanov will represent UK in the 46th annual Kentucky Round Robin. It will feature the top seven teams in the country. Other teams in attendance will include Harvard, Northwestern, University of Southern California, Emory, University of Central Oklahoma and the University of Kansas.

The Intercollegiate Debate Team is housed in the UK College of Communication and Information.