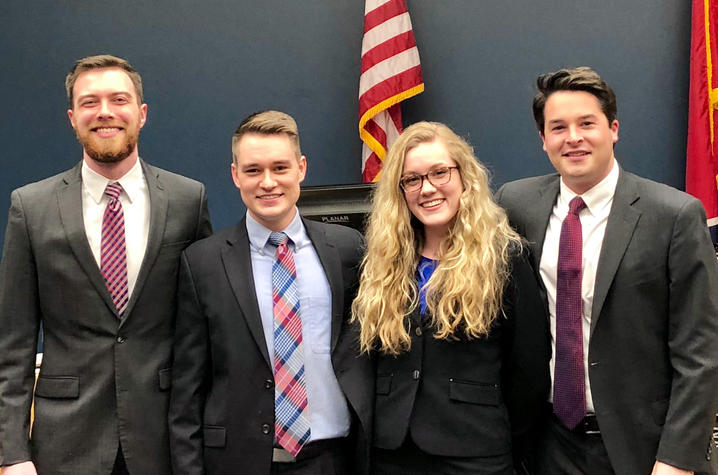 To prepare for the competition, the team practiced four times a week since the start of the spring semester.

Boggs and Taylor beat 22 other teams from Arkansas, Missouri, Kentucky and Tennessee to win the coveted top spot as the region's best trial advocacy team. They are the 11th team in UK Law’s history to have raised the bar and won.

"Matthew and I are thankful for all the support we received preparing for this tournament. Our teammates and coach, as well as several students and alumni, provided valuable feedback as we crafted our case,” said third-year law student Taylor.

Madeline Moss and Vince Taormina also represented UK Law at regionals and had noteworthy performances before being eliminated in the third round. All four students and Allison Connelly (UK Law ’83), director of the Legal Clinic and the James and Mary Lassiter Professor of Law, will travel to Austin, Texas, in April to compete in the TYLA National Trial Competition.

“Caleb and I are incredibly thankful for the opportunity to represent the College of Law and the university on a national stage,” second-year law student Boggs said. “Professor Connelly has been the driving force behind this effort and we hope to see a lot of success in Austin, Texas!”

Professor Connelly serves as the faculty advisor for Trial Advocacy Board and is the coach of the college’s highly successful trial teams. To prepare for the competition, the team practiced four times a week since the start of the spring semester.