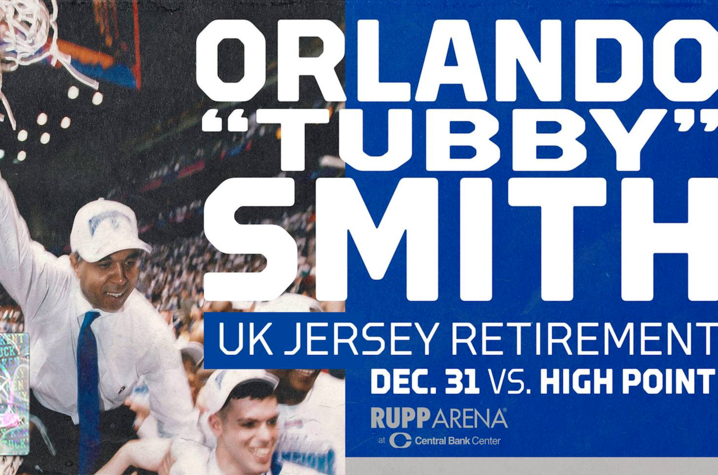 “It is with great pride, enjoyment and a sense of excitement that we add one more name to the list of people who will see their names in the rafters of Rupp Arena and that’s Orlando ‘Tubby’ Smith,” Barnhart said. “A national championship coach, National Coach of the Year, a gentleman who brought so much class, honor and excellence to UK, Tubby is special and so deserving.  We are thankful to have the chance to honor him and will do so when his team comes to play the Cats in December. A lot of folks are going to want to come back and be part of that time. Tubby and (wife) Donna contributed so much to the fabric of the University of Kentucky and we want to thank them in a special way.”

Smith was head coach of the Wildcats for 10 years, from the 1997-98 season through the 2006-07 campaign. His first team became known as the “Comeback Cats” after the Wildcats erased multiple double-digit deficits en route to a 35-4 record and UK’s seventh NCAA championship. Trailing Duke by 17 points, with less than 10 minutes to play in the South Regional final, the Wildcats stormed back to win 86-84. Down by 10 against Stanford in the second half of the NCAA semifinal, the Cats clawed back to force overtime and an eventual 86-85 victory.  And, it wouldn’t have been fitting if UK hadn’t trailed Utah by 10 points at halftime of the title tilt, again rallying to take the trophy by a score of 78-69.

During his 10 seasons, Smith coached the Cats to at least 22 victories each season, totaling a 263-83 record (76.0%) with the Blue and White. His teams won five regular-season SEC championships and five SEC Tournament crowns, featuring a league championship (regular season or tournament) in seven of his 10 years at UK. His teams advanced to the NCAA Tournament in all 10 seasons, including six trips to the Sweet 16, and had a 23-9 record (71.9%) in the national playoffs.

During his outstanding career, Smith also was head coach at Tulsa, Georgia, Minnesota, Texas Tech and Memphis before his current post at his alma mater. He enters the upcoming season with a career head-coaching record of 631-355.

Smith was notified by Barnhart via a surprise Zoom call earlier Tuesday.

“That’s very humbling,” Smith said during the call. “I’m certainly grateful to have had the opportunity to lead that program. Some wonderful people there, wonderful fans. You can’t find better people. They have a passion for the game, not just basketball but for the Wildcats, period. Thank you for doing that. We’re looking forward to it.

“Do you have enough tickets for my family?” Smith continued, laughing. “You know we have 17 brothers and sisters — it’ll be an empty town in Scotland, Maryland!”

Smith will be the 44th retired jersey to hang in the rafters of Rupp Arena, including fellow national championship coaches Adolph Rupp, Joe B. Hall and Rick Pitino. Current UK mentor John Calipari, also a national champion coach, was excited to learn the news.

“Tubby and I have been friends for years,” Calipari said. “He is so deserving of this honor. He won big here and he did it with class. Tubby impacted so many people in and around this program and he is loved by the players who played for him and by this fan base. I can’t wait to see his banner raised.”