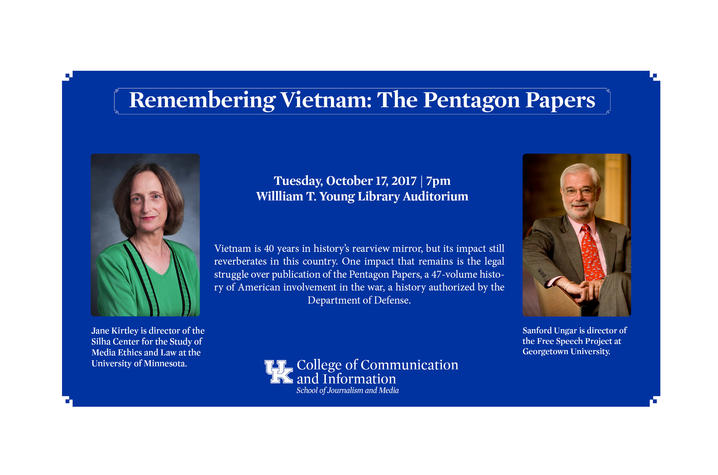 LEXINGTON, Ky. (Oct. 16, 2017) — The Vietnam conflict may just be a unit in a history class to many college students, but its impact still reverberates in 2017.

One of those impacts, in fact, has a strong bearing on the ability of the news media to publish and broadcast without the fear of government interference. That impact is the focus of “Remembering Vietnam: The Pentagon Papers,” a discussion of the Supreme Court decision in New York Times v. United States.

Media law and ethics scholar Jane Kirtley, a journalism professor and the director of the Silha Center at the University of Minnesota, and Sanford Ungar, director of the Free Speech Project at Georgetown University, an adjunct professor at Harvard University and the author of a book about the case, will discuss the effort of the government to prevent publication of stories about the history of U.S. involvement in Vietnam.

The program will be held at 7 p.m. Tuesday, Oct. 17, in the UK Athletics Auditorium of the University of Kentucky's William T. Young Library. The event is free and open to the public.

Outgoing Defense Secretary Robert McNamara authorized production of the history in 1967, but it wasn’t completed until 1970. Daniel Ellsberg, who had worked on the report, which turned out to be 47 volumes, believed the war would end quickly if the report was available to the public. When he failed to convince several office-holders to release the report, he handed 43 volumes over to The New York Times.

Once the newspaper started publishing its stories, the government went to federal district court and a judge issued an order imposing prior restraint. The case ultimately ended up in the Supreme Court, which ruled the government had failed to prove that further publication would endanger national security.

“We are indeed fortunate to have these two scholars bring a 45-year-old Supreme Court case to life and into 2017. As we have discussed their presentations, I have been amazed at how important that decision remains all these years later,” said Mike Farrell, director of the Scripps Howard First Amendment Center and interim director of UK’s School of Journalism and Media in the College of Communication and Information.

The program is presented by the School of Journalism and Media and the Scripps Howard First Amendment Center.