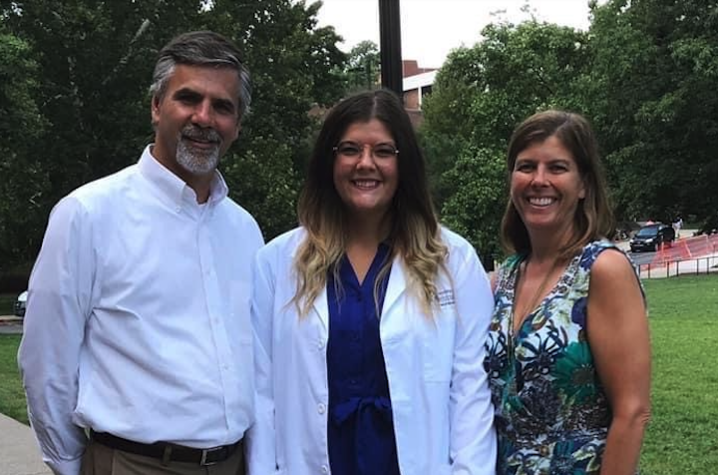 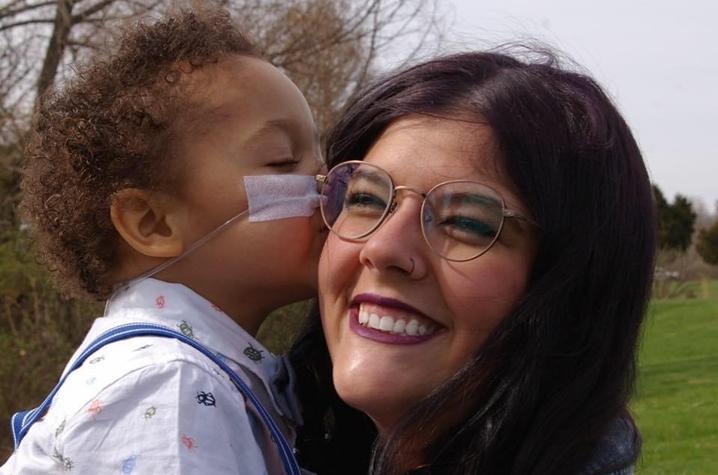 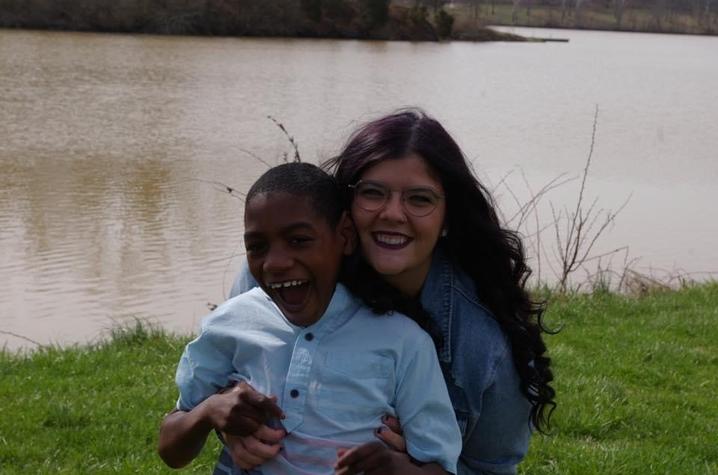 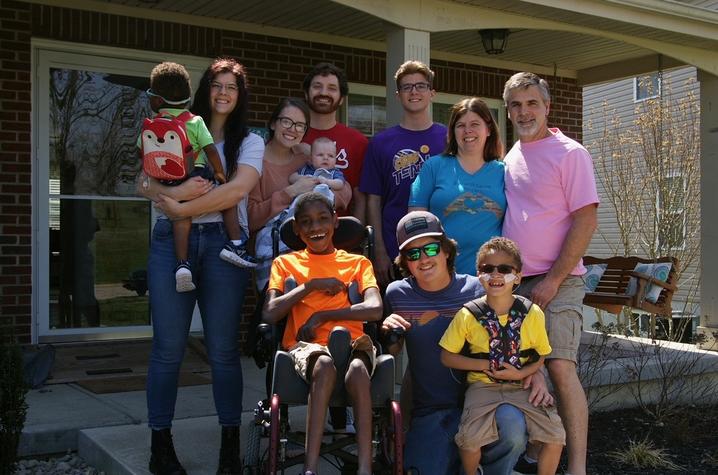 LEXINGTON, Ky. (Dec. 6, 2022) — According to her family, Gabriella Smith was the second oldest of six and “the helper child” of the bunch. She lived up to this nickname at home in Alexandria, Kentucky, caring for her three youngest siblings who have special needs. She demonstrated it through church, traveling with teams across Central America to make health care more accessible.

Smith hoped to continue helping others as a doctor. She pursued her education at the University of Kentucky College of Medicine’s main campus in Lexington. In spring 2023, she was expected to graduate with her Doctor of Medicine degree, which would help her fulfill her dream.

But tragedy struck in 2021. While on a springtime hike at Red River Gorge, Smith suffered a 150-foot fall. She died at 24 years old, just halfway through her medical training. This unexpected loss was devastating to her family, the College of Medicine community and everyone impacted by Smith's compassionate nature.

However, this is far from the end of Smith's legacy of helping others.

Her parents, Kerensa and Randy Smith, her sister Alexis Fannin, and the UK College of Medicine have come together to honor Smith by supporting future medical students who share a similar dream of serving others through medicine.

“Gabriella had this firm belief that everyone should have access to quality health care,” Kerensa Smith said. “We want to do everything we can to keep her dream going.”

To UK College of Medicine faculty, students and leadership, Smith's presence lit up a room. Classmate Emily Blanford described her as a social butterfly who said what she felt, and because of that, they became “fast friends.” The same was true for Gabby Armstrong, who connected with Gabriella on the first day of school over their shared name. They were roommates by second year.

But beyond Smith's charming and sometimes goofy personality was a hard-working medical student who was loyal to her friends and dedicated to her family.

“She adored her siblings and wrote letters to them in the mail all the time,” Armstrong said.

“And if her family needed anything, she would make that hour-and-a-half drive,” Blanford added, even if it was just to watch Disney movies with her brothers.

Smith's dedication to family immediately stood out to Christopher Simmons, M.D., Ph.D. He was her faculty advisor for the Friesian House, one of 10 learning communities that gather students in smaller groups to foster connection and community. When Simmons held introductory one-on-one meetings with his students, many were visibly nervous, but Smith instantly sat down and smiled, showing she was genuinely happy to be there.

It was during that one-on-one that they connected over their shared interest in pediatrics. Smith revealed that neonatology was the specialty she wanted to pursue. She also discussed her family and how she loved caring for her siblings. Simmons grew up with a family member who had spina bifida, so he was inspired by Smith's compassion for children with disabilities.

“That set her up in my mind to be this ideal pediatrician,” Simmons said.

As a pediatrician, Smith hoped to make a worldwide impact. She bonded with fourth-year UK medical student Sam Fugate, not only because of their shared Northern Kentucky roots (and love for Skyline Chili) but also a passion for global health. They were both in the global health concentration, and Smith founded the global health student organization in which he was involved.

“Gabriella just loved really hard and deeply, and global health was her way of expanding that love across the world,” Fugate said.

Smith's sister Alexis said global health “was what was most near and dear to her heart with medical school” and the topic of many of their late-night chats. Smith had already traveled to Guatemala and the Dominican Republic providing health care for those in underserved areas. During undergraduate training at Bellarmine University, Smith was a member of Alpha Phi Omega National Service Fraternity and heavily involved in the school’s chapter of Timmy Global Health, serving one year as president and trip leader. In 2018, she received the Knight of Honor Award, an annual award given to two seniors who represent the university's values of academic excellence, intrinsic dignity, social responsibility, integrity, hospitality and stewardship.

Early on, Meredith Landorf, M.D., assistant dean for the UK College of Medicine-Northern Kentucky Campus, recognized Smith's potential to become a great doctor. She knew the Smith family because they were embedded in the Northern Kentucky community. Smith's sister Alexis was her daughter’s gymnastics coach and even inspired the middle name of her youngest. Landorf’s two sons participated in gymnastics with Smith's brother.

After the accident, Landorf brainstormed ways to continue Smith's legacy. She inquired with UK Philanthropy about creating a scholarship in Smith's honor to support students “who are walking the journey that she was walking.”

An endowed scholarship fund came to fruition in 2021. Now named the Gabriella Smith Memorial Scholarship, it will support one or more annual scholarships for incoming medical students at any UK College of Medicine campus who share Smith's passion for global health, particularly for students with financial need. Landorf and her husband, Michael Geiger, vow to support the scholarship until it reaches endowment so the fund can provide at least one scholarship per year.

Fittingly, the first one will be presented in the spring — when Smith was set to graduate.

“Every time I put on my white coat, I wanted to make sure I had a piece of Gabby with me, knowing that I get to do the things that she didn't get to end up finishing accomplishing here,” Landorf said. “So she's got to work on it from heaven. And this scholarship will be a way for that to happen.”

So far, the Gabriella Smith Memorial Scholarship has reached more than $105,000, with all of the money supporting future doctors.

The weekend before Smith passed away, her group of medical school friends invited her to a cabin getaway. But she didn’t go — she had just received an opportunity to shadow in a neonatal intensive care unit, and she couldn’t pass it up. Her friends say that demonstrates just how committed Smith was to her future career of helping others — and why the scholarship in her name is so special.

“She had so much love to give for her family, her friends, and anyone in need,” said her classmate and close friend Jonathan Greene. “It’s tough knowing she won’t be at our Match Day ceremony or graduation and have that MD after her name that she worked so hard for two years. It’s important that with this scholarship, she will still be a part of the College of Medicine.”

At the funeral, the Smith family was flooded with support, including community members from her church, Bellarmine University and the UK College of Medicine. In his testimony to her, house advisor Simmons said that even though Smith hadn’t received her medical degree yet, it already felt like she was a doctor.

“Medical students learn the ins and outs of medications and procedures and physiology and pathology, but at the end of the day, you’re going to take care of people,” Simmons said. “Gabriella was the kind of person who has grown up taking care of people. Medical school was just another step.”

Her mother, Kerensa, felt that, too, during a recent visit to the hospital with one of her sons. She sat in the waiting room and observed the physicians and patients who walked by. She found peace knowing that her daughter would have fit right into the health care setting.

“She would not have been a doctor who ran out the door because the pump went off or because of the IV pole beeping,” Kerensa said. “She would have jumped right in.”

Though Smith's life was tragically cut short, her impact has already been felt through her work in global health care, her compassion for her family, and her hard work as a medical student. With the scholarship fund, she will advance health care in Kentucky and beyond by passing along the opportunity to future doctors.

The “helper child” of the Smith family will continue her legacy.

If you would like to contribute to the Gabriella Smith Memorial Scholarship fund, please reach out to Kristin Shattuck, director of philanthropy, by emailing kristin.shattuck@uky.edu or calling 859-396-9331.