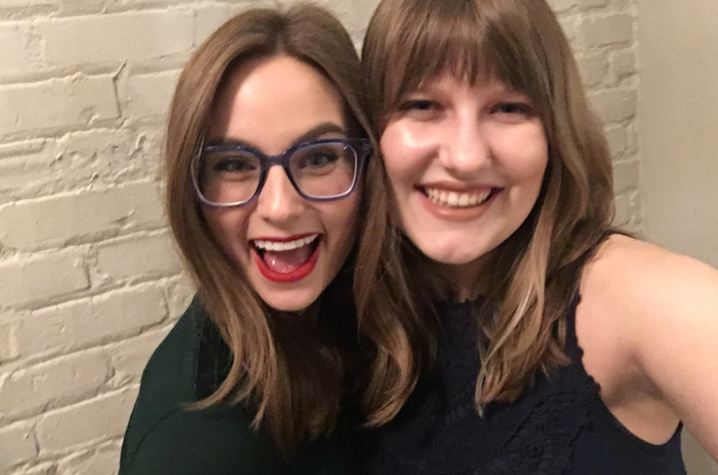 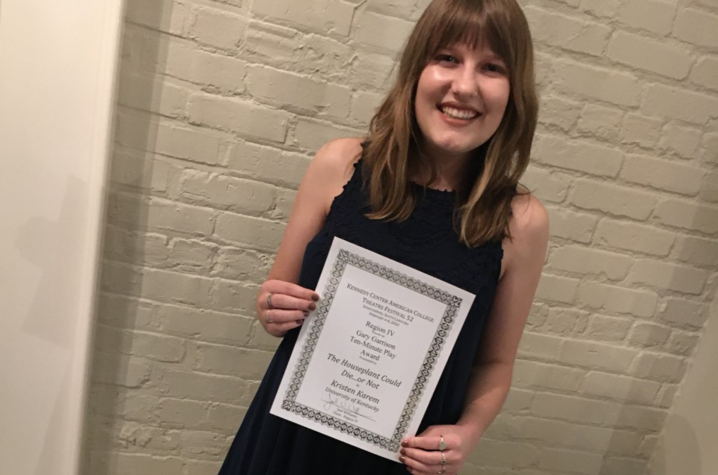 The two young playwrights, who developed their plays in the Playwriting I course in the UK Department of Theatre and Dance, submitted their works to compete among scores of other student playwrights from across the region that includes Kentucky, Tennessee, Virginia, North Carolina, South Carolina, Georgia, Florida, Mississippi and Alabama.

Kristen Karem’s play, "The Houseplant Could Die…Or Not," and Kelsey Waltermire’s play, "From Around Here," were among the six finalists selected for the KCACTF Regional conference. The plays were rehearsed during the week of the conference and then presented at the National Playwriting Program (NPP) Ten Minute Play Festival held Feb. 8 in Spartanburg.

Karem received the Gary Garrison Ten Minute Play Award, and her play is now one of two plays from the region and 16 across the country that are being considered for the national NPP Ten Minute Play Festival at the Kennedy Center in Washington, D.C. Karem will hear in April if her play has been selected as a national finalist.

“I am very excited and grateful to receive this award from the KCACTF Region IV, which I would not have gotten without the brilliant work of my creative team at the festival,” Karem said. “I am grateful to have such an incredible playwriting mentor, Herman Farrell, who encourages all of his students to explore their talents and creativity.”

Waltermire’s play reading was recognized at the regional conference for its direction.

“My play 'From Around Here' is a dark comedy that follows the return of a young woman to her small southern hometown, and when tragedy strikes, she experiences firsthand how gossip can camouflage the reality of situation and illuminate the true nature of people’s beliefs," Waltermire said. "I was touched by the amazing response my piece received from the audience, for I had several audience members thank me for writing the piece, bringing awareness to some tough topics, and portraying the characters and the town with truth and humor.”

“I am incredibly proud of these two playwrights and their mentor, Herman Farrell,” Tony Hardin, UK alumnus and current chair of the Department of Theatre and Dance, said. “When I was an undergraduate student in the early '90s, the department was heavily involved in KCACTF, and I am thrilled to be able to support our students and the return of this department to the Kennedy Center festival.”

“This is an amazing accomplishment for both of these emerging playwrights,” said University Research Professor Herman Farrell, their playwriting instructor and mentor. “I am so glad that their sharp, insightful creative work has been recognized at the regional level by theatre professionals and academics. And I am proud of the training that they have received in the UK Department of Theatre and Dance that provides numerous opportunities for theatre and dance artists to thrive and excel.”

KCACTF is a national festival held each year in April in Washington, D.C. The national festival is the culmination of eight regional festivals held during January and February. Started in 1969 by Roger L. Stevens, the Kennedy Center’s founding chairman, the Kennedy Center American College Theater Festival is a national theater program involving 20,000 students from colleges and universities nationwide annually. From the beginning, the organization has served as a catalyst in improving the quality of college theater in the United States. KCACTF has grown into a network of more than 700 academic institutions throughout the country.