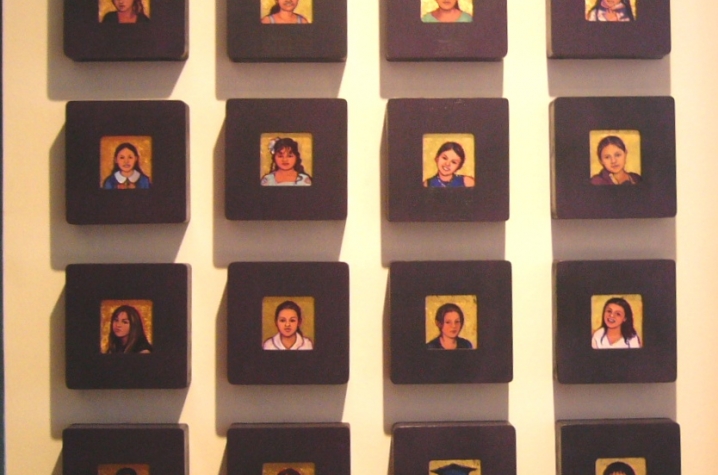 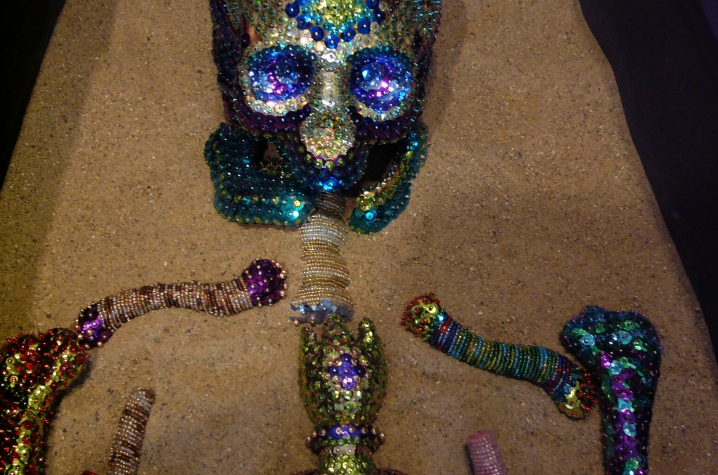 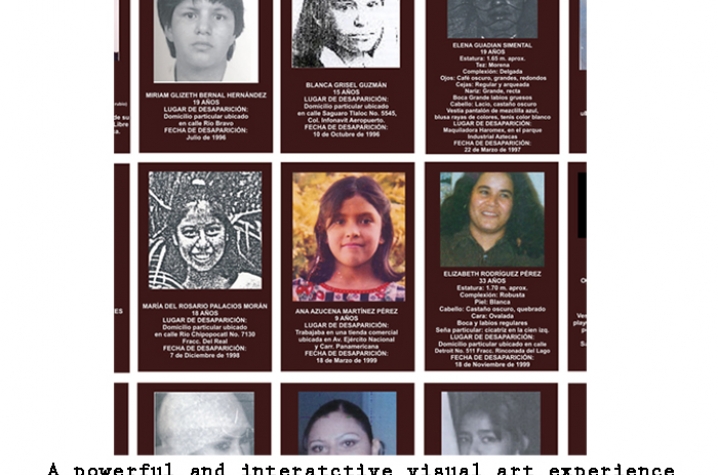 LEXINGTON, Ky. (Oct. 11, 2011) − A new powerful and interactive visual arts exhibit at the Tuska Center for Contemporary Art remembers the missing women of Juárez, Mexico. "Wall of Memories: The Disappeared Señoritas of Ciudad Juárez," by local artist Diane Kahlo, hopes to stimulate conversation on the consequences of a society that marginalizes certain members of its community.

Through her exhibition "Wall of Memories," artist Diane Kahlo is hoping to address not only the femicide of women just miles from the U.S. border, but also the implications of a society when it devalues and marginalizes the life of any of its members through classifications of race, class, sexuality, gender and other labels. Since an official count began being taken in 1993, hundreds of women’s bodies have been found violently attacked and murdered in the Juárez community.

The artist felt this was a very important topic that needed to be brought to the attention of more people and so she set out to create this exhibition. "I’m not a sociologist, not a scholar, I’m an artist and decided to address this as an artist," says Kahlo.

Funded in part by the Kentucky Foundation for Women, "Wall of Memories" includes small, iconic portraits of more than 350 missing and murdered girls, as well as sculpture and video pieces.

Several events have been scheduled in conjunction with the "Wall of Memories" exhibit. A showing of the film "Señoritas Extraviadas," by director Lourdes Portillo, on the subject of femicide in Mexico will be presented at 4 p.m. Thursday, Oct. 13, in Worsham Theater at the UK Student Center. Audience members who watched the film are then invited to a discussion on the movie with Kahlo, Verónica Miranda and Carmen Martínez Novo, director of the Latin American Studies Program at UK. The film discussion will take place in Room 230 of the Student Center. Later that same evening, Kahlo will participate in an Artist Talk on her exhibition from 6 to 7:30 p.m., at the Tuska Center for the Contemporary Art. All three events are free and open to the public.

The artist will also participate in another event on campus later this month. "Depicting the Difficult: A Project Generator for Writers and Artists" will be presented 6:30 to 8 p.m. Thursday, Oct. 20, in the Tuska Center for Contemporary Art. Moderated by Beth Connors-Manke, a lecturer in Division of Writing, Rhetoric and Digital Media, this project generator is open to writers, visual artists, filmmakers, performance artists and musicians working on projects about visceral social and political issues, especially those related to violence. The goal of this workshop is to gather together writers and artists to share their current projects and to catalyze future multi-modal, collaborative, politically engaged projects in Lexington. Kahlo will speak about her process of researching and depicting the women killed in Juárez, as well as her theoretical approach to femicide and the socio-political issues along the U.S.-Mexican border. This event is sponsored by UK's Division of Writing, Rhetoric and Digital Media, Department of Art, and Latin American Studies Program. To register for the free public workshop, email b.connors-manke@uky.edu.

Much of Kahlo's childhood was marked by moving due to her father’s work. The family crossed the country spending time in El Paso, Florida, Philadelphia and southern California. In 1965, at the age of 15, the artist's father died suddenly. Kahlo's mother relocated her and her five siblings from California to the arts community of Berea, Ky. At a very young age, Kahlo knew she wanted to be an artist and in high school she began to focus her attention on art. Kahlo currently resides in Lexington, Ky., with her husband, artist Steve Armstrong, and two children Patrick and Ana. Art enthusiasts may recognize the last name and in fact Kahlo has an art pedigree. Her grandfather was a cousin of Wilhelm Kahlo, whose daughter, Frida Kahlo, became one of the greatest artists of the mid-20th century.

Part of the UK Department of Art in the UK College of Fine Arts, the Tuska Center for Contemporary Art is on the first floor of the UK Fine Arts Building, located on Rose Street. The gallery, named for late UK faculty member and artist John Regis Tuska, is dedicated to the exhibition of contemporary art of regional and national importance. Gallery hours for the fall 2011 semester are 2 to 6 p.m. Tuesday, Wednesday and Thursday.

For more information on "Wall of Memories," contact Dmitry Strakovsky, director of the Tuska Center for Contemporary Art, at (859) 257-1545 or dmitry.strakovsky@uky.edu. Information can also be found online on the gallery's Facebook page at www.facebook.com/pages/Lexington-KY/Tuska-Center-for-Contemporary-Art/95196942735 or at their website at www.uky.edu/FineArts/Art/TCCA.