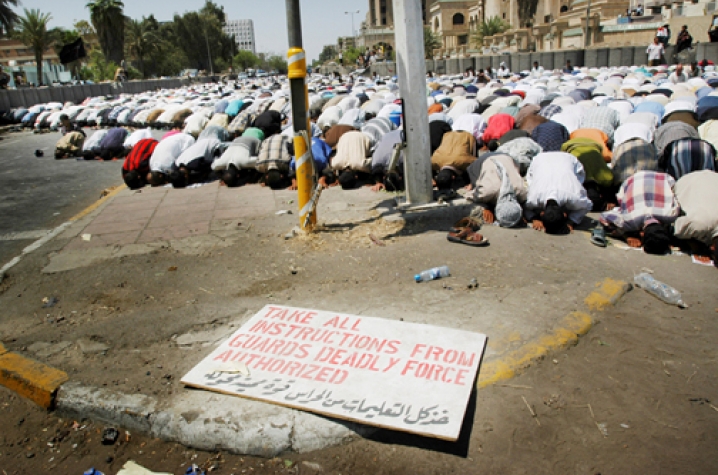 LEXINGTON, Ky. (Dec. 1, 2010) − Kael Alford, a photojournalist known for her work chronicling Iraq, continues the 2010-2011 Robert C. May Photography Endowment Lecture Series presented by the Art Museum at the University of Kentucky. Alford's free public lecture begins at 4 p.m. Friday, Dec. 3, in Worsham Theater, located in the UK Student Center. Photography by Alford is currently on display at the museum through Jan. 16. The exhibition is also free and open to the public.

Alford, a freelance photojournalist, was based in Baghdad during the U.S. invasion of Iraq in 2003. Her work from Iraq focused on the growing culture of resistance, conservative religion, and the grass roots movements developing since the invasion of Iraq. Alford lives and travels among the residents of the country she is covering and her photographs focus on the human condition in some of the most troubled regions of the world. Her most recent project, begun long before the BP oil spill, has been covering the impact of oil drilling on the ecology and economy of America’s Gulf Coast.

A recipient of the Nieman Fellowship in Journalism at Harvard University, Alford has worked extensively covering the cultures, politics and conflicts in Southeast Europe and the Middle East for many major U.S. and European magazines and newspapers. Her work, including images from the conflicts in Kosovo and Macedonia that were recognized in the Pictures of the Year competition in 2001 and 2002, has appeared in Time, Newsweek, US News, The New York Times, Times (London), The Guardian, The San Francisco Chronicle, NRC Handelsbad (Netherlands) and Vanity Fair. Additionally, Alford is one of the photographers featured in the CBC documentary "Beyond Words," that focuses on the world's top war photojournalists.

Prior to becoming a photojournalist, Alford received her master's degree from the University of Missouri-Columbia School of Journalism. She has taught photojournalism at the American University of Bulgaria. Alford currently is based in Amsterdam and New York. She is represented by Panos Pictures in London.

The May Lecture Series explores photography's roots in the 19th century and its reinvention in the digital world with four exciting artists who come from different places. The lecture series is made possible through the Robert C. May Photography Endowment, a museum fund established in 1994 for the support of acquisitions and programs relating to photography. Other photographers coming to Lexington as part of this year's series are Abelardo Morell and France Scully Osterman.

For more information on the Kael Alford lecture or on the 2010-2011 Robert C. May Photography Endowment Lecture Series, contact the Art Museum at the University of Kentucky at (859) 257-5716 or visit www.uky.edu/ArtMuseum.