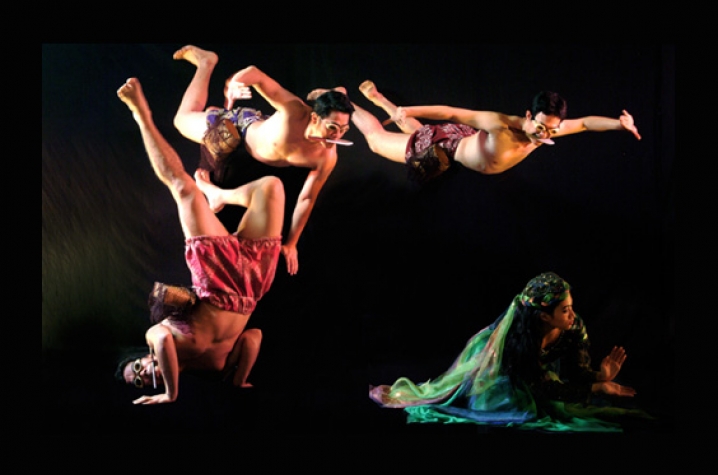 LEXINGTON, Ky. (Oct. 21, 2010) − The multi-award-winning company Bayanihan has awakened a new pride among Filipinos in their cultural heritage, preserved and added a new dimension to the country's dance tradition, and has built for the country a rich reserve of international goodwill. Bayanihan will bring its colorful show to the University of Kentucky Singletary Center for the Arts on 7:30 p.m. Thursday, Oct. 28.

The Bayanihan story spans 43 years of performances all over the world. The troupe's early roots came to life as part of the Filipiniana Folk Music and Dance Committee of the Philippine Women's University (PWU). It was not until 1957, that the PWU Bayanihan Folk Arts Center and its performing arm, the Bayanihan Philippine Dance Company were founded by Helena Z. Benitez to pursue the following objectives: conduct researches in ethnic rites, tribal folklore and regional folk ways; collect indigenous art forms as expressed in music, dance, literature, arts and crafts; distill and transform these cultural traditions into theatrical presentations; and promote international understanding through cultural exchange and performances abroad.

The company takes its name from the ancient Filipino tradition of Bayanihan, which signifies working together for the common good. It is this spirit of togetherness that bonded parents, teachers, researchers, technicians, dancers and musicians, working as one in a common effort to achieve the objectives of the company.

As a civic response to a government appeal for a cultural program for the country's participation in the 1958 Brussels World's Fair, Bayanihan mounted a production called "Glimpses of Philippine Culture through Music and Dance." The piece proved to be a hit and was featured on Ed Sullivan's TV program as a highlight of the fair.

The first Filipino group to perform on Broadway, Bayanihan also has the distinction of being the first non-American dance company to take to the stage at New York's Lincoln Center for the Performing Arts, as well as the first Philippine cultural group to perform in Russia, the People's Republic of China and throughout South America. As official Philippine representatives at the first CIOFF World Folkloriada held in the Netherlands in 1996, Bayanihan was one of the top five performing arts groups chosen from among 70 national groups to give repeat performances at the close of the festival. In 1998, Bayanihan embarked on a centennial tour of Europe commencing at the Lisboa World Expo, followed by performances in Monaco, Germany, France, Madrid and in 16 cities of the autonomous region of Galicia in Northwestern Spain.

Perhaps the most rewarding among its achievements is the fact that Bayanihan's example has encouraged the growth of numerous folk dance companies in the country, some of which have been organized by former Bayanihan dancers.

Tickets for the Bayanihan production range from $20 to $30 and can be purchased by calling the Singletary Center ticket office at (859) 257-4929, visiting online at www.singletarytickets.com, or in person at the venue. Processing fees will be added to the total upon completion of the transaction.