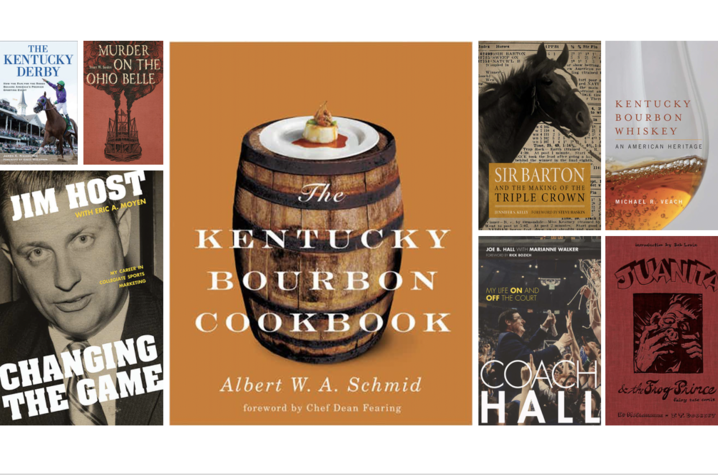 These books are for Kentucky fans, bourbon lovers, aspiring cooks, Derby fanatics and book connoisseurs alike. With such a broad selection, there is sure to be a book that catches your eye.

LEXINGTON, Ky. (April 6, 2020) — Already running out of things to do while social distancing? If you’re looking for ways to entertain yourself while stuck at home, now is the time to check out the variety of releases published by the University Press of Kentucky.

While the University Press of Kentucky is known as the scholarly publisher for the Commonwealth, they also have many books for Kentucky fans, bourbon lovers, aspiring cooks, Derby fanatics and book connoisseurs alike. With such a broad selection, there is sure to be a book that catches your eye.

For those keeping the March Madness spirit alive, UPK offers two titles highlighting the innovators and renowned leaders of UK’s sports history. “Changing the Game: My Career in Collegiate Sports Marketing” and “Coach Hall: My Life On and Off the Court” explore the lives of two former UK athletes and their careers in athletics.

In “Changing the Game,” by Jim Host with Eric A. Moyen, Host, a former student and baseball player at the University of Kentucky, details his achievements in sports radio, management and broadcasting. A pioneer in collegiate sports marketing, Host is the founder and CEO of Host Communications, which ran the NCAA radio network for more than a quarter of a century. This memoir is Host’s first complete account of his professional life, including his time in minor league baseball, real estate, politics and the insurance industry.

“Coach Hall,” written by Joe B. Hall with Marianne Walker, illuminates the athletic and coaching career of Hall, one of only three men to both play on an NCAA Championship team (1949) and coach an NCAA Championship team (1978) and the only one to do it for the same school (Kentucky). After 13 years as UK Men’s Basketball’s head coach, Hall reveals never-before-heard stories about memorable players, coaches, and friends and expresses the joys and fulfillments of his rewarding life and career.

Among other featured titles are exciting new releases for any reader. For those interested in fictional comics and graphic novels, “Juanita and the Frog Prince: Fairy Tale Comix” is the perfect mix of fiction and visual illustrations. Historical thriller “Murder on the Ohio Belle” will transport readers 164 years in the past to the mysterious circumstances surrounding a steamboat murder on the Mississippi River.

“Juanita and the Frog Prince,” by alumnus and former faculty member Ed McClanahan and illustrated by J.T. Dockery, presents an outrageous tale adapted from McClanahan’s novella of the same name. Set in 1940s Kentucky, Juanita and Luther’s story features a cast of characters trying to get ahead at all costs. This southern Gothic psychedelic trip of a comic will enrapture readers until the stroke of midnight.

“Murder on the Ohio Belle,” by Stuart W. Sanders begins in March of 1856, when the body of a rich steamboat passenger, bound to a chair, washed ashore along the Mississippi River. This historical thriller uncovers the mysterious circumstances behind the bloodshed by drawing on eyewitness accounts. Sanders uncovers the history behind this story, revealing double murders, secret identities and hasty getaways. He unveils the bloody roots of antebellum honor culture, classism and vigilante justice.

For those with extra time to experiment in the kitchen or who are interested in learning about Kentucky’s history with bourbon, there are two releases from UPK to check out. “The Kentucky Bourbon Cookbook” and “Kentucky Bourbon Whiskey: An American Heritage” are perfect for readers who have the time to drink, cook with or learn more about the beverage.

In “The Kentucky Bourbon Cookbook,” Albert W.A. Schmid guides readers through a variety of bourbon dishes with recipes and color photographs. Bourbon, a beverage distilled almost exclusively in Kentucky, has attained prominence and appreciation for its complexity, history and tradition. From classic Kentucky cocktails such as the mint julep, to bourbon inspired desserts, such as bourbon-pecan crème brulée with chocolate sauce, and more savory fare, such as steaks with bourbon ginger sauce, Schmid provides readers with the best recipes using the famous spirit of the Bluegrass.

“Kentucky Bourbon Whiskey,” written by Michael R. Veach, explores the true story of bourbon, including the technology behind its production, the effects of the Pure Food and Drug Act and how Prohibition contributed to the Great Depression. Beginning with the Whiskey Rebellion of the 1790s, Veach traces the history of this unique beverage through the Industrial Revolution, the Civil War, Prohibition, the Great Depression to the present day. While the true origin of the spirit may never be known, Veach proposes his own theory.

Despite the Kentucky Derby being postponed, racing fans can keep the spirit alive with “Sir Barton and the Making of the Triple Crown” and “The Kentucky Derby: How the Run for the Roses Became America’s Premier Sporting Event.” These UPK releases will have readers eagerly awaiting the high-stakes event until visitors flock to Churchill Downs in September.

In “Sir Barton and the Making of the Triple Crown,” author Jennifer S. Kelly brings to life the first book ever to focus on Sir Barton, his career and his historic impact on the racing industry. Destined to be a champion from birth, Sir Barton’s triumphs and defeats inspired the ultimate chase for greatness in American horse racing. Rising to an elite group, including Citation, Secretariat and American Pharoah, the legacy of Sir Barton and his seminal contributions to thoroughbred racing one hundred years after his pioneering achievement are revealed in this book.

“The Kentucky Derby” by alumnus James C. Nicholson details the event’s rise from humble beginnings to a world-renowned sporting event. A connection between Kentucky’s mystic past and modern society, the annual event confirms Kentucky’s place as the Horse Capital of the World. For 130 years, spectators have been fascinated by the magnificent horses that run the Louisville track as Nicholson argues that no American sporting event can claim the history, tradition or pageantry that the Kentucky Derby holds.

To view a full list of publications and order yours, visit www.kentuckypress.com.