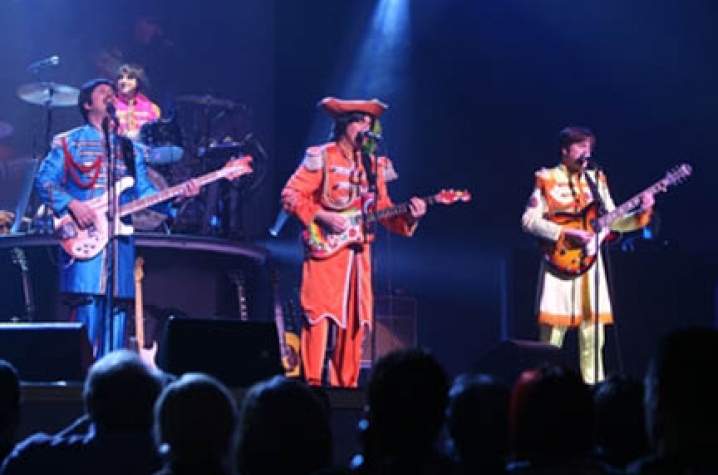 LEXINGTON, KY (Sept. 28, 2009)  - The award-winning Beatles concert, "RAIN – A Tribute To The Beatles," makes its debut at the University of Kentucky Singletary Center for the Arts, 7 p.m. Sunday, Oct. 4. In a show the Denver Post calls "the next best thing to seeing The Beatles," "RAIN" boasts a repertoire of nearly 200 Beatlemaniac favorites, ranging from such beloved songs as "Yesterday" and "Hey Jude" to classic hits including "Revolution" and "Come Together."

"RAIN " covers the Fab Four from their very first "Ed Sullivan Show" appearance through the "Abbey Road" album, through the psychedelic late '60s and their long-haired hippie, hard-rocking rooftop days. "RAIN" is a multi-media, multi-dimensional experience...a fusion of historical footage and hilarious television commercials from the 1960s lights up video screens and live cameras zoom in for close-ups.

For the four longtime band members – Joey Curatolo (Paul McCartney), Joe Bithorn (George Harrison), Ralph Castelli (Ringo Starr) and Steve Landes (John Lennon), with a little help from their friend Mark Lewis (keyboards, percussion) – the music is first and foremost. For more than two decades, "RAIN" has distinguished itself by focusing on details, always being faithful to The Beatles with the ultimate goal of delivering a perfect note-for-note performance. All the music is performed live, with no pre-recorded tapes or sequences.

Like The Beatles, the onstage members of "RAIN" are not only supreme musicians, but electrifying performers in their own right.

Tickets for "RAIN - A Tribute To The Beatles" range from $47.50 to $31.50 depending on seat location. A processing fee will be added upon completion of transaction. Group and student rates are also available at a discount. To purchase tickets, contact the Singletary Center Ticket Office at (859) 257-4929 or visit online at www.singletarytickets.com.