Watch a video about Decoda above.

LEXINGTON, Ky. (Nov. 8, 2019) — Decoda, the affiliate ensemble of Carnegie Hall including University of Kentucky’s own ToniMarie Marchioni, will visit the university for a series of workshops and a concert Nov. 10-13.

The concert, which is free and open to the public, will include music for one, two, three and four instruments interwoven in a musical narrative beginning 7:30 p.m. Tuesday, Nov. 12, at the Singletary Center for the Arts Recital Hall. Inspired by motion and counterpoint in music, the concert will include works by Johann Bach, Béla Bartok, Leoš Janacek, Bohuslav Martinu and more.

Decoda was founded in 2012 by alumni of Ensemble Connect, a two-year fellowship program of Carnegie Hall, The Juilliard School and the Weill Institute in partnership with the New York City Department of Education. As the affiliate ensemble of Carnegie Hall, the group's activities are anchored in creating compelling performances.

At home in New York City, Decoda works with partner organizations such as WQXR, the Police Athletic League, NYPD and NYC Administration for Children’s Services to engage a diverse cross-section of the city through creative songwriting workshops and interactive performances that promote collaboration and compassion. Decoda’s versatile artists are dedicated to creating dynamic performances and opportunities for musical discovery.

Catherine Gregory, an Australian flutist, has performed at The Kennedy Center, Alice Tully Hall, Los Angeles County Museum of Art, the Barbican Centre in London and at the Lincoln Center Festival. She will make her recital debut at Carnegie Hall this fall. Gregory is passionate about connecting all communities through music. Her upcoming project, Just Breathe, provides interactive performances for cancer patients to provoke, stimulate and harness their creative expression throughout their treatment journey.

Oboist, ToniMarie Marchioni, has performed in Europe, South America, Asia and throughout the U.S. as a soloist, chamber musician and orchestral player. Currently an assistant professor of oboe at UK School of Music, Marchioni is a frequent performer at the International Double Reed Society conferences and a sought-after clinician and pedagogue.

Shelley Monroe Huang is a bassoonist with Decoda and a past bassoon fellow at Carnegie Hall’s Ensemble Connect. As a teaching artist, Huang performs in schools, universities and community venues. She leads songwriting projects, teaches students to play the recorder and works with Carnegie Hall on The Lullaby Project, a program where new parents write lullabies for their babies. As a concert bassoonist and contrabassoonist, Huang has performed with Orpheus Chamber Orchestra, American Composers Orchestra and the Charlotte, Albany, New Haven and Princeton symphony orchestras.

While on campus, Decoda will also host three workshops. Details for the free public workshops are:

In addition, Decoda will present at three of UK's arts administration classes and give interactive performances at Kentucky Children's Hospital and Lexington's School for the Creative and Performing Arts on Nov. 13. 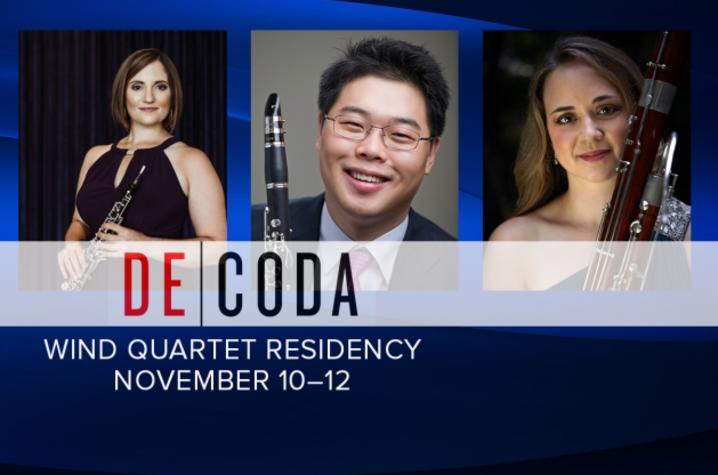 An affiliate ensemble of Carnegie Hall, Decoda will present three workshops and a concert at UK Nov. 10-12.