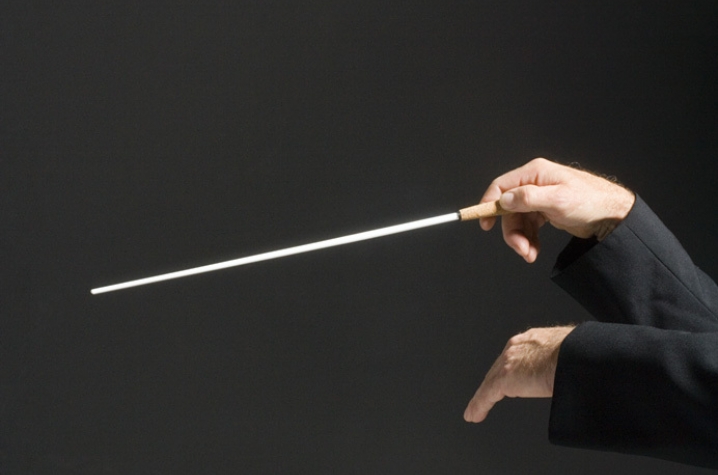 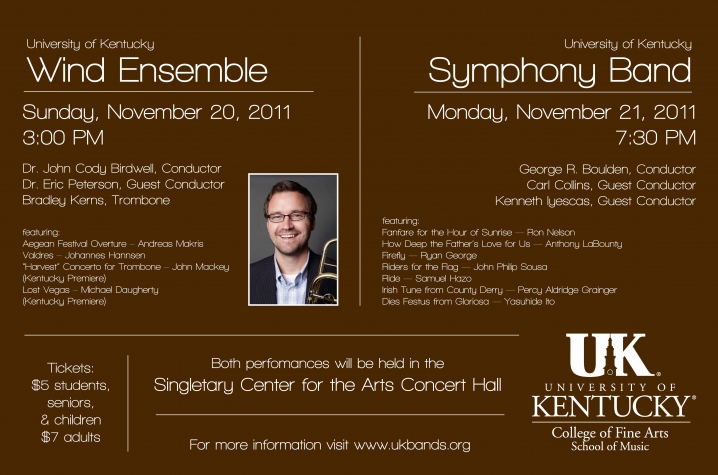 LEXINGTON, Ky. (Nov. 18, 2011) − University of Kentucky Bands will present two concerts in the coming week featuring UK Wind Ensemble and UK Symphony Band. UK Wind Ensemble is first up with guest conductor Eric Peterson, director of bands at South Dakota State University, in concert on Nov. 20. The following evening, UK Symphony Band will present a preview concert of their program for the upcoming Kentucky Music Educators Association (KMEA) Conference. Both concerts will be presented at the Singletary Center for the Arts Concert Hall.

As director of bands and an assistant professor of music at South Dakota State University, Eric Peterson's duties include the administration of the South Dakota State Band program, the All-State Summer Band Camp, coordinating recruiting efforts for the wind, brass and percussion areas, teaching applied tuba lessons, undergraduate conducting, co-chair of the Music Scholarship Committee, assisting with the famed “Pride of the Dakotas” Marching Band, and conducting the Symphonic Band.

Trombonist Bradley Kerns will be the concert's featured soloist on the Kentucky premiere of John Mackey’s “Harvest: Concerto for Trombone" written for Joe Alessi. The Grammy nominated artist joined the faculty at UK School of Music in the spring of 2011. The UK Wind Ensemble concert program will also include the Kentucky premiere of "Lost Vegas" by Michael Daugherty, the Norwegian Valdres March by Johannes Hannsen, and the Aegean Festival Overture by Andreas Makris.

The UK Wind Ensemble, under the direction of John Cody Birdwell, is made up of the finest wind and percussion performers in the UK School of Music. The ensemble continues a tradition of professional-level performances to audiences throughout the state and beyond. In the summer of 2008, the UK Wind Ensemble participated in a 10-day concert tour of the People's Republic of China. The ensemble has also released several commercially published recordings and has been invited to perform at national and regional conferences for the College Band Directors National Association, and for the KMEA Conference.

The UK Symphony Band concert will feature two guest conductors from UK School of Music in a preview concert of their upcoming performance at the KMEA Conference to be held in February 2012, in Louisville. Carl Collins, assistant director of UK Bands, and Kenneth Iyescas, conducting doctoral candidate and UK Bands graduate assistant, will join the UK Symphony Band in concert at 7:30 p.m. Monday, Nov. 21.

The concert program for the UK Symphony Band will include performances of "Firefly" by composer and UK alumnus Ryan George, as well as other works by Ron Nelson, Percy Grainger, Sam Hazo, John Philip Sousa, Anthony Labounty and Yasuhide Ito.

UK Symphony Band, under the direction of George Boulden, is comprised of both music majors and talented musicians from other majors. The ensemble has been featured at the 2003 and 2008 KMEA Conferences and the 2005 Southern Division MENC/Florida Music Educators Association Conference in Tampa, Fla.

UK's band program is generally regarded as one of the finest complete university band programs in the U.S. UK Bands include the UK Wind Ensemble, Symphony Band and Concert Band, as well as the Wildcat Marching Band, UK Basketball Pep Band and several other performance ensembles in the UK School of Music at the UK College of Fine Arts.

Tickets to both the UK Wind Ensemble and UK Symphony Band concerts are $7 for general admission and $5 for students, children and senior citizens. Tickets to the concerts can be purchased at the Singletary Center ticket office by calling (859) 257-4929, visiting online at www.singletarytickets.com, or in person at the venue.