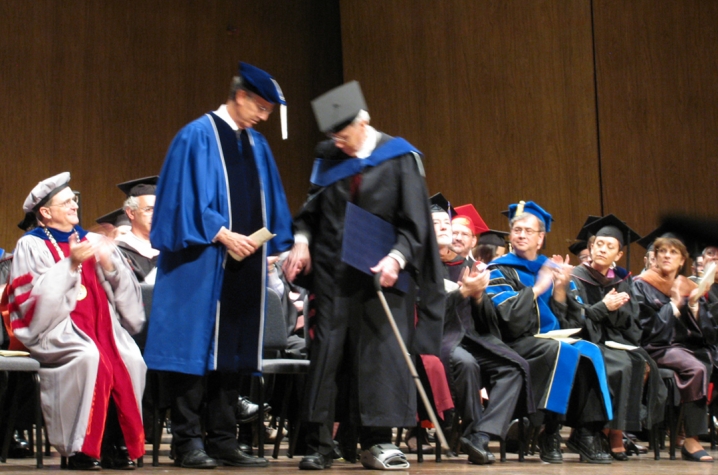 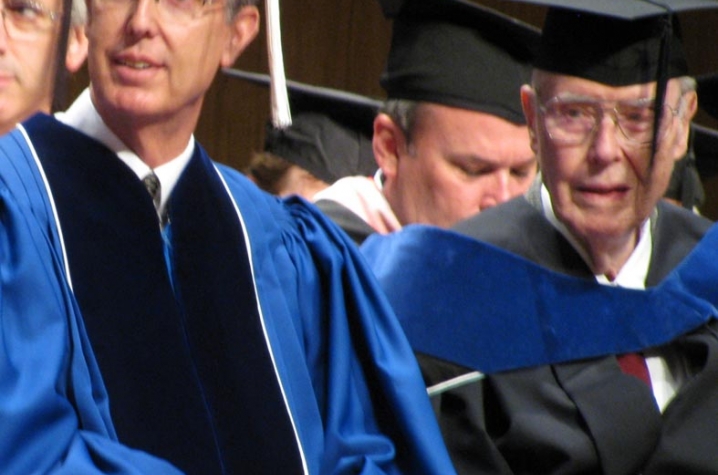 LEXINGTON, Ky. (May 14, 2010) − The University of Kentucky College of Fine Arts recognized a father and son for their contributions to the arts at the College of Fine Arts Recognition Ceremony held May 8, at the Singletary Center for the Arts. Gordon Henderson, director of the University of California, Los Angeles (UCLA) Bruin Marching Band and Varsity Band, was presented with the Distinguished Alumni Award, and his father Hugh Henderson, a former chair of the UK School of Music, was presented with the college's Community Service Award.

Gordon Henderson is the 2010 recipient of the College of Fine Arts Distinguished Alumni Award. First presented in 1995, the award is given each year to one alumnus who has achieved distinction in his or her field.

Gordon is associate director of bands and vice chair of the UCLA Department of Music. He directs the 250-member Bruin Marching Band, and the basketball pep band known as the Varsity Band. Under Gordon's direction, the Bruin Marching Band has appeared at 14 bowl games and four NCAA Basketball Tournament Final Fours. In 1993, the UCLA Bruin Marching Band received the prestigious Sudler Trophy, presented by the John Philip Sousa Foundation to recognize excellence and innovation. International travel for groups of Bruin Marching Band members has included trips to Tokyo in 1988 to celebrate the 25th anniversary of the first bullet train line, and the Chinese New Year Night Parade in Hong Kong in 2006 and 2008, as well as a trip this May for 14 members of the UCLA Drumline to Nagoya, Japan, as featured performers at the 28th Annual Ekitopia Festival.

Gordon received his bachelor's and master's degrees in music education from UK in 1975 and 1977. He served as assistant director of UK Bands for five years before becoming the director of the Bruin Marching Band at UCLA in 1982.

From 1989 to 1995, Gordon directed the Jazz Ensemble I, performing with numerous guest artists. Under his direction, both the ensemble and the Jazz Combo won their respective divisions at the 1995 Reno International Jazz Festival.

Gordon has also served as head horn instructor or brass arranger for three Drum Corps International Champions: the Santa Clara Vanguard in 1989 and 1999, and the 1992 Cavaliers from Rosemont, Ill. In 2008, he served as program coordinator for the Troopers Drum and Bugle Corps from Casper, Wyo. Through the years, Gordon has also worked with the Imperial Guard, the Pride of Cincinnati, the Guardsmen, the Cadets, the Capital Regiment, Pacific Crest and the Academy.

Since 1990, Gordon has been the arranger for the Tenrikyo Aimachi Marching Band in Nagoya, Japan, the seven-time All-Japan National Champions. In 2009, he served as an adjudicator for the World Music Contest held in Kerkrade, the Netherlands, where he judged more than 80 bands, drum corps and concert percussion ensembles from 14 countries spanning four continents.

Gordon was an assistant director and drill designer for the 736-member Olympic All-American College Marching Band that performed at the opening ceremonies of the 1984 Los Angeles Summer Olympics. He has composed and/or arranged band music for several major motion pictures including "In the Line of Fire," "Little Nikita," "Legends of the Fall," "The Waterboy" and "Click." Gordon is active as an arranger, guest conductor, adjudicator, drill designer and clinician throughout the U.S., Canada, Japan, Taiwan and Thailand.

Gordon's father, Hugh Henderson, was presented the 2010 College of Fine Arts Community Service Award. This award is presented annually to an individual associated with UK who has contributed significantly to the fine arts and the public.

Hugh Henderson, a musicologist and trumpeter, earned his doctorate from the University of North Carolina at Chapel Hill, where he also served as an instructor from 1946-1951. After completing his doctorate, he served in the U.S. Air Force for two years, before becoming the director of bands at Montana State University in 1954. He would also serve the faculty of the University of Maryland, College Park before joining UK's faculty in 1965.

During his time at UK from 1965 to 1989, Hugh served the UK School of Music as a professor of music history and chair. He also was director of Office of Fine Arts Extension overseeing summer workshops and institutes at UK, as well as a string extension program. Additionally, Hugh was responsible for the Summer Sounds Series and was coordinator of University Artist Series for many years.

Hugh was also previously active as an editor of the American Bandmasters Association Journal of Band Research and the American Musicological Society Newsletter.