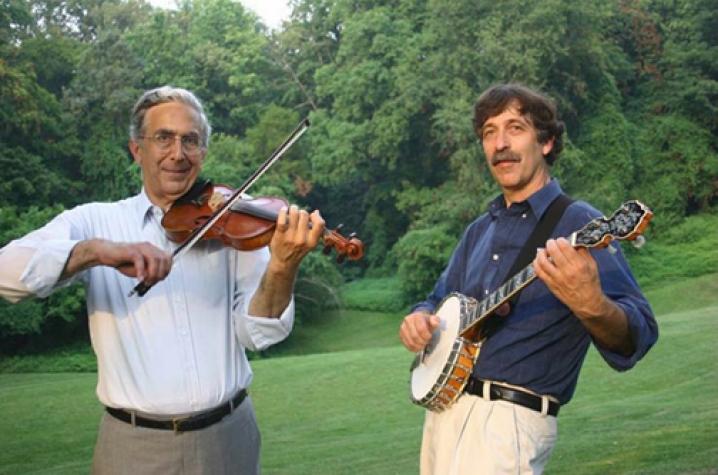 LEXINGTON, Ky. (Oct. 25, 2010) − The University of Kentucky John Jacob Niles Center for American Music welcomes fiddle-banjo ensemble Alan Jabbour and Ken Perlman to campus to perform as part of the concert series "Appalachia in the Bluegrass." The concert, which is free and open to the public, is scheduled for noon, Wednesday, Oct. 27, in the Niles Gallery, located in the Lucille C. Little Fine Arts Library and Learning Center. The concert is the first of two offered this week by the Niles Center, who will also welcome Ada and Jimmy McCown to campus on Oct. 29.

Fiddler Alan Jabbour, a Jacksonville, Fla. native, began his musical career as a violinist. After graduating from the University of Miami, Jabbour attended Duke University as a graduate student where he began documenting old time fiddlers in the upper South. Documentation turned into apprenticeship as he relearned the fiddle from the area's musicians, including Henry Reed of Glen Lyn, Va., and Tommy Jarrel of Toast, N.C.

After earning his doctorate in 1968, Jabbour taught English, folklore and ethnomusicology at the University of California, Los Angeles from 1968 to 1969. He then moved to Washington, D.C., where he worked for more than 30 years with federal cultural agencies. Jabbour's past positions include: head of the archive of folk song at the Library of Congress from 1969 to 1974; director of the folk arts program at the National Endowment for the Arts from 1974 to 1976; and director for the American Folklife Center at the Library of Congress from 1976 to 1999.

Award winning folklorist Ken Perlman is both a pioneer of the five-string banjo style "melodic clawhammer" and a master of the fingerstyle guitar. Recognized as one of the best clawhammer players in the world, Perlman is predominantly known for his adoptions of Celtic tunes to the clawhammer style.

Perlman draws his material from the music of Scotland, Ireland, Cape Breton, Prince Edward Island and the American South. From this music, he develops new instrumental techniques never before played on the five-string banjo or guitar. As an active folklorist, Perlman has spent more than a decade collecting tunes and oral histories from traditional fiddle players on Prince Edward Island.

An acclaimed teacher of folk music and instrumental skills, Perlman has written some of the most widely respected banjo and guitar instruction books of modern times. He has been on staff at prestigious teaching festivals around the world and served as director and co-director for several banjo and musical instruction camps.

Jabbour and Perlman have been making music together since they met working as instructors at Rocky Mountain Fiddle Camp in Colorado. The duo remains humble and grateful to the past generations of fiddlers from whom they learned their songs. Aside from touring and performing concerts, the two have also released the recent CD "Southern Summits."

To watch a video of Perlman and Jabbour performing together, visit YouTube online at www.youtube.com/watch?v=3-BEvSa9Y3U.

The "Appalachia in the Bluegrass" concert series celebrates the old time roots of American Folk music by featuring a diverse range of traditional musical expression. Hosted by the Niles Center, the concert series illustrates the many faces of the Bluegrass' indigenous American Folk music, from the authentic old time sound of mountain banjo player Lee Boy Sexton to the blues-infused style of Sparky and Rhonda Rucker. The Niles Center is a collaborative effort of the UK School of Music, UK College of Fine Arts and UK Libraries.

This year's series is made possible with support from the Office of the Provost, the Niles Center and the Appalachian Studies Program.

For more information on the Alan Jabbour and Ken Perlman concert or the "Appalachia in the Bluegrass" concert series, contact Ron Pen, director of the Niles Center by e-mail to Ron.Pen@uky.edu or visit online at www.uky.edu/FineArts/Music/Niles