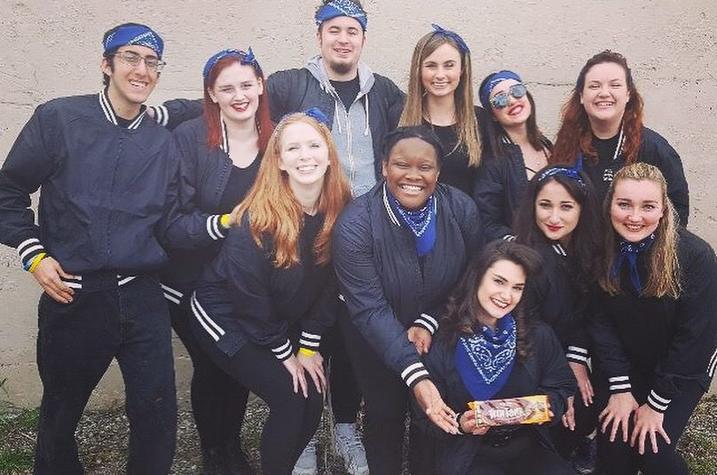 LEXINGTON, Ky. (Feb. 16, 2018) — The University of Kentucky Department of Theatre and Dance celebrates its 50th anniversary season with a new, award-winning improvisation troupe. Fresh off a strong regional competition performance, the Skitty Kitties will perform 5 p.m. Tuesday, Feb. 20, in the Briggs Theatre, located in the Fine Arts Building. The performance is free and open to the public.

"Deb Pushes the Cart" creates a story using elements from VH1’s “Behind the Music,” the traditional long-form improvisation technique "Harold," and additional musical improv games. Skitty Kitties is the first troupe to ever perform the new variant.

In its first-ever competition, UK's troupe earned a silver in its preliminary round and ranked fifth out of all competing teams. The team was the youngest by at least 10 years; one of its competitors, University of Florida, boasts a 30-year improv history at the university. The College Improv Tournament judges were highly impressed with the team cohesion and its use of a new improv format.

The UK Department of Theatre and Dance at UK College of Fine Arts has played an active role in the performance scene in Central Kentucky for more than 100 years and is currently celebrating 50 years of offering theatre as an educational program of study. Students in the program get hands-on training and one-on-one mentorship from the renowned professional theatre faculty. The liberal arts focus of their bachelor's degree program is coupled with ongoing career counseling to ensure a successful transition from campus to professional life.