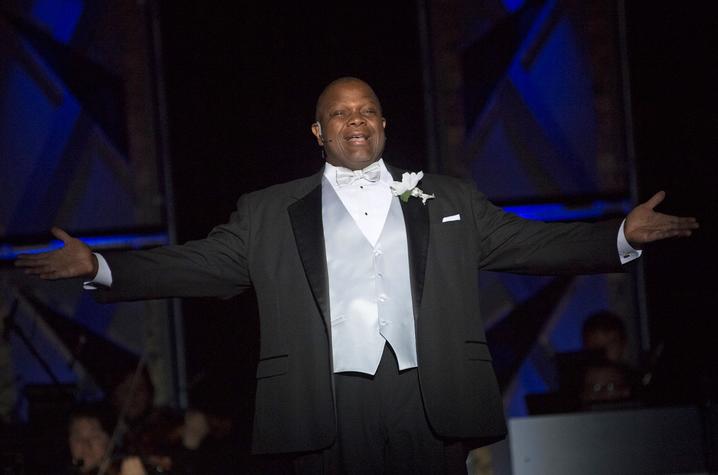 Everett McCorvey performs at the 2017 "It's a Grand Night for Singing!" program. The popular annual event will return to the Singletary Center stage this June.

LEXINGTON, Ky. (May 7, 2018) — On May 8, University of Kentucky Libraries will recognize the 2018 recipient of the UK Libraries Medallion for Intellectual Achievement, Everett McCorvey. The nationally recognized opera educator, vocalist and conductor will be presented with his medallion at the UK Libraries Spring Gala, at William T. Young Library.

“It is an honor for UK Libraries to recognize the positive impact Everett McCorvey is making in Kentucky and around the world,” said Interim Dean of UK Libraries Deirdre Scaggs when asked about this year’s medallion winner. “McCorvey is fulfilling his mission of making better citizens of our community and is an inspiration. As a society, we need the arts, and I am thrilled we are celebrating McCorvey’s impact as a teacher and a performer through opera.”

The UK Libraries Medallion for Intellectual Achievement is one of UK's most prestigious awards. It was created in 1990 to recognize high intellectual achievement by a Kentuckian who has made a contribution of lasting value to the Commonwealth. The award also promotes education and creative thought. The recipient is determined by the UK Libraries National Advisory Board after receiving nominations from the public. Past recipients of the honor include: John Anthony, Wendell Berry, James Still, Bobbie Ann Mason, Thomas D. Clark, Laman A. Gray Jr., Guy Davenport, George C. Herring, Adalin Wichman, John Egerton, Karl Raitz, George Wright, James C. Klotter and Dr. F. Douglas Scutchfield.

A native of Montgomery, Alabama, McCorvey received his bachelor’s, master’s and doctoral degrees from the University of Alabama, where he studied with voice teacher Edward White. He has also studied Italian at Centro Linguistico Sperimentale, in Florence, Italy, and French diction at the Juilliard School in New York City.

McCorvey joined the UK School of Music faculty in 1991. He has been credited for the program’s rise to national prominence over the last 27 years, which includes two UK winners of the Metropolitan Opera National Council Auditions. Since 1997, he has been the director and executive producer for UK Opera Theatre. Later, he was awarded the OperaLex Endowed Chair in Opera Studies.

McCorvey has performed all over the world, in such venues as the Kennedy Center, the Metropolitan Opera, Radio City Music Hall and Queen Elizabeth Hall in London, England, as well as stages in Austria, Brazil, China, the Czech and Slovac Republics, Hungary, Ireland, Japan, Poland, Portugal and Spain. As a tenor soloist, McCorvey has worked with conductors from around the world including maestros James Levine of the Metropolitan Opera, Zubin Mehta, Joseph Flummerfelt, Kirk Trevor and Julius Williams, to name a few. His operatic roles include Don Jose in “Carmen,” Don Ottavio in “Don Giovanni,” Fenton in “Falstaff” and Puck in “La Grande Duchess de Gerolstein,” among others.

With his wife, soprano Alicia Helm, McCorvey has also given concerts, masterclasses and workshops throughout the United States, Europe, South America and Asia.

Locally, many Kentuckians will remember McCorvey’s work as the executive producer for the opening and closing ceremonies of the 2010 Alltech FEI World Equestrian Games, the largest equestrian event in the history of the United States.

McCorvey is also the founder and music director of the American Spiritual Ensemble, a group of 24 professional singers performing spirituals and other compositions of African-American composers. The mission of the group is to preserve the American Negro spiritual. The group has traveled worldwide including 16 tours of Spain, as well as concerts in Brazil, France, Ireland, Ecuador and other counties. The American Spiritual Ensemble has been featured on several PBS (Public Broadcasting Service) specials, which have been broadcast nationally. The most recent was filmed by KET (Kentucky Educational Television) in 2017 and broadcast throughout the United States.

Born and raised in Alabama, McCorvey lived around the corner from Martin Luther King Jr. His father is still a deacon at First Baptist Church in Montgomery, the church where the Rev. Ralph Abernathy, King’s assistant, was minister. In the third grade, McCorvey started taking trumpet lessons. By high school he had switched to baritone horn. When he started his studies at the University of Alabama, he auditioned on the baritone horn for Bill Stevens, who was a voice teacher for Jim Nabors. It was Stevens who suggested McCorvey consider singing as his musical instrument of choice.

McCorvey serves as vice-chair of the Kentucky Arts Council for the Commonwealth of Kentucky. He and his wife have three children, all born in Kentucky — Elizabeth, Julia and David.

In addition to celebrating McCorvey's life and work, the UK Libraries Spring Gala will also include recognition of the recipient of the 2018 Paul A. Willis Outstanding Faculty Award and the Dean’s Award for Excellence in Undergraduate Scholarship.