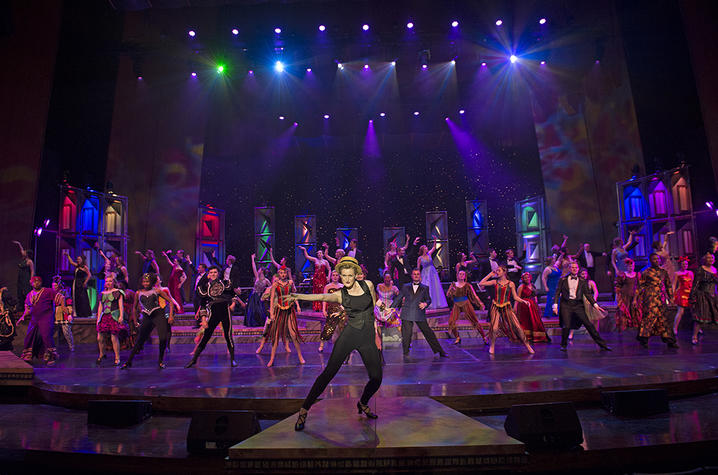 UK alumna Ruthie Sangster leads a performance during the 2019 "It's a Grand Night for Singing!" UK Opera Theatre will celebrate the 30th anniversary of its singalong spectacular beginning this Friday, June 10. Photo by Philip Groshong.

LEXINGTON, Ky. (June 7, 2022) — For 30 years, the University of Kentucky Opera Theatre has been dazzling summertime audiences with its Emmy Award-winning singalong spectacular, “It’s a Grand Night for Singing!”

In 1993, the UK School of Music’s opera program debuted the summer show to showcase the talent of its students and create a platform for students to practice the musical theatre songbook. Over the years, the intimate musical revue has grown into a major production, with more than 100 performers, a full orchestra, sets and costumes to rival professional companies. The show also represents an important partnership between the university and the Lexington community, bringing students and local artists together to share the limelight.

UK Opera Theatre Director and Executive Producer Everett McCorvey has led the program (and performed in it) since its inception. He says he originally started the program to give his students professional experience.

“I wanted to create a program that gave our students the experience of working not only in classical music but also in Broadway,” McCorvey said. “The reality for performers living in New York is that the more versatile you are, the more you have the opportunity to work. I wanted our students from UK to not only be versatile in the classical scene, but also versatile in singing Broadway and selections from the American songbook. ‘Grand Night’ allowed me to create a format where students could have this experience as well.”

McCorvey also saw an opportunity to give the local community opportunities to participate in musical theater.

“We started adding community members and UK faculty and staff members early in the evolution of the show,” he said. “I realized very early that there were not a lot of outlets for community members to participate in musical theater. There are certainly more now, but in the 90s, there weren't that many. It has been wonderful adding that element to our production.”

While McCorvey has been with the production since 1993, several crew members have been with the show for many years as well. This includes Robert Pickering, from Chico, California, who has worked behind the scenes for over 20 years as a member of the creative team. He helped take “Grand Night’s” set design to the next level.

“In 2000, Dr. McCorvey approached me about making a sign for the production,” Pickering said. “Before 2000, a simple ‘Grand Night’ sign was hung over the center of the stage. Since then, I have worked with Singletary Center lighting designer, Tanya Harper, and her amazing crew. I think Tanya and I really understand each other’s — and the production’s — design needs. The set and lighting has grown into a multi-level visual extravaganza with a kaleidoscope of colors.”

Pickering says his involvement in “Grand Night” has been one of the highlights of his career.

“It’s a wonderful and demanding creative opportunity to work with the talent and professionalism that the UK Opera Theatre provides,” he said.

“Grand Night” has also earned many loyal fans over its 30-year history. Betty Barton, from Lexington, is one of them. She has attended 28 shows since 1993. Now at 83 years old, Barton says she keeps coming back because “it just gets better and better every year.”

“It has become a ‘must-see event’ in Lexington,” Barton said. “I have been so impressed with UK School of Music and the professors who teach there. It has become one of the nation’s premier programs for students who wish to major in this field. So many students who have graduated have gone on to very good careers, such as singing with The Metropolitan Opera and theaters on Broadway. So we know they get first rate training at UK."

“We are catching our audiences at a good time in their personal schedules — school has been out for a few weeks, the concert season has winded down and now people are ready to begin their summer season of concerts. A reviewer said a few years ago that ‘Grand Night’ was the ‘kick-off to the summer season,’ and we love that designation!”

McCorvey says this year’s production will have something for every audience member, including selections from traditional musicals, like “Oklahoma!” to newer musicals, including “Hamilton” and “MJ: The Musical.”

“I'm deeply appreciative to our audiences for trusting us for 30 years to bring a show to them for their enjoyment,” McCorvey said. “It is the ticket-buying public that keeps us going from year to year. We appreciate the public's support of our work.”

The university and local community are invited to celebrate the 30th anniversary of "Grand Night" with two weekends of performances, beginning 8 p.m. this Friday, at the Singletary Center for Arts. See the full list of dates and times below.

“It’s a Grand Night for Singing!” is a reserved seating performance in the Singletary Center Concert Hall. Tickets are $45-55 for general admission, $40-50 for seniors and $15 for students with a valid student ID. To purchase tickets, contact the Singletary Center ticket office online at www.scfatickets.com, by phone at 859-257-4929 or in person at the venue.

Valet parking will be available in the Singletary Center circle on Rose Street.

Performances dates and times include:

The highly acclaimed UK Opera Theatre program is part of the School of Music at the UK College of Fine Arts. The school has garnered a national reputation for high-caliber education in opera, choral and instrumental music performance, as well as music education, music therapy, composition, theory and music history.