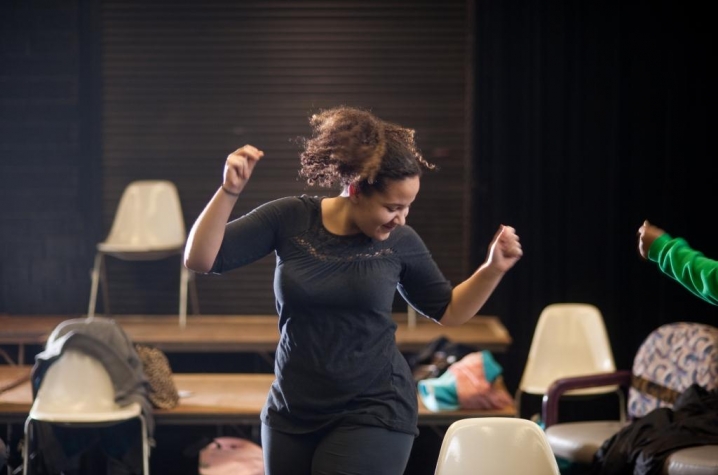 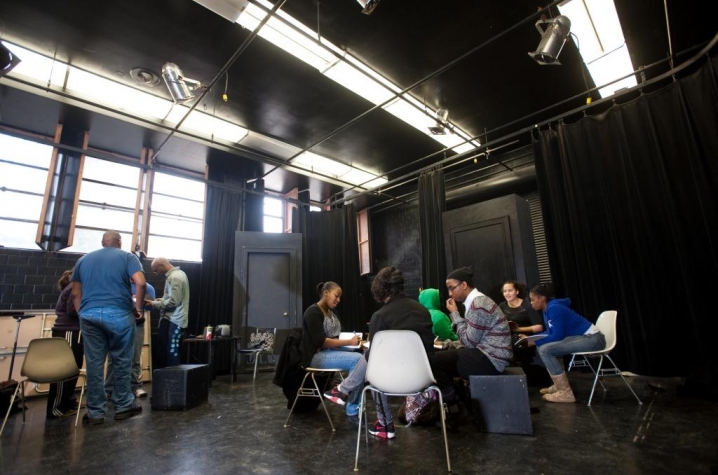 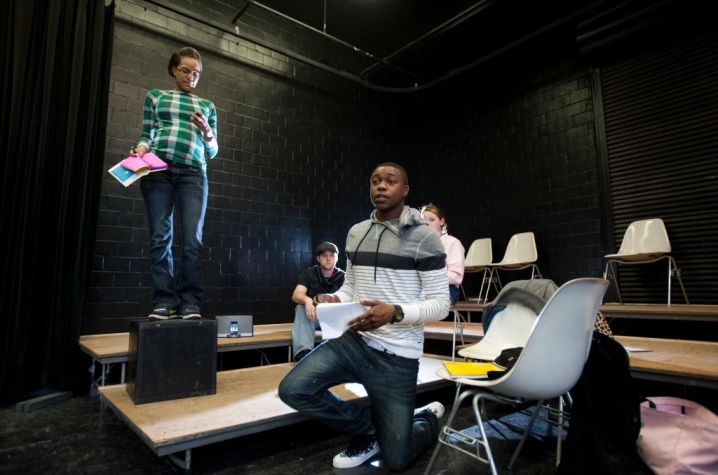 LEXINGTON, Ky. (April 15, 2011) — Playing a character before a live audience is liberating. Cloistered in class discussion, students often close their minds along with their books. Meanwhile, there are stories to be told of dreams and aspirations, of fear and retribution, of unforgotten and unimaginable experience, of gender, color and kind.

"Kentucky and South Africa: Different Lands, Common Grounds" is a College of Arts and Sciences initiative that strives to tell the stories of South Africa, in hopes that Kentuckians can also learn a bit more about themselves.

Jennifer Goodlander, an assistant professor at the UK Department of Theatre, has conducted an inquiry of her own this semester with a Black Theatre Workshop class comparing South African and African American playwrights.

Goodlander’s Black Theatre Workshop class is thick with revolutionary writers and nontraditional techniques and diversity, concepts that are foreign only geographically to a professor with specialization in Southeast Asian theater. "It's like having a whole new toolkit to use," she said. "It's liberating — with different sensibilities."

Goodlander has focused on the stories of South African and African American women throughout the class. “When you listen to women, you really get a sense of the politics and the economy of a region," she explained. "Women are usually more disenfranchised, they are raising children; you hear the heartbeat of the health of a country.”

Male domination of the South African and African American playwright spaces also played a role in her decision. “The canon of South African writers is mostly men. With women, you hear different voices and themes; the two geographic areas will make a great comparison.”

Goodlander and her students studied little known South African playwrights Fatima Dike and Ismail Mahomed (one of the only male playwrights the class will read), but also well-known African American writers such as Anna Deavere Smith and Ntozake Shange.

“All of these works throw realism out the window, playing with time and other nontraditional methods,” Goodlander explained. "I was drawn to plays focusing on identity and how we deal with ourselves. These writers deal with race, gender and opportunities.”

Goodlander gave a comprehensive review of South African and African American playwrights, but the stories of her students have been just as important to the experienced director.

"I hope that students will take ownership of their own voices," she said. “I want to capture personal, local, national and international experiences in our final performance.”

To draw out students with little to no theatre experience, Goodlander integrated well-known theatre games into the beginning of the semester. For students less accustomed to research, the class also included a study of South African culture and history.

“Students were comfortable, but also challenged,” Goodlander said. "We created performances without a set idea, looking at different types of performances and workshopping them."

The class's 12 students hail from theatre and African American Studies; they are all ages, genders and ethnicities…a melting pot of identity much like the areas they explored and the plays they read.

"I hope that the class has permitted a freer dialogue," said Goodlander. “When you play a character, you embody the feeling more. There's not a right way in theatre, because in creating art, you're attempting to express something that can't be expressed through traditional means.”

The class culminates in a live production at the Department of Theatre’s World Theatre Festival this weekend. In "Over the Rainbow," Goodlander's class and cast discover identities, explores boundaries and overcome adversity.

The class's final performance includes a collage of theatre, with a mix of formats, showcasing the creative and boundary-pushing playwrights they have studied, as well as their complicated points of view on identity.

"We'll have students taking current news events from Lexington and South Africa and creating their own pieces," she said. "I'm looking forward to learning more about my students and South African theatre, but I also want to expand the definition of theatre for my students, discussing concepts of race, theatre and identity in their minds."

Like Bettie Fourie in Mahomed's "Cheaper than Roses," Goodlander has encouraged her students to break with their own established identities and claim who they truly are. "By ripping up an identity card, Bettie creates a new definition," said Goodlander. "I'm interested in how theatre lets you learn about others. You get the chance to peek into a whole other world."

The Black Theatre Workshop will perform "Over the Rainbow" at 7 p.m. Saturday, April 16, and at 2 p.m. Sunday, April 17, at the Downtown Arts Center.

"Over the Rainbow" is one of seven shows being presented at the World Theatre Festival. For a list of all productions visit: www.uky.edu/FineArts/Theatre/current27.html.

Tickets for the World Theatre Festival are $10 per show, $20 for a festival pass or $15 for a family pass. To reserve tickets, call the Downtown Arts Center ticket office at (859) 225-0370 or visit www.ukworldtheatrefest.com. For more information on the festival, contact the UK Department of Theatre at (859) 257-3297 or uktheatre@uky.edu.

To see video of the cast working on "Over the Rainbow," watch UK freshman Zachary Norton's video at www.youtube.com/watch?v=qh3lAJVO3DQ. (WARNING: this video includes adult language)