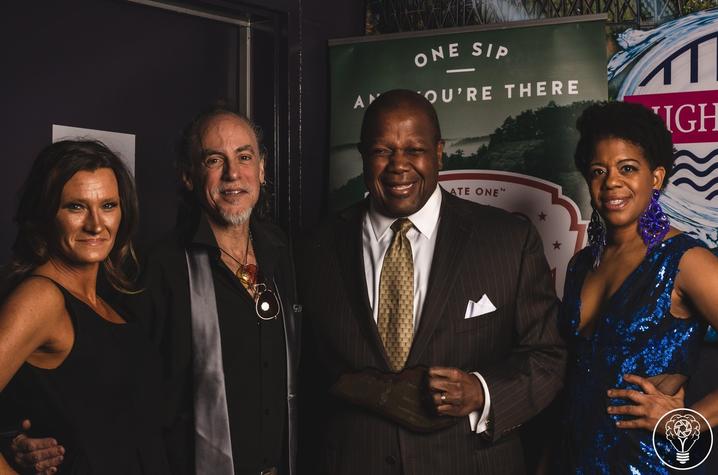 Everett McCorvey (second from right) was recognized with a Lifetime Achievement Award at the Lexington Music Awards.

Though his roots are in Montgomery, Alabama, McCorvey has been a powerhouse in the Kentucky and national arts scene for around 30 years. A professor of voice and the OperaLex Endowed Chair in Opera Studies, McCorvey serves as UK School of Music’s director and executive producer of the critically acclaimed UK Opera Theatre. Beyond UK, as a tenor soloist, he has enjoyed personal critical acclaim and has performed in many prestigious venues around the globe, including the Kennedy Center, Radio City Music Hall, the Metropolitan Opera and Italy's Teatro Communale.

McCorvey, who holds multiple degrees from University of Alabama, also established, directs, and tours nationally and internationally with the American Spiritual Ensemble and is the artistic director of the National Chorale, a professional choral organization that presents an annual choral-orchestral series at Lincoln Center in New York. Many Kentuckians will remember his work as the executive producer for the opening and closing ceremonies of the 2010 Alltech FEI World Equestrian Games, the largest equestrian event in the history of the United States. McCorvey is also vice-chair of the Kentucky Arts Council for the Commonwealth of Kentucky.

Kevin Holm-Hudson, professor of music theory, took home the Jay Flippin Music Education Award. This is his second win in this category and third overall Lexi.

Holm-Hudson, who came to UK in 2000, is the author of "Music Theory Remixed" (Oxford University Press) and "Genesis and the Lamb Lies Down on Broadway" (Ashgate), and he is editor of "Progressive Rock Reconsidered" (Routledge). His articles have appeared in Leonardo Music Journal, American Music, Music Theory Online, Musicae Scientiae, Popular Music and Society, Contemporary Music Review, Ex Tempore, Genre, and National Association of Schools of Music Proceedings. Holm-Hudson has presented his research at international conferences in Australia, Germany, Sweden, Finland, Canada, the U.S., Lithuania, England and France. He has also presented his work nationally at meetings of the Society for Music Theory, (Sonneck) Society for American Music, National Association of Schools of Music, College Music Society and the International Association for the Study of Popular Music.

In addition to McCorvey and Holm-Hudson’s honors, musicology doctoral student Elizabeth Varnado won Song of the Year for "Life Is Good" with Lexington band Ivy Rye and alumni Renee and Warren Cobb took home Best Music Company for their work as executive directors of Listen Locally, which engages and shares with arts lovers a variety of ways to listen to local talent in such artforms as music, theater and poetry.

The idea for the Lexington Music Awards came about from Lexington musician and music teacher, David McLean. He intended for the event to be a small gathering, but soon realized that there was much more interest in the event than he originally predicted. To determine the winners of each category, McLean has the public make nominations online. He then narrows down the votes to the top four candidates per category and had individual nominees vote on each category to determine the winners.

For a list of all this year’s winners visit the Lexington Music Awards online.