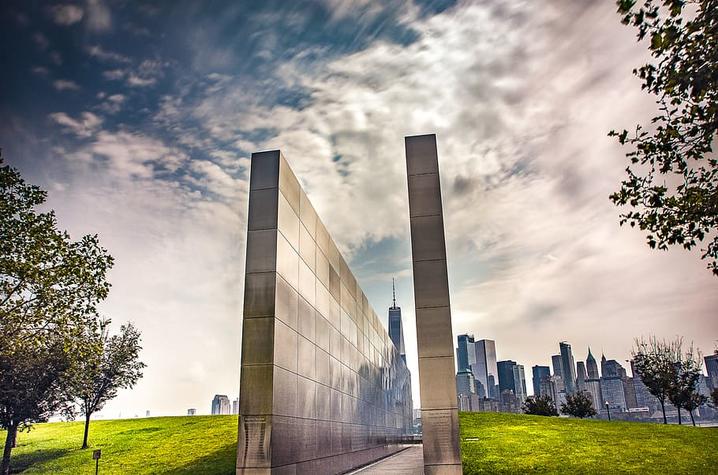 UK vocalists under the direction of Everett McCorvey will lend their talents to Empty Sky Memorial's 9/11 programming this Saturday. Photo courtesy of Piqsels.

New Jersey lost 750 people in the events of 9/11. Constructed by the New Jersey 9/11 Memorial Foundation Inc., the sculpture "'Empty Sky' remembers those lost while simply and powerfully connecting New Jersey to Ground Zero." The memorial's twin walls transect a gently sloped mound anchored by a granite path that is directed toward Ground Zero. The length of each wall is exactly equal to one side of the former World Trade Center towers as the height of the wall reflects the proportion of the former buildings if they were lying on their side. The victims’ names from New Jersey face one another on the interior of the brushed stainless steel walls. The walls channel visitors to the location in the Manhattan skyline where the former twin towers once stood. The berm surrounding the walls rises to 10 feet and gradually returns to the level of the promenade creating an amphitheatre-like incline that faces Lower Manhattan.

Now in its 54th annual season, the National Chorale continues its record of excellence in music education and performance with its extensive vocal music education program in New York City schools, including the Professional Performing Arts High School, as well as a season of virtual programming. The National Chorale is the only professional choral organization to establish and maintain an annual choral-orchestral series in a major New York City concert hall — for 53 years at Lincoln Center — with additional concerts at Carnegie Hall. The chorale has created and presented the Handel’s Messiah Sing-In at Lincoln Center every December with an audience-chorus of 3,000 singers. Their repertory also includes major a cappella works from the 16th century to our time and its continuing series of 20th and 21st century American classics. The National Chorale has toured since 1967, presenting choral concerts, vocal/instrumental chamber music, Messiah Sing-Ins, American music theatre concerts, contemporary music and concerts for young people. It also presents the leading vocal music education initiative in New York’s public schools. Every year, through the National Chorale’s programs, more than 15,000 children in elementary, intermediate and high schools participate in choirs and develop their skills for lifelong enjoyment of singing.

The Soldiers’ Chorus, founded in 1957, is the vocal complement of the United States Army Field Band of Washington, D.C. The 29–member mixed choral ensemble travels throughout the nation and abroad, performing as a separate component and in joint concerts with the Concert Band. The chorus has performed in all 50 states, Canada, Mexico, India, the Far East and throughout Europe, entertaining audiences of all ages. The musical backgrounds of Soldiers’ Chorus personnel range from opera and musical theatre to music education and vocal coaching. In addition to presenting selections from the vast choral repertoire, chorus performances often include the music of Broadway, opera, barbershop quartet and Americana. This versatility has earned the Soldiers’ Chorus an international reputation for presenting musical excellence and inspiring patriotism. Notable performances include four world fairs, American Choral Directors Association conferences, music educator conventions, Kennedy Center Honors Programs, the 750th anniversary of Berlin and the rededication of the Statue of Liberty.

The United States Army Field Band has been thrilling audiences of all ages for more than six decades. As the premier touring musical representative for the United States Army, this internationally-acclaimed organization travels thousands of miles each year presenting a variety of music to enthusiastic audiences throughout the nation and abroad. Through these concerts, the Field Band fosters the support of the American people for members of the armed forces and supports diplomatic efforts around the world. Since its formation in March 1946, the Field Band has appeared in all 50 states and in more than 30 countries on four continents. The organization’s four performing components, the Concert Band, the Soldiers’ Chorus, the Jazz Ambassadors, and Six-String Soldiers, each travel over 100 days annually. Tours include formal public concerts, school assemblies, educational outreach programs, festivals, and radio and television appearances. The United States Army Field Band is considered by music critics to be one of the most versatile and inspiring musical organizations in the world. Its members, selected by highly-competitive audition, represent some of the finest musical talent in America. More than six decades as the military’s most traveled musicians have earned them the title, “The Musical Ambassadors of the Army.”