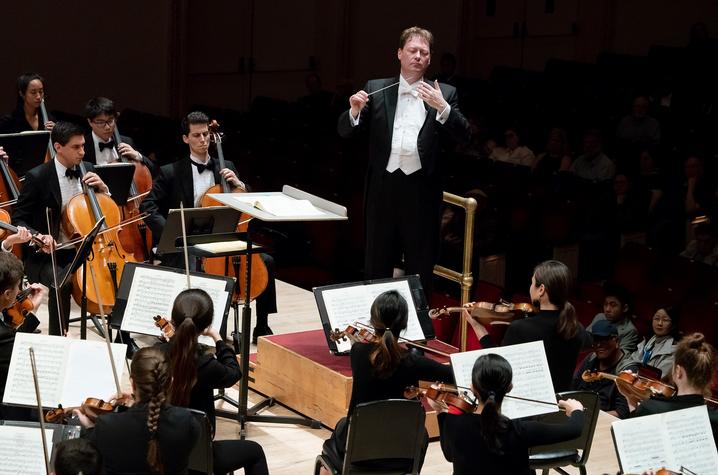 UK Symphony Orchestra, under the direction of Maestro John Nardolillo, will join forces with UK Chorale and The Lexington Singers for a Valentine's Day concert your loved one will never forget.

LEXINGTON, Ky. (Feb. 12, 2020) — Looking for Valentine's Day plans sure to warm your loved one's heart? Join the University of Kentucky Symphony Orchestra (UKSO), the UK Chorale and the Lexington Singers for an evening of romantic music. The concert, featuring the classical music of some of the world's most celebrated love stories, will begin 7:30 p.m. Friday, Feb. 14, at the Singletary Center for the Arts Concert Hall.

The concert will open with the Prelude to "Lohengrin," Richard Wagner’s story of medieval German romance, drawn from the legend of the Knight of the Swan. Next on the program is Wolfgang Amadeus Mozart’s "Coronation Mass," written in 1779 to be performed at the Salzburg Cathedral. The concert concludes with ballet music set to two of the greatest love stories of all time. Sergei Prokofiev’s "Cinderella" is a dark version of the ancient fairy tale, while Maurice Ravel’s music for the Greek legend of Daphnis and Chloé is some of the most beautiful orchestra music ever composed. The second suite from "Daphnis and Chloé" will be performed for this concert in the stunning but rarely heard version for full choir and orchestra. The program will feature soloists graduate student Sydney Carbo, a soprano from Palm City, Florida; voice performance senior Catarine Hancock, a mezzo-soprano from Lexington; voice performance senior Ben Boutell, a tenor from Louisville, Kentucky; and Parker Van Houten, baritone from Louisville.

Maestro John Nardolillo has appeared with more than 30 of the country’s leading orchestras, including the Boston Pops, the National Symphony, and principal orchestras of Seattle, San Francisco, Detroit, Atlanta, Dallas, Milwaukee, Utah, Columbus, Indianapolis, Oregon, Fort Worth, Buffalo, Alabama, Louisville, Missouri, North Carolina, Toledo, Vermont, Columbus, Omaha and Hawaii. He also recently conducted concerts at the Kennedy Center in Washington, D.C.; the Kimmel Center in Philadelphia; and Carnegie Hall in New York. Nardolillo made his professional conducting debut in 1994 at the Sully Festival in France and has since made conducting appearances in the United States, France, Germany, Italy, Norway, Sweden, Denmark and China. He has led major American orchestras in subscription series concerts, summer and pops concerts, education concerts and tours, and for television and radio broadcasts. In 2004, Nardolillo joined the faculty at the UK School of Music, where he serves as the director of orchestras.

UK Chorale is the premier mixed choral ensemble at UK School of Music and is made up of primarily upperclassmen and graduate student music majors. The ensemble prides itself in performing a wide variety of choral literature from Renaissance to 21st century.

Tickets are $10 for general admission, $4 for students, and free for UK students with a valid ID before the day of the performance (at the Singletary Center ticket office). Tickets are available through the Singletary Center ticket office online at www.scfatickets.com, by phone at 859-257-4929, or in person at the venue. Children 6 and older are welcome.